Before the flipper, zooter and slider were widely introduced to spin-bowling’s lexicon, the words ‘Midori’, ‘Vegemite kid’ and ‘undomesticated’ were circulating around Accrington Cricket Club in the summer of 1991.

The Soviet Union had disbanded, Freddie Mercury had just died and South Africa had repealed its apartheid laws.

But in that year, the attention of the cricketing fraternity in this Lancastrian town was on a 21-year-old raw leg-spinner who turned the ball with verve — and fancied using his bat in the manner akin to a golfer teeing off in strong winds.

There was a stint playing in a ‘makeshift nappy’ after ingrown hair surgery, embarrassed wicketkeepers refusing to go behind the stumps and a battered white Ford Escort strewn with cans, cigarette ends and ‘everything’.

It is for all these reasons and more that since Shane Keith Warne tragically succumbed to a heart attack aged 52 while on holiday in Thailand, his former team-mates 31 years on are slowly processing the end of a chapter engrained within club folklore.

Surprisingly, though, if the club had had their first-choice pick, Warne would not have been there in the first place. 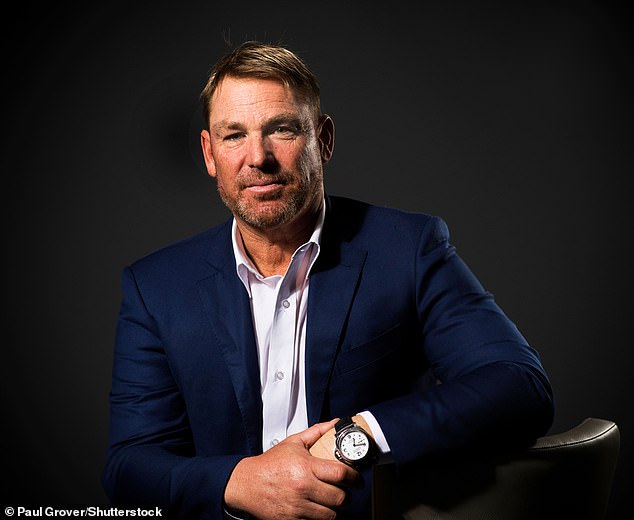 Grief can often elicit a wide spectrum of emotions. Behind the shaken souls of these men in a clubhouse undergoing a full refurbishment — bare walls, paint cans and ladders occupy much of the room — laughter is their way of dealing with this loss.

Andy Barker, who was captain at the time, is first to the crease. The 58-year-old managing director looked after Warne and made sure he settled in.

‘He wasn’t your typical Aussie,’ he tells Sportsmail. ‘You saw Warnie — fat, carrying a lot of timber, loved a McDonald’s, loved his Vegemite on toast and drank this Midori and lemonade, a green melon liqueur. You could see him a mile away with this green thing in his hand, he got me on it as well!

‘I nicknamed him the Vegemite kid. I went to Morrisons, Tesco — none of them had it but Asda did.

‘And he did well with the ladies. They liked him because he was quite fun. He’d say, “This is the one I’m gonna marry”. Weekend after, he’s met another girl — “No, this is the one”. There were six or seven girls who were going to be the “one”.’

However, Warne’s five-month stint in Lancashire on the pitch did not start brightly. He was signed as the club’s overseas professional at the very last minute after first-choice candidate, Tasmanian all-rounder Shaun Young, pulled out with a shoulder injury. 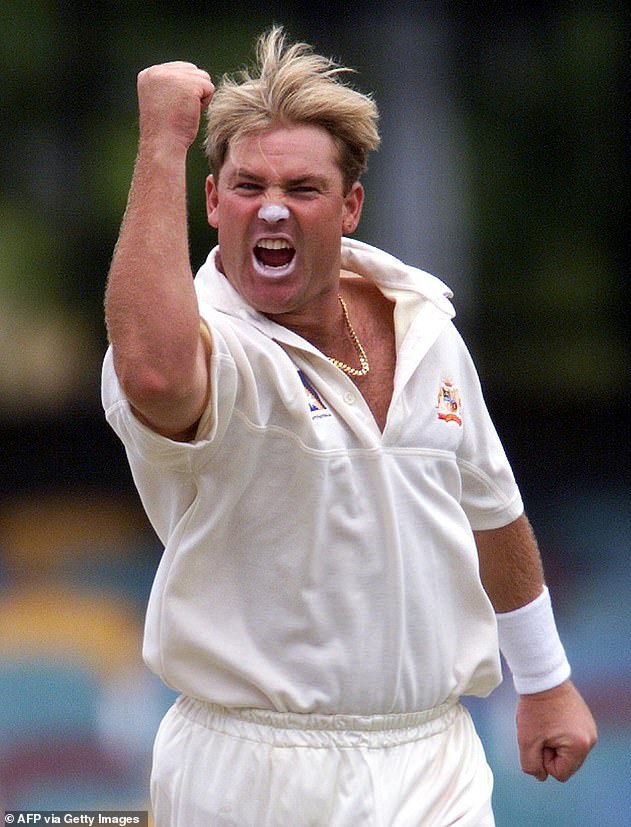 He was run out for two in the opener against Burnley and then dismissed for a golden duck against Ramsbottom in the first home game — the stump cartwheeled to the keeper.

On a bowling front he registered figures of two for 34 from 15 overs and two for 82 from 16 overs.

‘The night before the first home game was meet-the-pro night on Friday,’ Barker recalls.

‘The members were all sitting here and Shane was buying them drinks. He was so friendly, a great person. But when he got his pole knocked out (against Ramsbottom) they all sledged him from walking off, all the way up the steps. These are members who are paying each year.

‘They were ruthless. “What a waste of space you are, you’re rubbish”, “Send him home”.

‘He came and sat next to me and said, “Barks, have you heard what they are saying?” I looked at him and said, “Welcome to the Lancashire league. In this part of the world, this is Test cricket”.

‘I used to go and see him during the week at his house because he needed a lot of reassurance, he was only 21.’

Another couple of barren performances, including a duck and none for 40 with the ball against East Lancashire, raised concerns. The pro was being made to look inadequate with bat and ball.

Action was required and Barker turned to a team-building night where senior players took Warne out on the town. It was to be the turning point.

The leg-spinner bagged five for 46 and bowled a match-winning final over in a first-round cup match against Ramsbottom. Accrington won by two runs. 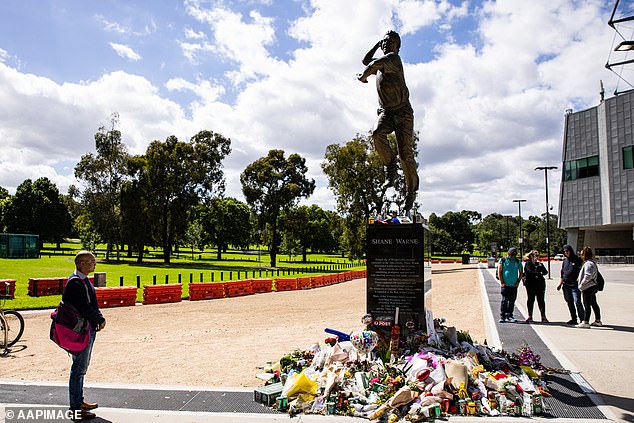 As the season wore on, Warne got increasingly used to the pudding-like Lancastrian tracks and his self-belief grew. He picked up another seven five-wicket hauls in the next 19 games to finish on 73 wickets — the league’s sixth best bowler.

The high international calibre that season meant he wasn’t even the most prolific Aussie in the league: Colin Miller (108), Chris Mack (77) and Joe Scuderi (75) all trumped him for wickets.

But runs remained elusive. His highest score was 51, with an average of 14.95. The league’s 73rd best batsman. A truly remarkable figure considering he was to strike nine Test 50s in his career.

Barker continues: ‘His batting was a bloody nightmare, even though he would tell you he could bat. He made one 50 that season.

‘At times he thought he was Brian Lara. He didn’t know what a defensive shot was.’

Solicitor Billy Rawstron, 58, was the primary wicketkeeper. Embarrassment and fury were commonplace as the ball often zipped past his gloves. The mention of their overseas pro’s batting is enough for him to get his own back.

‘I think everybody here knew he was a special talent. But no one thought he’d be this good. Somehow, he developed the control,’ explains Rawstron. ‘But he thought he could bat. He couldn’t. All of a sudden his head would go and he’d go bang. His patience when batting wasn’t his strength.’ 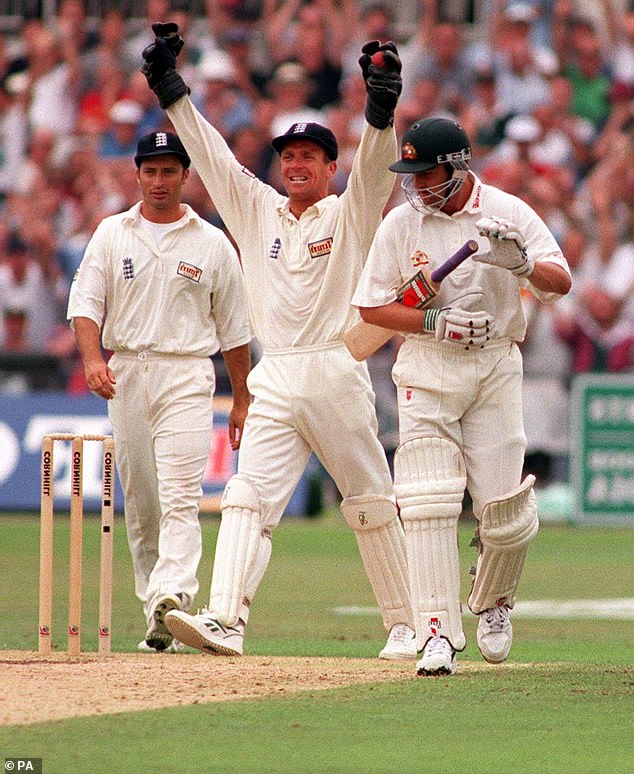 Warne’s five-month stint in Lancashire did not start brightly. He was signed after first-choice candidate, Tasmanian all-rounder Shaun Young (right), pulled out with a shoulder injury

How about wicketkeeping to Warne? Fear emanates from his eyes. ‘That ball is going quicker than from any other amateur bowler in the league.’

Rawstron is left ashen-faced when recalling a match in which three wicketkeepers were required because of Warne’s repertoire.

‘When it came to the game Warnie had totally forgotten. Warnie scratched his a***, you’d think he’s going to bowl the leggie. So Billy would go to the left and the ball would go the other way.

‘It went on for about two overs. The batsman had not scored a run and yet they’re on 33! Warnie said, “Leave me to it” — the same thing happened again in the third over. Billy just threw the gloves to the ground, took off his pads and walked away.

‘Morris Whittle then took the gloves but the same thing happened. The googlies would turn too much, and we couldn’t pick it properly.

‘I told him, “You can’t bowl googlies”. Shane was frustrated and swearing. I said, “You’ve got to give these guys a chance, they aren’t the same standard you’re playing with in Australia”.’

A third keeper was later summoned to keep wicket.

‘Byes was the top scorer against Accrington all season. It was going for more than 20 a game!’

Despite his wickets, a lack of runs meant the Accrington selection committee opted against pursuing him for a second season. A pro in their eyes had to perform with bat and ball; finishing second bottom with just five wins and 21 losses that season did not help.

The following month Warne was picked for Australia B’s tour of Zimbabwe. Barker received his Australia Under 19 shirt as a thank you. The rest, you could say, is history. 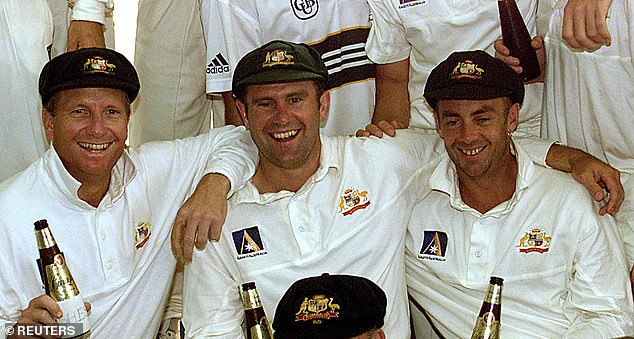 The high international calibre that season meant he wasn’t even the most prolific Aussie in the league: Colin Miller (R) (108), Chris Mack (77) and Joe Scuderi (75) all trumped him for wickets

Ask Warne’s team-mates about his commitment to raising standards and they will wax lyrical about the introduction of professional drills and the numerous extra hours he spent bowling in the nets. But it was his other exploits that these men equally cherished. The mention of his ‘filthy’ terraced house on Westwood Street brings grins all round.

‘His house was a tip. It was a nice house before he got it! He used to offer me a brew but I’d never have one because his sink was piled up,’ says Barker. ‘I said, “Warnie, you’ve got to wash up. It doesn’t happen by itself. We haven’t paid for a cleaner”. Domestication wasn’t his best suit.’

School sports coach Steve Juliff, 57, particularly remembers his day in the stands behind the bowler’s arm at Old Trafford on June 4, 1993. The ‘Ball of the Century’ day, in which Warne castled England batter Mike Gatting with a ball viciously turning square from outside leg stump to hit top of off.

‘The crowd were giving him so much stick because he had the earrings, they were singing “Ohhh Neighbours, Neighbours”, “Hiya Shane, love your earrings Shane”,’ he says.

‘When he had (eventually) come down to the boundary after that Gatting ball, everyone was deadly silent.

‘He saw me and said, “All right Juliff”. He then started to play around with his earrings, with his hair. I was proud he was part of our lives.’

‘We played Bacup and hail was coming down and he wouldn’t come out of the changing room!’ he laughs. 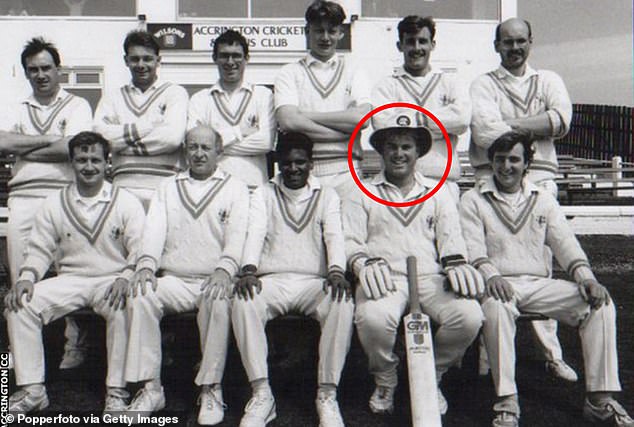 Warne (circled) had an attachment to Accrington (above). Every time he toured England, a visit to ‘Accy’ would be pencilled in

‘He was looking in everyone’s bags for jumpers and he was just getting bigger and bigger with all these jumpers on.’

Barker adds: ‘He said, “We’re not playing in this weather, are we?” He couldn’t believe it!’

Neither could his team-mates believe the state of his white Ford Escort, a car given to him by the club.

‘It was an absolute s*** tip inside. Everything and anything could be inside that car,’ says Barker, before another team-mate interjects: ‘I wouldn’t get lifts in there. It was full of fags, cans and McDonald’s wrappers!’

At this point, each former team-mate is now queuing up to reel off their Warnie story. HGV driver Neil Holmes, 50, has one up his sleeve.

He begins: ‘He had an ingrown hair on his butt cheek but if he didn’t play, he wouldn’t get paid and he needed the money.

‘So he had surgery and played with this big nappy on. He did that for a couple of games. You could tell it was under his trousers in the field!’.

A sense of sadness comes to the fore after nearly two hours of jokes and the warmth of reflection.

What was previously not known outside this town was Warne’s attachment to Accrington. Every time he toured England, a visit to ‘Accy’ would be pencilled in. He even rang his old captain for encouragement before the Test that cemented his name into cricketing legend. 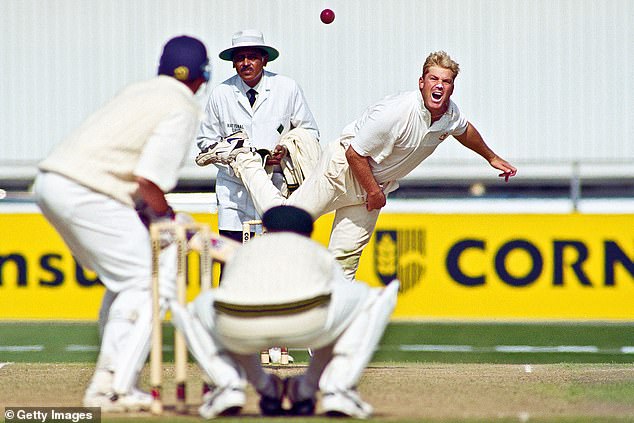 Barker says: ‘Two days before that Test at Old Trafford, he phoned to tell me he was playing.

‘He said, “I’m a bit nervous” and then said we should meet up. Every time he came over to England he’d always phone us up from the team hotel to meet him somewhere. We’d secretly take him into Accrington and no one knew.

‘We went to clubs and pubs but we were protective of him. He’d even pay for his own taxi back.’

The group smile in reflection. It’s only right for his confidant to give the final word on a beloved friend.

Barker adds: ‘He was part of our club’s history, heritage and our lives. We can all tell you a story, have a laugh about it but we all miss him.

‘He’s the closest thing to the Michael Jordan of cricket. That’s how ground-breaking he was.

‘When people like that come into your life, you don’t realise how lucky you are to have met them. But he was a genuine bloke, a great father, loved his family and loved his friends, very loyal to his friends.’