Sydney Thunder spinner Samantha Bates has admitted the side is feeling the loss of skipper Rachael Haynes, after Wednesday’s loss to the Melbourne Renegades saw them slump to a five-match winless run to start the season.

Australian vice-captain Haynes withdrew from the entire WBBL season due to a combination of injury, parental leave and state border closures which means the young side is missing much-needed experience.

Her withdrawal from the defending champions squad led to the appointment of 19-year-old Hannah Darlington as interim skipper, but it has been a less-than-ideal welcome to the role.

The Thunder once again felt short on Wednesday, the Sydney side falling 9 runs short in their chase of Renegades’ 5-142.

Bates said the team was disappointed with the string of losses and was feeling the pain of Haynes’ withdrawal.

“Rachael has been a huge part of this team for seven years now, but we knew Rachael couldn’t play cricket forever. We knew this day was going to come,” she said. 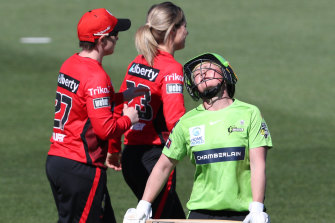 The defending champions are sitting on the bottom of the WBBL ladder this year. Credit:Getty

“We understand we have a lot of young kids in the group and there’s been positive chat around how to get their best cricket out on the park. If we stick together it will come.”

The Thunder is now the only team in the competition without a win this season. Bates said the team’s senior players, which includes herself, feel a responsibility to relieve the pressure which has started to build on Darlington.

“As senior players, we need to take responsibility … to help Hannah,” she said. “We are getting there. Hannah is just soaking up everything she can.”

Meanwhile, all-rounder Erin Burns has been barred from joining the Sydney Sixers after failing to receive an exemption from multiple states. 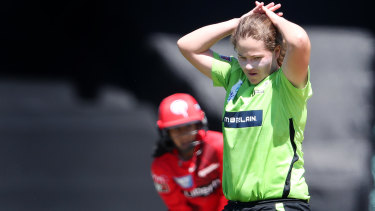 Burns recently returned from playing in England and completed hotel quarantine before spending time with family in Sydney.

Burns had planned to join her teammates shortly after the season’s start in Launceston, but the request was denied by the Tasmanian government.

The Sixers’ have now also had attempts for Burns to join the squad later in the season denied by both the Queensland government and the South Australian government. The Sixers had hoped she would be able to join the team during trips to Adelaide or Mackay later in the year.

Burns said she was shattered by the decision.

Burn’s only hope of joining the club now rests on either the Thunder or the Sixers reaching the finals and for the matches to be hosted in NSW.

“We are disappointed for Erin and her teammates and a little bewildered as to why we were unable to achieve what other sports have, by moving players and families across borders to fulfil their jobs.

“But at the end of the day we respect the decisions and processes implemented by state governments and feel for those people locked out of states that are unable to see family and friends.”