Racing Victoria is in the process of sourcing a second standing CT scanner, after its $1.3 million machine suffered a fault on the eve of last year’s Melbourne Cup.

But that back-up machine, if acquired in time for the spring carnival, won’t be operational ahead of this year’s Cup and will instead simply sit on standby for spare parts if Racing Victoria’s world-leading scanner at U-Vet Equine Centre in Werribee incurs another mechanical issue. 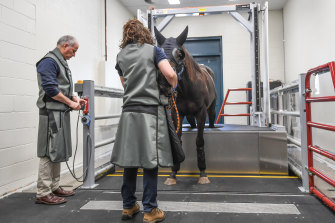 Racing Victoria is in the process of searching for a second CT scanner to bolster its injury-prevention technology assets.Credit:Racing Photos

The X-ray machine was out of action for at least four days in the week before last year’s Melbourne Cup as Racing Victoria waited for a replacement part to be flown in from the USA. The delay forced authorities to change the mandatory vetting requirements for 16 of 35 nominated horses ahead of the race.

It proved successful last year in picking up issues with Cup aspirants Young Werther and Harpo Marx that otherwise wouldn’t have been identified before the race. But that was before a mechanical issue brought the scans to a halt.

The standing CT scanner was a joint $1.3 million investment by Racing Victoria, the state government and University of Melbourne in 2019. The world-class machine allows three-dimensional imaging of lower limbs and identification of otherwise undetected bone damage, and does not require horses to undergo heavy anaesthetic.

While Racing Victoria says a decision is yet to be made regarding how the new scanner will be funded, a submission is expected be made to the state government to contribute a grant from the Victorian Racing Industry Fund towards the cost of the scanner.

Racing Victoria’s executive general manager of integrity Jamie Stier said adding to the racing industry’s injury-prevention capabilities was an immediate priority, with hopes for the machine to be fully operational by the 2023 spring carnival.

“We’re working on that as we speak, in obtaining a second CT scanner and potentially a PET [positron emission tomography] scanner, which is another form of scanner that we’d like to add to our processes,” Stier told RSN radio on Thursday morning.

“They won’t be operational as such for this year’s spring carnival, but our logic at the moment is trying to ensure the second CT scanner at least is located here in Australia … and should the need arise that any part required due to the Werribee scanner becoming non-operational, we’ll be able to go to that scanner and take the part from that scanner, and that will alleviate the time pressures associated with it. 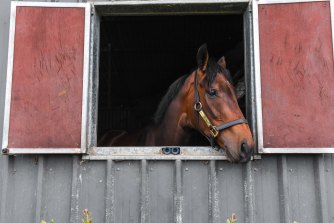 “[It] is aimed at ensuring the Werribee scanner continues to be operational and offers us the redundancy we need in the event of another unfortunate breakdown.”

In a statement on Wednesday, Racing Victoria said the acquisition of the new scanners would expand the capabilities of its year-round “Medicare for horses” scheme, which subsidises the cost of using the scanners for locally trained horses.

Meanwhile, Racing Victoria will not boost the prizemoney of its $5 million All-Star Mile after the race lost its status as the world’s richest 1600-metre race.

The Hong Kong Jockey Club announced on Wednesday that it was boosting its group 1 Hong Kong Mile – run at Sha Tin on International Races day in December – to $HK30 million, which equates to about $5.15 million.

It once held the crown as the world’s richest race, before Racing Victoria introduced the All-Star Mile in 2019.

“If it’s not the richest mile race, we won’t be able to promote it as that,” Racing Victoria’s executive general manager of racing Greg Carpenter said of the All-Star Mile.

“I think $5 million as prizemoney is very strong. We wouldn’t be increasing prizemoney because the Hong Kong Mile has gone up, simply to say the All-Star Mile is the richest mile in the world.”