Sam Northeast probably never imagined he might one day be mentioned in the same breath as Sir Donald Bradman and Brian Lara.

Yet the unsung English batter has just joined the Aussie nonpareil and the West Indian maestro in the elite band of batters to have scored 400 in a single first-class innings.

Northeast, a 32-year-old who’s never quite made the grade to international honours, recorded the 21st century’s highest individual score – 410 not out – in a county championship division two match for Glamorgan against Leicestershire on Saturday.

Better still for the man often talked about as perhaps the best English batter never to be selected for his country, Northeast’s monumental knock at Leicester’s Grace Road enabled Glamorgan to pull off a victory by an innings and 28 runs – with a bit of help from his Australian friends.

But the day belonged to Northeast, who made hay with his sixth-wicket partner Chris Cooke (191no), allowing Glamorgan to earlier declare on 5-795 in reply to Leicestershire’s 584, before the Welsh county then dismissed their opponents for 183 in 59.4 overs.

Northeast joined Lara, Archie MacLaren and Graeme Hick as one of only four players ever to score more than 400 in an innings in England.

“It’s truly special to be part of the list of names … it’s just crazy, people keep telling me what a special achievement it is,” an incredulous Northeast said afterwards.

“To get the team win topped off a special day for me. It was an unbelievable group bowling performance spearheaded by ‘Hoges’ and ‘Ness’.”

Northeast, whose previous best was 191, now boasts the ninth-highest individual score ever after striking 45 fours and three sixes off 450 balls, while sharing an unbroken stand of 461 with wicketkeeper Cooke. 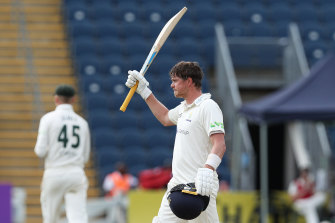 Dropped at slip on 96, he began the morning, in which he and Cooke rattled up 232 runs, by eclipsing Steve James’ 309 not out as the highest score ever for Glamorgan.

Northeast, by nature a textbook strokemaker, had only cleared the ropes once but with the 400 landmark and a lunchtime declaration looming, he threw caution to the wind, hitting Roman Walker over long-on for six to go to 402 before topping Hick’s 405 with another next ball.

When he went past Lara’s 400, made against England in 2004, it became the biggest score compiled this century.

MacLaren had been the first man to hit a quadruple century back in the 19th century while Australian great Bill Ponsford was the only one to make a pair of 400s, before Lara eclipsed him with his quadruple and quintuple tons.