A friend asked me a searching, hypothetical question after the recent Melbourne Test: how would the Australian batters have fared against the Australian bowlers on the MCG wicket? The pitch was the best I have seen there since 1977. That is as much a tick for the current pitch as an indictment of the poor wickets offered at the MCG for decades.

I think our bowling stocks currently are healthy. Our bowlers would have been a handful for even a batting side containing Kohli, Williamson, Azam, Labuschagne and Smith.

So, my answer was a rather diplomatic: even the best would have been highly challenged.

While the media focus is on tipping a bucket on the English players and coaching staff – who cannot be completely exonerated – to my mind this ignores the real reason for their abject failure: the lack of cricket expertise of directors on the England and Wales Cricket Board (ECB).

In the corporate world, when things go wrong, the buck stops with a company’s leadership. However, in cricket, it is solely the players wearing the blame!

Experience has taught me that poor performance on the field has a direct link to what is happening off it. Successful clubs, states, counties and countries have strong administrations. 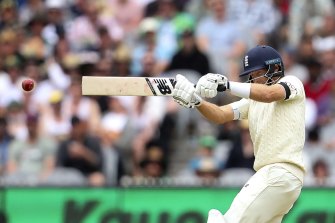 It’s unfair to blame Joe Root for England’s demise when their problems clearly run much deeper.Credit:AP

There is not much point blaming the hapless Joe Root for all the ills of English cricket. His resignation or sacking will not make an iota of difference to the quality or quantum of players available or worthy of Test honours. Instead, England have to take a long, hard look at their structure and decide whether they want to excel at the long form of our game or merely delight in the gimmickry and shenanigans of their various short-form circuses, supposedly catering to the box office.

None of the ECB directors’ CVs reveal an intimate familiarity of the elite levels of the game. The corporatisation of cricket appears total. This is a salutary lesson for Australian cricket too, which is flirting with great, virtue-signalling buzzwords such as governance, administration and diversity, as if those worthy concepts are the exclusive domain of today’s corporate leaders and unachievable if left to lifelong cricket people.

I have absolutely no idea what rare skills so many non-cricketing people bring to the various governing boards of cricket, which so enthral the cricket establishments of England and Australia.

The production or floor manager of a company does not take the fall for repeated bad annual performances of a company. The chairman, managing director and the board of directors do, or should. They are the ones who are always held to account by investors and financial institutions.

So, why is Root – the beleaguered production manager – facing the sack? The governance, strategy and execution of the company itself is deeply flawed. The production manager has had nothing to do with it. He is merely manufacturing products with the raw materials, machinery, resources and tools given to him. If all these factors of production are not optimal, the end manufactured product will be suboptimal.

With three successful formats already, why did the ECB feel the need to invent another? It was possibly because the foray into domestic T20 cricket failed as it was based on the county structure of 18 teams and the quality was disappointing.

The one/only aspect of The Hundred that is positive is it has introduced a city-based competition of eight teams. This concept needs to be extended to four-day cricket.

One of the drawbacks of tradition is that it perpetuates a system not designed for current needs. If cricket was starting from scratch, most countries would not replicate what they have inherited. They would build something much leaner and more efficient.

England have too many mediocre players at the domestic level, diluting the competition. If their best talent played in an eight-team competition, the standard would improve beyond belief.

If Test cricket is worth saving, then more red-ball cricket must be played by developing players. The preponderance of white-ball cricket has improved the quality of hitting in the game, but done nothing for developing the more diverse skills required to become a class batter capable of withstanding quality bowling on challenging surfaces and going on to make big scores.

The clean broom for English cricket must start at the very highest levels. Those are the decks that need to be cleared immediately, and cricket people who understand our game, and are not interested in the short-term fluctuations of its fortunes, put in charge.

I am staggered that a country of 67 million can consistently lag a country of 25 million, at cricket. Lag is a kind word, for the Ashes have been lost in a mere 12 odd days of totally one-sided, even humiliating, cricket.

The counties are going to resist any move to reduce the number of teams. This is where the board must earn its stripes. However, only people who understand the game and its complexities can have a role in this process.

The ECB must involve proud and distinguished captains like Atherton, Cook, Gooch, Gower, Hussain, Strauss and Vaughan – and not just give them a token role on some advisory committee. Pick their brains. Engage them, remunerate them. They know that if you look after the cricket, the box office will look after itself.

The other question that must be addressed is: what does the investment into coaching bring to the table? It certainly isn’t making an appreciable impact on the most important part of the game: mental skills. I suggest that if the current coaching staff of the team returned to England right now, there would be an immediate improvement because the players would start taking personal responsibility for all aspects of their cricket.

The current English team is a result and reflection of the shortcomings of its system.

The ECB has to acknowledge that and start remedial action. Failure is not an option. The country that invented cricket cannot languish anymore and be its widely scorned, perennial under-performers.

The English public deserves much better of its cricket board.