A blistering century by Alex Hales has propelled the Sydney Thunder to the highest-ever Big Bash total and a 46-run defeat of the Sydney Sixers at Adelaide Oval on Friday night. 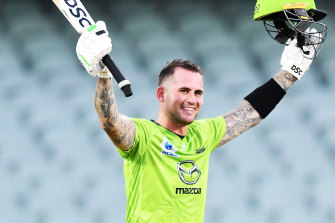 The knock of 110 runs off 56 balls marked the second century of the season and pushed Hales to overtake Sixers star Josh Philippe as BBL10′s leading run-scorer. Credit:Getty

Ahead of the fierce battle, both sides were seemingly united ahead of the match in responding to the backlash from Prime Minister Scott Morrison on Cricket Australia’s decision to erase the term Australia Day from their Tuesday Big Bash fixtures.

Veteran Indigenous star Dan Christian took to Twitter ahead of his 100th game to respond to comments from the Prime Minister, who labelled the move “pretty ordinary”.

“@ScottMorrisonMP read the room Mr Prime Minister. @CricketAus are leading the way because your government won’t. There’ll be millions of kids watching our @BBL games on the 26th January, and they’ll see us taking a knee against racism, and promoting inclusion for all. Take note,” he wrote.

Thunder star Usman Khawaja backed up his opponent’s stance, retweeting Christian’s tweet in support and adding his own reply.

“I think for ScoMo to say to CA “a bit more focus on cricket and a little less focus on politics” is pretty petty. CA could say the same thing vice versa but what’s that going to solve. Someone needs to take action to figure out what works for us as a nation. Well said mate,” he wrote.