Australians have been advised to reconsider their need to travel to Sri Lanka a matter of weeks before the men’s national team was due to tour.

Civil unrest, culminating in the resignation of Sri Lanka’s prime minister this week and violent protests in the capital Colombo, have forced the redesignation by Australian authorities. 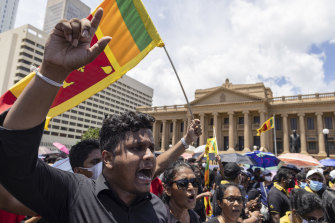 Demonstrations in Sri Lanka during the current bout of civil unrest.Credit:Bloomberg

The Australian team is due to travel to Sri Lanka for three Twenty20 internationals, five ODIs and two Tests in June and July. An Australia A tour is also due to take place concurrently.

“We now advise you reconsider your need to travel to Sri Lanka due to the security situation,” the travel advice states. “Several violent incidents have taken place during large demonstrations. Avoid demonstrations and events that draw large groups. Follow the advice of local authorities and monitor the media for updates.

“A public emergency has been declared in Sri Lanka and an island-wide curfew imposed. Carry relevant travel and identification documents with you at all times. Public demonstrations continue to occur throughout Sri Lanka. They can also lead to disruptions to traffic and public transport.

“You may experience disruption to fuel supply and planned, lengthy power outages. Import delays may impact your ability to access some medicines and food items.”

The change in travel advice brings Sri Lanka to the same “reconsider your need to travel” risk level as that of Pakistan, where the Australian team recently toured successfully for the first time since 1998.

CA and the Australian Cricketers Association have conducted separate pre-tour visits, by Stuart Bailey and Brendan Drew respectively, to inspect tour arrangements, prior to this week’s upheaval.