Selections based on a soft track.

1. Into The Oblivion doesn’t have a great strike rate but has the best form of late and handles a wet track okay. Made a late bid to just miss at Gosford last week and if he runs up to that he’s a chance to break through. Just a little bit short priced for his record.
Dangers: 6. Celabitofkandi is an improving mare who hit the line well here over a mile then rounded them up at Tamworth just in time over the same trip. Shapes as though the 2000m will suit, question mark on a wet track. 4. South Bend is proven on a heavy track and at the distance with three straight runs at 2000m plus. Another with a fair strike rate but an each-way chance. 5. Colonnade has been around the mark of late though a wet track is a concern for him.
How to play it: Into The Oblivion WIN; Trifecta 1/ 4,5,6/4,5,6; Odds & Evens: SPLIT. 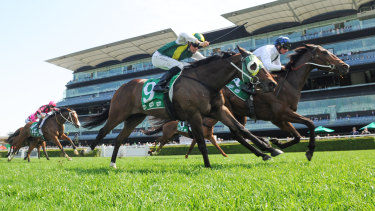 Fair Dinkum (No.9), pictured running second to Marokawa in a Highway at Rosehill, goes around in race five.Credit:AAP

10. Rubick’s Magic is an interesting runner first-up for the new stable and with a very nice barrier trial under her belt. Went with Casino Mondial in a Taree heat a few weeks ago and while drawn wide she looks well placed on that in a winnable maiden.
Dangers: 3. Anamagic had her first run for the new stable and dropped from 2000m to 1100m when an even seventh at Port Macquarie. Extra ground will be in her favour and you’d expect her to improve. 8. Always Hot contested the same race as Anamagic and ran fifth as favourite, holding her ground without threatening a heap. Drawn nicely and wouldn’t discount her yet. 7. Super Lucky Plucky was full of running in her recent trial at Newcastle and if there’s any support for her it would be encouraging. Each-way on face value.
How to play it: Rubick’s Magic E/W; Odds & Evens: SPLIT.

3. Sebago drew wide and settled well back before finding the line very well first-up at Port Macquarie off over a year’s break. Fitter and drawn perfectly here, bar plates off and up in trip. Plenty of positives, should run well.
Dangers: 1. Grand Anthem started favourite first-up at Ballina and ran on well without threatening at 1000m. Tough alley for him here but much better suited it seems up in trip and well worth including in everything. 7. Lage is yet to run a place in eight starts but she hasn’t been far off it of late. Held on well at Port Macquarie running foruth then filled the same spot at Grafton after leading. Each-way claims. 13. The Timewarp is a 17-start maiden but has been around the mark of late, placed here three starts back and ran on well beaten two lengths at this track again three weeks ago. Has a show.
How to play it: Sebago WIN; Odds & Evens: ODDS.

13. Ocean Nymph is a double-figure price but has found an open race and comes into this third-up. Very handy fresh run then just even last time in a decent BM58. Looking for the extra trip and wouldn’t shock if she runs a big race at odds.
Dangers: 1. Justice Honour seems to like a wet track and will find this easier than last start at Newcastle where he was only beaten a couple of lengths. Blinkers back on, can mix form but gets a good chance to show up. 4. Scatter Blast ran well in a C3 three runs back and won in the last stride at Tamworth. Just a fair effort at Scone in his latest but does tend to like a wet track so can’t be overlooked. 2. Opinions was a Wyong winner over this trip three runs back and battled on fairly well in a stronger race than this at Gosford a month ago. Has a genuine chance.
How to play it: Ocean Nymph E/W; Odds & Evens: ODDS.

8. Bill ‘N’ Ted did more than enough first-up at Taree, despite being a beaten favourite, under 62kg to think he will improve with the run and the lighter weight. A soft track is okay and he rarely runs a bad race. Hard to beat.
Dangers: 5. Evil Cry gets a 5kg weight drop on his win at Port Macquarie back in October. Interesting runner here off that break, was okay in soft and heavy ground in stronger company before switching stables and has to be respected. 9. Fair Dinkum was placed in a Highway on a soft 7 back in September. Fitter for two runs back and overlook his latest as his fresh run was solid. 15. Good Excuse is probably better over 1400m or so but on a wet track could be dangerous fresh. Is a heavy track winner and on his home track.
How to play it: Bill ‘N’ Ted WIN; Trifecta 8/5,9,15/5,9,15 Odds & Evens: SPLIT.

5. Miss Fox looks a promising type and only has to handle the soft conditions to be the horse to beat. Dominant first-up in a maiden at Taree at a very short price. Class rise is modest and she has the upside.
Dangers: 4. In A Step hasn’t raced since August when missing a place for the first time at Coffs Harbour. No trials but she’s shown plenty of ability and is entitled to another chance fresh. 10. Gold Bracelet gets the blinkers on first time and won on a heavy track at Taree on debut so commands some respect on that. In the market when disappointed at Newcastle but worth another look. 6. Monica’s Star is another lightly raced filly who resumes off an impressive win at Port Macquarie in October. No public trials but trained here and is one of the chances.
How to play it: Miss Fox WIN; Trifecta 5/4,6,10/4,6,10; Odds & Evens: SPLIT.

3. The Drake is a talented type who beat a good field at Coffs Harbour a month ago and on that has to be a big show. Only failure was at Eagle Farm at 1000m so overlooking that. Drawn okay and should be very competitive in a tough race.
Dangers: 13. Bellastar was a dominant winner of the Queen Of The North, a race which produced a finalist through this race last year. She was very strong there so 1400m won’t be a worry and a soft track gives her a big show. Heavy might be a worry. 2. Casino Mondial is first-up since late November running third at Port Macquarie in open company. Wet no issue, his recent trial win was strong and should be in this for a long way. 4. Gumshoe led all the way at Gosford last week, handles a wet track and just has to run out the 1400m to be a big chance. Draw gives him that chance. Definite threat.
How to play it: The Drake E/W; Box quinella 2,3,4,13. Odds & Evens: ODDS.

7. Enchanted Heart is working up to a win and has found a good race to achieve that. Sound at Gosford then ran on well at Newcastle in a handy field. Yet to see worse than soft 5 but into her preferred distance range now and is a top chance.
Dangers: 14. Eurogem bolted in at Port Macquarie two runs back then beaten favourite there a month ago though not disgraced. Barrier one a plus and if she handles the going she’s right in this. 8. Hubble has won just one from 20 but is around the mark lately so has an each-way chance. Ran on well for third at Tamworth last time and handles a soft okay. 13. She’s Independent has put two wins together at this track at double figure odds and no reason why she couldn’t be competitive again. Wet track form isn’t great but wasn’t going as well last time she struck one.
How to play it: Enchanted Heart WIN; Trifecta 7/8,13,14/8,13,14. Odds & Evens: SPLIT.