Potentially strong and handy maiden to get us rolling. Keen to be aboard Frankel three-year-old 6. Tradition returning off a 15-week break as a gelding. First run in this region after switching back from Victoria, and draws the inside behind an eye-catching quiet trial where he settled back and brushed through the line nicely under a good hold. 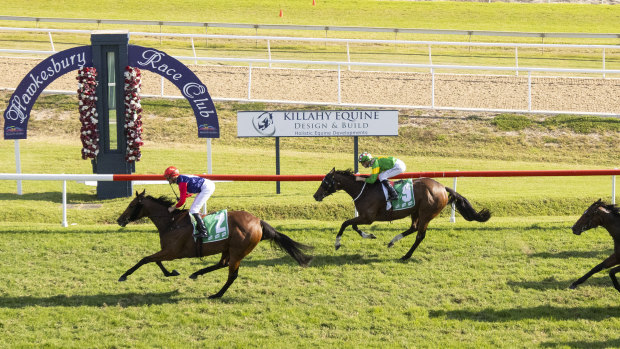 Racing returns to the Hawkesbury track on Thursday.Credit:Getty

Dangers: Must respect emerging filly 9. Lonrioli who was right behind the place-getters after tracking the speed on debut, and draws to get an even softer run here. Shalaa filly 5. Eagle Next can figure at her second start after chasing home the winner on debut at the provincials when solid in the market; while stablemate filly 7. Estilete improves sharply with blinkers added.

How to play it: Tradition to win. Odds and Evens: Split

Liked the first-up provincial run of progressive filly 5. Yankee Hussel. Took on group company back in autumn as a two-year-old, and can settle a little closer here over a shade more ground.

Dangers: Another one back as a gelding and having his first outing for the leading home track stable, five-year-old 1. Phearson will be hard to stop behind two strong trials. Was placed in all three runs at Canberra in first prep when well in the market. Gap to the rest headed by local four-year-old 2. Superargo resuming off a forward trial; while 4. Noble Attack can run into the minor end of the money.

How to play it: Yankee Hussel to win. Odds and Evens: Odds

This shapes nicely for promising three-year-old 7. Coppelson who has been given four weeks and a very quiet trial since surging home in heavy ground to win on debut at the provincials.

Dangers: Keep safe home track mare 8. Tycoon Haillie who will settle back from the inside draw and hit the lune hard third-up; while local stallion 3. Critical Time drops back from deeper Midway class fourth-up from a softer draw with blinkers coming off.

How to play it: Coppelson to win. Odds and Evens: Split

Got a stack of time for untapped Shalaa colt 8. Sir Ming who can go one better here after a torrid first-up a run at this track a month back. Tuned up with a dominant trial win, leading jockey sticks for the real thing, and blinkers added is a big key.

Dangers: Stablemate four-year-old 1. Nickelback returns off an 11-week spell and strong city trial. Twice beaten by a neck in handy provincial winter maidens, and draws to find a sweet spot right behind the speed. Another one bursting to break through is lightly raced four-year-old 3. Sir Crackle who was only run down late first-up at the provincials, although has to get over from a tricky gate.

Watch the betting on Spirit Of Boom colt 4. Bundeena who debuts with important gear additions behind two solid trials; while 6. Manzoni and 12. Troika go in trifecta and first four plays.

Expecting Snitzel three-year-old 5. Dashing Legend to make amends at second start with blinkers added after missing by a whisker as a hot favourite on debut at the provincials. Drawn out, but gets through rain-affected ground, and beat all bar the winner in a group 2 as a two-year-old in autumn.

Dangers: Keep safe Foxwedge three-year-old first starter 9. Outlawed after bolting in the second of two trials here; while Dissident three-year-old 10. Shadows Of Love on debut; and 12. Snitcat second-up from a wide gate; head the rest.

How to play it: Dashing Legend to win. Odds and Evens: Split

Always a tactical battle of tempo over a middle distance in this grade. Like improving metro mare 4. Raccolto getting to an ideal journey second-up, and crucially with blinkers replacing winkers. Only got going late first-up on the Kensington track in BM 72 company, but much better off here in a weaker grade, settling back with cover.

Dangers: Provincial five-year-old 2. Bak Da Man has hardly run a bad one in 17 starts and hasn’t missed a place since mid-spring last year, including a heavy track win in country BM 66 grade before being beaten under a length in his next three runs. Worked home well into a place at the provincials resuming three weeks ago, and both career wins so far have come second-up.

Keep safe honest mare 3. Credit Crunch who is over the odds deep into her prep, with weight relief. Include in wider exotics 6. Remus fourth-up; 8. Speedy Song coming off a provincial maiden win; and home tracker 10. Sky Ace who thrashed a modest country maiden field 18 days ago.

How to play it: Raccolto to win. Odds and Evens: Evens

Back in trip for a similar graded field, and progressive five-year-old 1. Crazy Train can go back-to-back stepping up from a smart win in fillies and mares class. Sat back midfield that day at Newcastle and rounded them up with something in hand, and while this is a touch stronger, she draws to get suitable cover and produce another telling final 400m burst.

Dangers: Plenty of them, headed by five-year-old 5. Adios Steve who is much better placed here after doing it tough on-speed in consecutive Saturday Midway races when fading late. Lightly raced six-year-old 6. Shoosha is a big watch returning for her first run in 12 months for a new local stable since transferring down from Queensland. Has trialled okay, draws inside, and beautifully bred by Japanese super sire Deep Impact and out of a group 1 Coolmore Classic winner.

Watch the market too on country mare 2. Easy Rosie who draws to get a nice run on speed, and was only collared late by a smart one in a Federal BM 70 at Canberra three weeks back. Included in wider exotics 4. Too Good To Be Tru who has trialled well, prefers soft ground, and was scratched from Canterbury to be saved for this.

Same grade for the sprinters to close the meeting, and again there are plenty of chances headed by fast improving provincial four-year-old 4. So Good So Cool who can make it two wins from his last three fourth-up. Has hit the line hard from well back in all three runs this prep, and while this is a tougher test, will relish the long run home here in preferred soft going.

Dangers: Must include lightly raced filly 8. Jukebox Flyer from the inside barrier third-up; 3. Centro Storico down in grade fifth-up; while 2. Black Jacamar is a market watch first-up behind two quieter trials.

How to play it: So Good So Cool to win. Odds and Evens: Evens