2. Conspirator’s only ‘failure’ to date in five career runs was when he was squeezed out in the straight in Highway company. He wasn’t going to win but should have finished much closer. Outside of that, it’s two wins and two placings. One of those victories was two back at Dubbo when winning comfortably over 1100m. He then last start matched motors with Hellenism at Randwick in a Highway Handicap. With a stack of speed drawn in and out, Clint Lundholm’s three-year-old should find himself in the right spot from the middle draw. Have gravitated towards the class runners at the top of the weights with 1. Glamour Cat and 3. Depth That Varies next best.
How to play it: Conspirator to win. 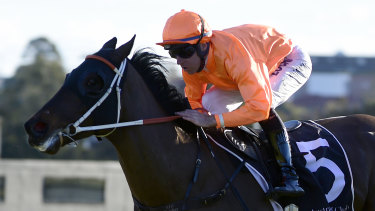 The team of Tommy Berry and Rock proved themselves in group company over the spring and can do so again. Credit:AAP

8. Harmonium won a Gosford maiden over 1000m on debut but liked the manner in which she scooted clear after doing everything right in the run. She clocked a faster overall time than the older horses on the day, and back in fifth was Easy Campese, a colt who ran second to Prague two starts prior. There is no shortage of speed in this but the barrier gives Tim Clark options. Happy to gamble that she can take the giant leap in what looks an even group of fillies. This race looks to set up perfectly for 2. Stellar Pauline, getting the last crack. Peter and Paul Snowden’s maiden has found one better in all three of her runs, the latest of those when second to Away Game in the Magic Millions. That filly subsequently wasn’t far off in the Blue Diamond.
How to play it: Harmonium to win.

8. Argenteus has been deep-ended making his debut in a group2 but on the strength of his latest trial win he deserves his shot. The blinkers went on at Randwick and he won his trial with something up his sleeve. It was a fast-run heat over the 1050m and like the way Argenteus coasted past the leader Time Is Precious still under a hold. Under more pressure in second was his well-credentialed stablemate 2. Aim. 1. Prague has won two from two, the latest of those beating Global Quest. That horse subsequently ran second to Farnan in last Saturday’s Silver Slipper Stakes. That latest win was 1200m back to 1100m, adding extra merit. Hard to beat, but well found all the same. Be forgiving when assessing Aim’s Magic Millions run on inferior ground.
How to play it: Argenteus each-way.

5. Rock has a wicked turn of foot and that sees him well suited with freshness in his legs over 1300m. The Team Hawkes four-year-old has steadily improved before proving himself a group horse over the spring. After two impressive midweek wins he won the group3 Cameron at Newcastle from last in running before boxing away into fifth in the group1 Epsom. When the son of Pierro won first-up at Canterbury last campaign he broke the track record. Drawn barrier 3, hoping Tommy Berry can settle him midfield giving him an in-run advantage over 2. Cascadian who, for all his talent, has a nasty habit of half missing the kick. 3. Imaging has looked very sharp in his two Australian trials, showing plenty of early speed.
How to play it: Rock to win.

How do any of the mares that fronted up in the Triscay turn the tables on 4. Sweet Deal? They can’t, especially under the weight scale. She had never won first-up before nor had she even placed on a soft track in the past. John Thompson has reported that Sweet Deal has improved since then. Should find the front again, with Blake Shinn replacing regular rider Nash Rawiller. Given how she ended last campaign and has started this one, there’s every chance she is a group1 winner by the end of the autumn. Of the nine other runners only two didn’t line up in the Triscay and
5. Con Te Partiro is the one to fear most. The blinkers go back on after they worked so well for her first-up last preparation when fourth over 1200m behind Deprive, Trope and Bon Amis.
How to play it: Sweet Deal.

1. Flit was a dominant first-up winner of the Light Fingers Stakes, having settled in behind the leaders. The blinkers went on for the first time and that tractability is a significant new addition to her artillery. Assuming the tactics on 4. Funstar are on the negative side, that’s a big advantage over her main danger. Flit looks set to deliver on the promise she has always shown. Did go into the race thinking that only the barrier could beat Funstar, and here we are after she has drawn 14. It’s going to be fascinating to see what James McDonald does from there but she doesn’t map well. 11. Heart Of The Oak is the best roughie, having beaten Positive Peace (won three straight since) last start. Hugely underrated by the market.
How to play it: Flit to win.

5. Fierce Impact was just 0.3L away from making it three group1s on the trot when second to Alabama Express first-up in the Orr Stakes at Caulfield. He is undeniably one of the best milers in the country. Last campaign he won the Toorak second up and then the Cantala. If he improves as sharply second up this preperation as he did over the spring his rivals here, no matter how classy they are, will have one heck of a task in beating him. The ‘blinkerless’ 4. Dreamforce experiment only lasted one run. Whether he finds the front will be up to 7. Homesman. A very good horse in his own right, Homesman bolted in over the mile first-up last campaign. The knock on 3. Te Akau Shark is the price. This is a crack field and he’s a skinny favourite despite having to go back to last in the run.
How to play it: Fierce Impact.

6. Attorney was horribly outpaced first-up but loved his work through the line. This is a much more suitable race than the one he tackled fresh yet he is double the price, although this is a deeper BM88. That was Jay Ford’s first ride on the horse and will have learnt plenty about the five-year-old. We saw what this promising stayer was capable of last campaign, displaying a great turn of acceleration to win his first two starts in Australia. 4. Mount Tabora is on trial at 2000m, but it doesn’t look a problem. He was a strong all-the-way winner at Flemington over the mile last start, running along in the middle stages before still finding a kick. 13. Think It Over was expected to win at Canterbury last start when odds-on but ran like a horse wanting 2000m. Gets that here and drops to 52kg.
How to play it: Attorney to win.

6. Yamazaki has been airborne since transferring to David Pfieffer. The worry is the start she’ll be giving away but her Gold Coast win last preparation had to be seen to be believed. She spotted the leaders 12 lengths turning for home, hit the front at the 100m and won by 3.5L with her ears pricked. First up for her new yard she went to the line with Inanup, a gelding who recently matched it with 1. Roheryn which ties the form nicely into this. Looked good winning a Hawkesbury trial suggesting she has held her form. Likely leader and race outsider 4. Goldfinch has a small claim. This speedy mare has only ever been tried once before at 1200m but she hurtled along out in front only to be collared late. She’ll give cheek.
How to play it: Yamazaki to win.