Open maiden sprint to get us underway. Like four-year-old mare 7. Alight The Night who resumes for a third prep behind a narrow trial win. Proven early in her career she can find the line in all ground and draws to get good cover with blinkers on for the first time. 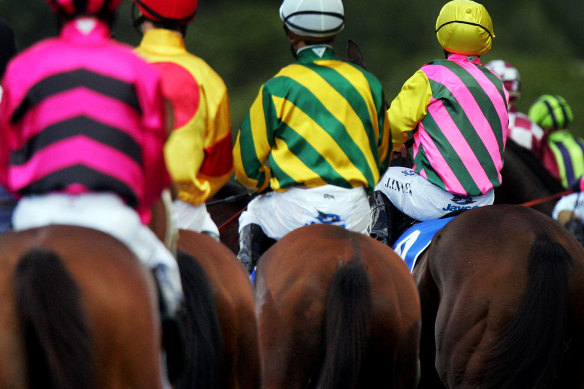 NSW’s feature meeting will me at Grafton on Monday.Credit:Fairfax

Dangers: Drawn right alongside 9. Miss Daurian is also fresh having her first run for the new local stable and bred to do her best on firm ground. Big watch too on progressive three-year-old 13. Powder Man who has run into a place in two runs so far; while at bigger odds both 3. More To Adore third-up from the inside draw; and 11. Shady Milly resuming with blinkers replacing winkers; can both run figure in the money.

How to play it: Alight The Night to win. Odds and Evens: Odds a special

Plain and tough sprint with plenty of hopes, but like the value and placement of ex-Victorian mare 11. Listen resuming with gear changes for a new local stable. Likes to settle back in her races and finish off, and gets much needed firm ground.

Dangers: Improving 3. King’s Gold boasts enough gate speed to off-set the wide draw, and boxed on okay at his second start after leading. Another one drawn off the track, 5. Star Diamond will likely try to slot in around midfield. Hard fit, and if she finds that cover, has a big enough final 400m burst to be in the finish. Was scratched from Armidale on Sunday to be saved for this. Included in exotics 9. Josie’s Spirit 3rd-up; and 13 Miss Starlette also fresh from a soft draw.

Typically, very open and shallow in depth middle distance maiden. Tough home tracker 5. Lampkin Lane is ready to win deep into the current prep. Has attacked the line late in his last two here, but draws to settle a bit closer this time, best form is on firm ground, and only needs a clear run from the turn.

Dangers: Little doubt five-year-old mare 13. Velvet Star is the most talented runner, and has placed in her last two against better opposition, but will need to slot in from the outside barrier. Keep safe 1. Coal Fire who fought on well after leading last start, and gets some much-needed weight relief. Another one who will roll forward, 2. Consensio can give plenty of cheek fourth-up with a claim over more ground. Capable mare 10. Apache Jewel heads the rest at a big price.

How to play it: Lampkin Lane each way. Odds and Evens: Odds

Placed in his last couple from both well off the speed and sitting behind the lead, local six-year-old 3. Volfoni is primed to win again coming back to a weaker race. Shoots back up in weight, but draws to get a nice trail and has clearly appreciated getting back on firmer footing.

Dangers: Resuming for a new Port yard behind two trials, ex-Queensland four-year-old 5. King Shalaa is an immediate threat from a soft draw, and the sire-line is going great guns at the moment. Watch the betting on 6. Another Spirit who is fit and trained on the track; while 10. Lady Tulessa and 11. No Retreat head the rest.

How to play it: Volfoni to win. Odds and Evens: Odds

Lightly raced six-year-old 1. Hidden Trust is the one to beat first-up, with a stack of gear changes. Was never out of a place last prep, including a dominant maiden win with plenty in reserve, and despite not having publicly trialled, comes to hand quickly. By Hidden Dragon, and gets his much preferred dry surface.

Dangers: Big watch too on rival home tracker 4. Durnstein who resumes off a 10- week break, and is smart when fresh in this company. Gap to the rest headed by 3. Minidream who returns from a four-month spell, and was an impressive winner here on debut at bigger odds. Must keep safe 7. The Light Fandango who steps up from a narrow maiden win here three weeks ago.

How to play it: Hidden Trust to win. Odds and Evens: Split

Now for the restricted stayers in what will be a tactical battle. Honest US-bred five-year-old 1. Byakko will find this easier in firmer ground after an even effort at Tuncurry on a Heavy 10. Will need to slot in from a wide draw, but is used to carrying weight, and unlike most of these can win better races than this.

Dangers: Speaking of wide draws, 6. Grand Shanghai was drawn off the track after a good closing run here three weeks back. Has been competitive in deeper races, just needs a stroke of fortune early from the gate. Gold Coast five-year-old 7. Jabbar draws well in a thinner race but still needs to improve sharply; while both 4. Houdini Hudson and 8. Go Ferrando can run into the minor end of the money.

How to play it: Byakko to win. Odds and Evens: Split

Any number of chances here in a moderate race. Gold Coast six-year-old 2. Tabulam has more than enough ability to win, and finds a nice little class drop fourth up. Worked home late in better grade at the Sunshine Coast two runs back before again doing his best work late in similar company. Suited over 200m further here, and looks well treated at the weights back in country CL1 grade.

Dangers: No doubt, 5. I’m Gunna Cashew represents strong each way value deep into her prep, and getting back on firmer footing from a handy draw. Not sure the inside draw does 1. Pedal To The Metal any favours, given he likes to drift well back in the run, but comes off two trials over the border, and if they go along hard up front, he will be storming home. Include in wider exotics, 3. Squeeze Dis fifth-up; 7. Princess Zeddy fifth-up; and 10. Byron Eyes fourth-up with a claim.

How to play it: Tabulam to win. Odds and Evens: Split

We close the meeting with another wide open affair over the mile. Keen on 4. Tribute King third-up. Has hit the line well in two runs back against deeper CL1 opposition, and just needs clear air from the 400m to run over the top here.

Dangers: Capable five-year-old 5. Full Press is hunting a second win in three starts, and likes firm ground, but has a task finding cover from a wide gate. Keep watch on 9. Burlesy who comes down from Qld after four runs this prep; while another border-hopper 10. Avenue Of Heaven is clear best of the rest fourth-up.

Supplied by Racing NSW
Full form and race replays available at racingnsw.com.au.
News, results and expert analysis from the weekend of sport sent every Monday. Sign up for our Sport newsletter