Selections based on a soft track. Monitor for bias/pattern.

Tricky distance race to start and leaning towards 3. One For Betty who is ready to peak reaching her preferred trip. The seven-year-old mare was 34 days between runs last start and was unsuited to settling at the rear of the field in a very slow tempo at Grafton. The Brett Cavanough-trained galloper has winning figures from her previous preparation and expect her to hit the line hard. Each-way. 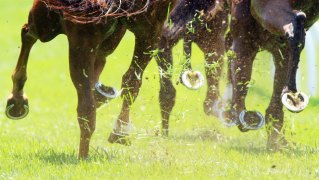 Racing returns to Coffs Harbour on Thursday for an eight-race card.Credit:Jenny Evans

Dangers: 2. Fine Weather ran ok in his first start for new trainer Mark Stewart last start at Rosehill. He can roll forward with a favourable map, has a gear change and will be hard to get past. Forget 1. Ambitious Prince’s last start at Grafton. He can improve back onto his home track and is suited back to the 2000m. Add 5. Honour Me and 7. Italian Tune to trifectas and first fours.

7. Moonlight Grace had significant factors against her at Warwick Farm eight days ago and was still honest, running fifth. The three-year-old filly raced in the inferior ground and was severely checked at a critical stage, losing her momentum and her action. Further, that race rated highly relative to the day, and the decisive margins confirmed the quality.

Before that start, although she was run to suit, she hit the line hard, and ran one of the fastest last 600m splits of the meeting in 37.14. The Allan Kehoe-trained galloper is coming out of time/sectional merit races, is on a backup, the bigger track suits and is well-placed here.

Dangers: Expecting considerable improvement from 6. Miss Espionage who drifted alarmingly $8.5-$17 late in the trade in her debut run. She will appreciate the drying track, maps to have all favours, and blinkers go on for the first time.

1. Cool Amigo contested the Group 3 Black Opal Stakes (1200m) before spelling, and although well beaten, that form line is very strong for this event. The three-year-old colt hasn’t had an official public trial and is a late market watch. 2. Crop Duster maintained a strong finishing speed to the line when scoring at Wellington last start. Add him to all exotics.

How to play it: Moonlight Grace WIN. Odds & Evens: SPLIT.

14. Olakau’atu sat outside the leader in a strong tempo last start in an Open 2YO race at Grafton in a showcase meeting. The gelding raced greenly in the straight with the blinkers on for the first time, but once he put his mind back on the job, he maintained a strong finishing speed to the line. Before that start, he was well backed into favourite on debut $4.8-$3.8, but nothing went right for the galloper, and he had numerous excuses.

The Brett Dodson-trained runner visually looks like an improver, and his ratings/sectional profile supports this. In addition, he will roll forward, has a gear change, a senior rider goes on, returns to his home track, and brings the best last start figure.

Dangers: 9. Papal Miss had no luck last start at Taree nine days ago and should’ve finished closer/fought out the finish. The mare is rock-hard fit, the bigger track suits and can settle closer with a significant barrier change. 15. Marlou Millie, ready to peak third-up, draws well, receives a gear change, and jockey Brock Ryan rides for the first time. 1. Dempsey Rae will have it all to do from the wide draw but is suited up in distance and will be running on hard. Add 5. Sea Of Qi and 13. Zouhaven to trifectas and first fours.

How to play it: Olakau’atu WIN. Odds & Evens: SPLIT.

Open race and leaning towards 3. Mariinsky who represents the value after running well in a fast-time race at Grafton last start. Further, the form out of that race has since been proven with a subsequent winner. The John Sprague-trained runner was slowly away but made considerable ground running well into third behind city-class galloper Kokoro. He will get back throughout transit with a genuine tempo anticipated; expect him to run on well and the drying track suits.

Dangers: 8. Wokenwithakiss follows a similar pattern to last prep, where she produced a career peak figure which can win this race. The four-year-old mare is third-up, reaching optimal fitness; the blinkers go back on, and the in-form Reece Jones goes on board. Chance. 6. Ambridge led at a strong tempo last start at Grafton and tried hard. He receives a significant barrier change, will roll forward and can feature on his best form.

However, some query at this track where he has regressed in figures. 4. Sherriff Cody is rock-hard fit, and Aaron Bullock, who rides, is one start for one win on him. Add 13. Salty Rain who has a starting price profile advantage over some of his rivals.

4. Invictus Felix’s last start had hidden merit in a high rating race at this track 39 days ago. After getting too far back in a high-pressure tempo, the six-year-old had too much to do and then had to make his final run through the inferior ground.

Further, he sprinted one of the fastest 400m-200m splits of the entire meeting in 10.98 before his rivals in the better going swamped him late. The gelding has key factors in his favour here; he has multiple winning figures, races at his home track, Hugh Bowman rides for the first time and is ready to peak third-up.

Dangers: 6. Sound And Vision resumes and has trialled well, winning a recent heat at Scone. He raced in stronger grade last prep for this and can sprint fresh. Consistent type 2. My Snow Queen has been well backed in her past two starts and has solid form lines for this assignment. The mare is proven on the rain-affected ground and brings a competitive ratings profile.

Locally trained 10. Moskeeta broke through for her maiden win at Grafton last start. She is an improver and suited over the further distance. 3. Klopp, the likely leader, can give a sight and must go in trifectas and first fours.

How to play it: Invictus Felix WIN. Odds & Evens: EVENS.

Forget 7. Hidden Hail’s first-up run in the Kirby Handicap (1000m) at Grafton, where the gelding raced four wide in a fast tempo, and the tough transit told. Before that, he trialled well in fast time/sectionals and looked to have come back well. The six-year-old has multiple winning figures for this, will be fitter, and the step up to 1200m is ideal where he can build into his rhythm. He can give a sight. Each-way.

Dangers: 10. Parksville can bounce back after a disappointing effort first-up where he started a well fancied $2.80 favourite at Grafton. The five-year-old returns to his home track, maps well, and a senior rider goes back on. 3. Prince Invincible brings city form and had the pace/bias against him last start. Although he is more suited to a dry track, his class will take him a long way. Forgive 6. Leave Me Some’s first-up effort where she was checked/blocked at a critical stage and 9. Dubai Tycoon will be hitting the line hard.

Irish import 4. Hosier resumes for his new trainer Kris Less and has trialled well in a recent heat at Muswellbrook. The six-year-old gelding produced a career peak figure first-up last preparation and bolted in winning at Sandown Lakeside. Further, repeating that performance will make him hard to catch. In addition, he is a consistent type who has the ability with a strong record, maps to control the pace, and jockey Hugh Bowman rides for the first time.

Dangers: 8. Blesk is ready to win and looms as the main danger. The gelding was 35 days between runs last start at Rosehill and ran one of the fastest final 400m splits of the meeting in 23.22 whilst sprinting in the inferior ground. He will be fitter for that; the drying track is ideal and expect him to hit the line hard. 3. Fender was sharply back in distance last start at Grafton in the feature Ramornie Handicap (1200m) and was specked $9.5-$7.0.

The gelding got too far back in a slow tempo and had too much to do. Moreover, he ran into third and ran the fastest final 600m/400m sectionals of the meeting in 33.62/21.94. 5. Wairere Falls had the pace/bias against him last start in the South Grafton Cup (1610m) and ran on well. 1. Lightning Jack comes out of the same race, and although he had every chance, he is ticking over well. 6. The Ritz is in career-best form but does need to step to 1600m for the first time.

How to play it: Hosier WIN. Odds & Evens: EVENS.

3. Baiyka was a well-backed favourite first-up at Grafton and saluted after a perfect ride from Hugh Bowman. Although having every chance, she backed it up on the clock from an overall time perspective and ran one of the fastest final 400m splits of the day in 22.76. The five-year-old goes up in weight but returns to her home track and may get the track pattern to suit.

Dangers: 12. Crowned Empress raced wide last start in stronger grade and ran on well into fifth place. The mare has a solid record at this track and can rate to win. 10. Austeja resumes and has trialled well. She is a consistent type and maps well. Market watch 11. Tigertude who returns without an official trial and raced well last prep.

How to play it: Baiyka WIN. Odds & Evens: SPLIT.