The respect for his beaten rival in the CS Hayes Stakes duel is such that Alligator Blood’s trainer, David Vandyke, hopes if it isn’t his day in the Australian Guineas, it will be Catalyst who claims the group 1 classic for three-year-olds.

The pair of geldings are likely to see a lot more of each other in years to come, but the first big prize is on the line at Flemington on Saturday. Vandyke admits to worrying what the stirring eye-to-eye duel a fortnight ago took out of his horse. 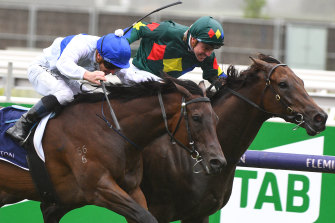 Alligator Blood, on the fence, fights off Catalyst in the CS Hayes Stakes.Credit:AAP

“I think the Hayes is the right form, but we will find out. Alabama Express won a group 1 [the Orr Stakes] last time against the older horses, so he has good form,” Vandyke said.

“If Alligator Blood doesn’t win, I want it to be Catalyst, because Clayton Chipperfield is great bloke and trainer with a very good horse, and if he wins it will stand up the Hayes form.

“You don’t know how much those duels can take out of your horse, and we will only know after the Guineas, but I’m happy with him and I would say cautiously confident.”

That was an epic contest and we might be in for another.

Alligator Blood has won nine of his 10 starts. His defeat came when Super Seth gunned him down in the final couple of strides of the Caulfield Guineas at the top level in the spring, and it leaves a lingering doubt for Vandyke as he steps up to the 1600m again.

“The mile is the only trip he has beaten at, and I have to say I’m not convinced he is a miler just yet,” he said.

“I’m sure he will run another big race and they will have run past him to beat him. Catalyst couldn’t do that last time but he gets a 1½ kilo turnaround for the Guineas, but he will need to be good to beat him.”

“My bloke is in as good a shape as he was leading into the CS Hayes. That was an epic contest and we might be in for another.

“This time is the one that counts, because it is the group 1s that are the races which are remembered. Alligator Blood hasn't won one yet, and it’s very important to get one."

Punters are expecting the weight swing to prove the difference at Flemington with Catalyst the $2.70 Beteasy favourite compared to $3.20 about Alligator Blood.