Carcassonne: Belgian Jasper Philipsen claimed his maiden victory on the Tour de France when he won a bunch sprint in the 15th stage as overall leader Jonas Vingegaard suffered a bad day on Sunday. 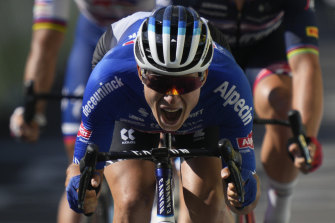 Vingegaard retained the yellow jersey but hit the deck and lost two of his Jumbo-Visma teammates as Steven Kruijswijk crashed out and Primoz Roglic did not take the start of the 202.5-kilometre stage from Rodez after failing to recover from injuries.

With temperatures above 40 degrees Celsius, organisers sprayed parts of the road with water to cool down the melting tar before the riders passed.

Nils Politt (Bora–Hansgrohe) and Mikkel Honore (Quick-Step Alpha Vinyl) built up an advantage of about 2:30 over the peloton.

The breakaway was reined in with 50 kilometres left, shortly after Vingegaard crashed along with teammate Tiesj Benoot. 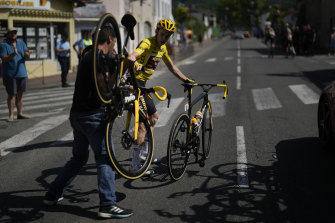 Yellow Jersey Jonas Vingegaard gets a new bike after crashing.Credit:AP

Vingegaard made it back into the peloton and still leads defending champion Tadej Pogacar (UAE Team Emirates) by 2:22.

Thomas, a track pursuit specialist, went solo in the finale but was caught 500 metres from the line, leaving the French riders still waiting for their first stage win in this edition.

Monday is a rest day on the Tour de France.