Not only does Cricket Australia chief executive Nick Hockley believe he can reach a deal with the West Australian government to play the fifth Ashes Test in Perth, he is also adamant that the partners and families of the players will be able to make the trip.

Having navigated his way through the myriad concerns and requests of the England players and staff – including the provision of a Yarra Valley resort for partners and families to quarantine ahead of the Christmas/New Year period in December – Hockley’s next major task is to find a way to keep the final Test of the series at Optus Stadium. 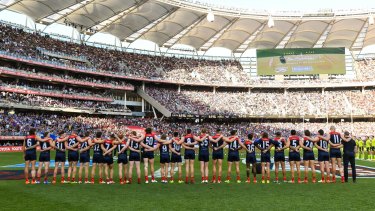 Negotiations are underway to try to ensure the fifth Ashes Test remains in Perth in January. Credit:AFL Photos

Such an outcome would require some delicate balancing between the extremely strict COVID-19 restrictions enforced by the West Australian government, and also the commitment CA and the ECB have made to their players that they will not be subjected to hard biosecurity bubbles during the Ashes series.

“Cricket is a non-contact sport, we’ve shown through last season that our cricketers are very responsible in terms of complying with all the biosecurity protocols,” Hockley told The Age and The Sydney Morning Herald. 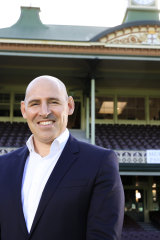 “There’s a lot of experience now of being able to play elite level sport at Perth Stadium while being in a biosecure environment, and that’s the detailed discussion that is going on at the moment with the WA government.

“It’d be the first Ashes Test at the new stadium, it’s a magnificent stadium, we know Perth will turn out in really big numbers. So we’re working very actively and constructively on being able to play in Perth in a way that provides a fantastic experience for both sets of players, but also keeps the WA community safe.”

“Our commitment is, one, that we complete the tour safely but also, two, it’s a fantastic experience for both squads, so there’s no suggestion [families wouldn’t join the teams in Perth],” Hockley said. “We are actively engaged in really positive discussions with the West Australian government and West Australian Cricket as we speak.

“We’ve got great previous experience of having played in WA in quarantine conditions through the BBL last year – we played five matches in January last year at Perth Stadium – and since then the AFL’s had lots more experience of hosting sport in a way that keeps the community safe, but also gives the players, match officials, and broadcast operatives a great experience.”

Hockley revealed that it took the additional insights of a top bureaucrat from the Queensland government to ensure Joe Root and England’s players were satisfied by arrangements in the second of two video conference meetings last week, the forerunner to England’s squad announcement on Sunday night.

“What we’ve done all the way through is brought in all the relevant experts, whether it’s medical experts or others,” Hockley said. “So we had support from one of the senior bureaucrats who’s been supporting us with the inbound quarantine arrangements, so state government.

“We also have to understand it’s a different perspective – England have throughout the course of their summer certain arrangements, England’s been open much more, whereas they hear of lockdowns and those kinds of things here.”

As he has maintained throughout the winter months, Hockley believes that rapidly rising vaccination rates will effectively set down a carpet of COVID safety for the Ashes series and other matches to be played during the season. Scenes reminiscent of this year’s Test series between England and India, played in front of full crowds, remain the goal.

“I was particularly encouraged to hear over the weekend there is going to be a crowd of 10,000 at the Melbourne Cup in the first week in November,” Hockley said. “If you think that Boxing Day isn’t until the 26th of December and you look around the world, whether it’s the England series against India with full crowds, or the US Open or Wimbledon, I’m really optimistic.

”Every single one of our internationally contracted players, women and men, are fully vaccinated, 98 per cent of our domestic players have had their first jab, we’re well on the way to being fully vaccinated. The majority of the CA staff are in Melbourne, they’ve all been working exceptionally hard from home, and we saw from the India series just now, what it means to have cricket back.“