During the tea/lunch/dinner/whatever the hell it is break into which England had sailed without losing a wicket, Cameron Green worked through his bowling with the assistant coach Andrew McDonald in front of the Adelaide Oval members stand.

He had bowled a couple of exploratory overs before the players exited the field at a cost of 11 runs, still looking a fraction short of top pace, and searching for rhythm on a day when Australia, minus Pat Cummins and Josh Hazlewood, needed him to provide an impact.

After one delivery veered down the leg side, beating McDonald’s baseball mitt, Green apologised. The previous week, in Brisbane, Green also apologised to his captain, Cummins, in case he had over-celebrated his first Test wicket at the Gabba.

But if there was ever a passage of play that summed up how it is possible to be both a hostile cricketer and a polite human being at the same time, it arrived in the way Green returned to the bowling crease to first work over, and then account for, England’s captain Joe Root.

Noticeably going up a gear in pace – he was to average around 141 km/h for the spell, with a top mark of 145.4 – Green extracted bounce and just enough sideways movement to worry Root while keeping him scoreless. 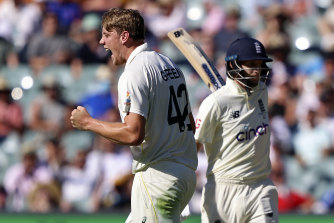 Cameron Green first worked over, and then accounted for, England’s captain Joe Root.Credit:AP

At the other end, Nathan Lyon was twirling through his best spell of the series so far, putting enormous torque on the ball and seeing it spit and spin off the grass prepared by his former colleague Damian Hough.

Together, Lyon and Green cornered Root and Dawid Malan so effectively that the established nature of the partnership, and Root’s sublime 2021, scarcely appeared to matter. In the moment, these two harried visitors were made unwelcome not by any verbal diarrhoea, but instead by bowling of the highest standard. 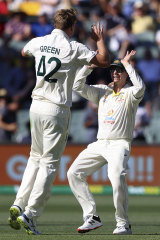 Twice, Root was discomforted by Green deliveries that fizzed off the pitch, hitting the splice then beating the bat. When Green offered something fuller, Root drove uncertainly and sliced to point. Next ball, shorter again and moving away, Root could only spar to slip, where Steve Smith looked no more likely to drop the catch than he had been to get out cheaply during the entire 2019 series.

Australia’s reaction, in the midst of a spell building tremendous pressure, was exultant. Root, defeated when well set on an amiable surface by Green for the second innings in a row, punched his bat with reflexive disgust. He is, somehow, still to make a Test hundred in Australia, never going further than 87 in Adelaide back in 2013.

To have twice found a way past England and the world’s best performing batter of recent times, when Root was well set and ensconced in a partnership, was the sort of achievement upon which substantial international careers can be built.

It would be no overestimation to say that Green’s stint was of a standard that Cummins himself would have been proud. Not simply for the focused quality of the bowling, but for the fact it was achieved with composure and presence that did not require sledging for effect.

Green’s batting has so far been corralled by England, twice having his off stump flicked and seemingly grasping to return the balance and timing of his pre-delivery movements to their level of sync from last summer. But he is enjoying the chance to bowl far closer to full tilt at safe distance from back injuries, like a sports car no longer tethered by a speed limit.

Unsatisfied with Root’s wicket alone, Green pushed on, if anything giving still less room to Ben Stokes. He rounded out his spell (5-3-6-1 after the resumption) with three consecutive maidens, half of six in a row shared with the equally demanding Lyon. Together, they ratcheted up the sense of English claustrophobia to the point that Malan surrendered to Mitchell Starc in his first over back.

Lyon was eventually rewarded when Ollie Pope was given out twice in three balls, reprieved in the first instance by DRS, but not in the second by a heedless flick into short leg’s lap. Starc’s follow-up to Green was little less disciplined, soon reaping another edge from Jos Buttler.

By the time Adelaide’s lights started to take effect, it looked very much as though this was simply another consistent chapter in what has so far been a pretty one-note Ashes pageant for Australia.

But that would be to underestimate the impact of Green, who within a couple of Test matches has gone a long way towards proving himself the seam bowling allrounder of a selection panel’s dreams. The runs, you suspect, will come.