Nicochet has a golden chance to end a 883-day drought in a modest BM 64 race at Thursday’s feature Hawkesbury meeting.

Ironically, it was a stronger-graded Benchmark 70 at Warwick Farm in late July 2019 when he charged home to win under 60.5kg with Tommy Berry in the saddle. 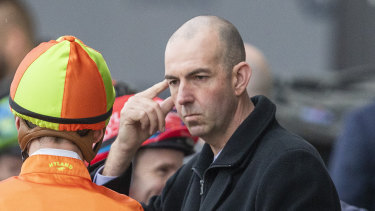 To say it’s been an endless run of frustration since is a whopping understatement but the eight-year-old gelding, trained by Jason Coyle, now gets his best chance to snap one of metropolitan and provincial racing’s longest droughts.

You can’t say this son of Nicconi doesn’t know where the post is. While he’s only saluted four times from 55 starts, he’s rattled up a further 19 placings, several without luck.

Nicochet lines up for his fourth straight race at Hawkesbury deep into the current prep, having chased hard – twice into the placings – behind some very handy winners.

He gets back on dry ground where most of his best performances have come, and Regan Bayliss regains the ride after missing by a nose in a similar race at Kembla three months ago.

Mind you, there’s a couple of rivals also desperate to retaste success on timely class drops.

Honest provincial seven-year-old Safado, a one-time Provincial Championship Qualifying winner, hasn’t won since a BM 85 at Eagle Farm in early autumn, and before that you have to go back to the summer of 2019.

And six-year-old Catapult has been out of the winner’s circle since back at the start of 2021 when he ironically put two wins together in tougher grades.

Meanwhile, two other runners on the card are both set to bounce back from rotten luck stories last start in the city.

Underrated Randwick mare Al Sahara was found to have a very poor recovery rate after dropping out in a BM 64 at Warwick Farm just over two weeks ago.

That came after an impressive maiden win in the country, and he looks well-placed to hit back in a Class 1 & Maiden Plate (1800m) fifth-up.

Likewise, three-year-old provincial filly Sweet Ruby can put a nightmare last start on the Kensington track behind her in a BM 64 over 1400m.

Having crossed over into a nice trailing position in a deeper BM 72 only 12 days ago, Sweet Ruby copped a severe check losing valuable ground just before the turn before failing to run on.