The TAB’s crash on one of the biggest racing and wagering days of the year delivered an unwanted hit to turnover during Melbourne Cup week – but not enough to stop domestic wagering on the 2020 Flemington carnival growing by six per cent to $667.3 million thanks to a record sum wagered on the Cup itself.

New VRC chief executive, Steve Rosich said the figures showed the continued importance of Cup week when a record $365 million was wagered on the Cup day meeting at Flemington – up 17 per cent on the previous year. Turnover also grew on Derby day by 11 per cent year-on-year to $141 million. 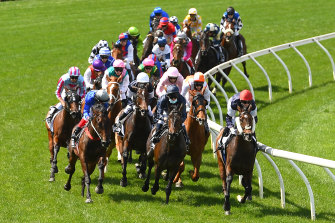 Punters placed bets on the 2020 Melbourne Cup from afar.Credit:Quinn Rooney

"In a year like no other, the record growth in wagering turnover for the Melbourne Cup confirms its status as the race that stops a nation, while strong engagement from members and fans across the four days of the Melbourne Cup carnival emphasises its place in the heart of Australians," said Rosich.

As a result of the TAB crash, turnover dropped from $104 million in 2019 to $80 million on the Stakes day meeting last Saturday – a decline of 23 per cent year-on-year.

The headline-grabbing number is the record $221.6 million wagered across Australia on the 2020 Cup race itself – up 17.3 per cent on 2019, with corporate bookmaker turnover growing by more than 50 per cent, Racing Victoria said in a statement released on Friday.

Oaks day was the sixth highest meeting of the 2020-21 season, with a total turnover of $82 million despite a decline of six per cent year-on-year.

RV said there were three factors for the Oaks day drop – smaller fields than the 2019 meeting, high bookmaker margins on the opening two days of the carnival, which deterred punters, and the absence of crowds.

Racing Victoria CEO Giles Thompson said the financial performance during Victorian racing's most important week is crucial to the financial health and viability of the sport, as wagering is the primary funding source for racing.

"Engagement with Victorian racing has been at record levels throughout the COVID-19 pandemic with many people gravitating to our sport via digital platforms and multiple broadcast options when other entertainment options were limited," Thompson said.

"Due to the absence of crowds, the continuance of some social restrictions and the fact that many Victorians were out and about enjoying our first 30 degree day of spring, digital accounted for 78 per cent of wagering on Melbourne Cup day, up from 66 per cent in 2019.

"We were incredibly disappointed with the TAB outage on Stakes day and we have seen that reflected in the results with a 23 per cent decline in turnover on the meeting. The estimated impact of that incident on the thoroughbred industry’s bottom line will be in excess of $2 million.

"The results on Oaks day align with what we saw at the Caulfield Cup carnival where there was significant wagering growth on the two Saturdays, but the midweek meeting saw no growth in the absence of crowds and associated hospitality events on what was also a workday."