An ability to rate horses brilliantly from the front was the major reason jockey Linda Meech was chosen by father and son training partners John and Chris Meagher for the Oakleigh Plate ride on the well-fancied, lightly raced mare Pippie.

And it proved an inspired selection as she produced an exceptional display to get her mount out of her wide barrier the second the gates opened and into a lead from which she was never headed. 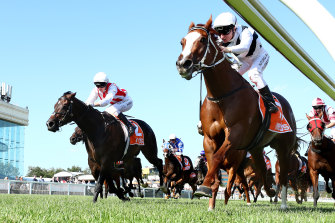 The win gave the father and son duo their first group 1 in partnership, and gave Meech her second at the highest level.

"I can't tell you how much it means to me. I have been starving myself for the last month. There's been a lot of long runs and walking and not a lot of food," she said after her triumph.

"She was a great ride and I only did the fun part."

Unlike many Oakleigh Plate winners, Pippie – whose time of 1.01.93 seconds for the 1100-metre dash bettered Miss Kournikova's race record – will not line up in the 1200-metre Newmarket Handicap for her next start.

"We didn't accept with her so something like the William Reid (1200 metres at Moonee Valley) is an option," said Chris Meagher, whose father is no stranger to group 1 success, having sent out a Melbourne Cup winner amongst other high-profile gallopers. 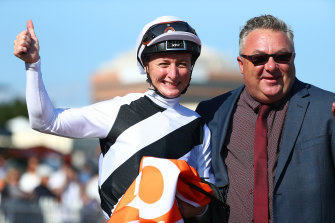 Meech with trainer Chris Meagher after the race.Credit:Getty Images

"We are happy to space her as long as we can because she proved today, three from three first-up starts, that she's extra special fresh.

"She's just pure speed, this mare. I said last time in she went out a little girl, she's come back a grown up woman. I said to Linda, handlebars down as soon as the gates open.

"Benny Melham [who won the group 1 Futurity earlier in the day] has done a lot of work on her and ridden her most of her prep, and we sat down with the owners and said 'who do we get who can ride 52 and is a great front-running rider?'

'We went through three or four, but Linda came out on top. She is an exceptional front-running rider and it worked out perfectly."

The Meaghers, senior and junior, were delighted to have pulled off such a high-profile success together.

"He's been there, done that. Anything that I can get off him is a bonus," said Chris of his father.