It still has the glamour and talent but, as is the case with many sports in this COVID-19-ridden year, the glitz won't quite be the same when the 13th edition of the Indian Premier League opens on Saturday night.

Cricket's most lucrative Twenty20 tournament returns but not in its typical place, having been put on hold in March and now shifted from India because of its spiralling coronavirus cases to the sprawling sands of the United Arab Emirates, with matches spread across the cities of Dubai, Sharjah and Abu Dhabi. 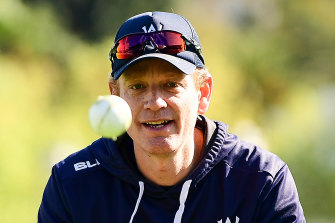 Former Victoria coach Andrew McDonald will take charge of the Royals in the IPL.Credit:Getty Images

The Royals finished second from the bottom last year, and McDonald has been given a three-year contract to work some magic. In the likes of skipper Steve Smith, still recovering from concussion in England, and Englishmen Jos Buttler, Jofra Archer and Ben Stokes, he has immense talent.

McDonald may have a formidable coaching record in English county cricket, with Victoria, the Melbourne Renegades and now as Justin Langer's senior assistant with the Australian team but the IPL can be a cantankerous beast, bankrolled by the billionaire private investors who aren't afraid to make rapid change.

"It's a great challenge, more so in this environment because there moving parts now with COVID. It creates that extra layer of management … it's going to be a tough one to navigate through," McDonald said, adding that keeping tabs on the mental health of players will be as important as ever.

The sights and sounds of the IPL help make the IPL such a spectacle, even when watching from the couch, so the lack of atmosphere because of empty venues will be a challenge for all. McDonald said it was up to players and staff to adjust to the "new norm", one which will occur without the fabled IPL parties.

"We are really fortunate we have got this opportunity to do what we are doing in this climate. It's definitely going to be different. The easy thing is to reflect on what it used to be like. Well, it's not going to be like that, so it's getting our heads around the positives to what this tournament will look like," he said.

"The big benefit is less travel. Usually in an IPL season, there is all the hopping on planes and long travel days. The shorter trips and no airports and stuff like that is definitely going to be a positive. We feel for the fans who aren't able to attend the games but this is the new norm that we face."

The 18 Australians on show are all keen to make a point. Smith and David Warner (Sunrisers Hyderabad) are respective captains of their franchises and carry a $2.5 million tag.

Glenn Maxwell and Nathan Coulter-Nile are also in the money while Adam Zampa, overlooked in the auction but taken as a recent replacement for fellow Australian Kane Richardson, has even more reason for being excited about joining Royal Challengers Bangalore because he will have a first-hand view of how Virat Kohli and AB de Villiers train and play.

Australians in the IPL