Teenage leg-spinner Rehan Ahmed could become England’s youngest Test player after he was added to the squad for next month’s series in Pakistan.

Wednesday’s call-up caps a remarkable year for the Leicestershire player. At the start of 2022, he starred in the Under 19 World Cup in the Caribbean, where England lost in the final to India. Ahmed then took 19 wickets in the T20 Blast and made his debut in the Hundred for Southern Brave. 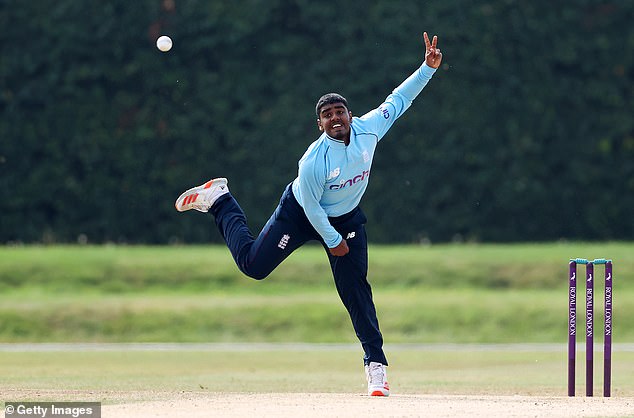 He finished the domestic season with a maiden first-class hundred and his first five-wicket haul against Derbyshire.

His England Lions debut in the summer was followed by a call-up for the ongoing red-ball camp in the UAE and, despite plans for Ahmed to travel to Pakistan as a net bowler, he has now been added to the Test squad, whose only other frontline spinner is Jack Leach.

England coach Brendon McCullum said: ‘We know he’s not the finished article and has raw potential, but Ben Stokes, myself and the rest of the coaches like how he approaches his game. The experience of being part of the squad in Pakistan will be hugely beneficial to him.’

Ahmed was not born when Jimmy Anderson made his England debut, but he is now part of a squad alongside the 40-year-old seamer.

He was told of his call-up at tea on day one of England’s warm-up match against the Lions in Abu Dhabi, where Jofra Archer bowled for the first time in England whites since March 2021.