Champion jockey Jamie Kah has been handed an extra two-month ban for misleading stewards over a Mornington Airbnb party last month, with the sentence to be served on top of her existing three-month ban for breaching COVID-19 protocols.

The added suspension means that the 25-year-old, who is the highest-profile rider in Victoria and one of the best known in the country, will not be able to ride in races until the end of January 2022. 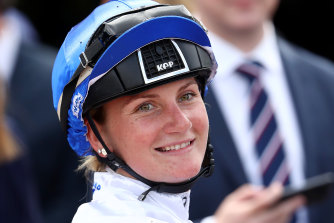 The suspension will almost certainly cost her hundreds of thousands of dollars in lost earnings from winning percentages and riding fees.

She has already missed the group 1-winning rides on Behemoth and Incentivise in the Memsie Stakes and Makybe Diva Stakes and would have had a strong Melbourne spring racing carnival.

Kah had pleaded not guilty to the charge of providing false and misleading evidence to stewards relating to the answer she gave when asked who was present at the illegal Mornington gathering, but the Victorian Racing Tribunal dismissed her excuses.

The tribunal cited earlier cases of riders – Ben Melham, Ben Thompson and Mitch Aitken – who had been suspended on the same charge in recent times – when they received similar bans as well.

The cases of Melham and Thompson did not involve COVID-19, he pointed out, and while Aitken’s case had been against a background of the COVID-19 protocols, he had personal and particular circumstances and problems in his background for which he has been receiving professional assistance.

“None such has been put before us in your case. Mr Aitken, Mr Melham and Mr Thompson pleaded guilty,” Judge Bowman said.

“The bottom line is that we are of the opinion that a two-month suspension should be imposed … it is cumulative in its entirety on the period of three months suspension [imposed for the COVID-19 breach].

“Thus the total period of suspension for both is five months.”