Indian cricket supremo Sourav Ganguly has declared that his superstar side will agree to Australian quarantine arrangements and save Cricket Australia's $300 million summer.

While CA has been given NSW government approval for the tourists to quarantine for a fortnight in Sydney next month, the Board of Control for Cricket in India has yet to rubber-stamp the bio-security measures the host nation has devised.

Speaking from his home city of Kolkata on Monday night, where he affectionately remains "The Prince", Ganguly told The Age and Sydney Morning Herald that there was no reason to suggest the tour was in doubt despite CA having yet to release the fixture for the white-ball and Test series. 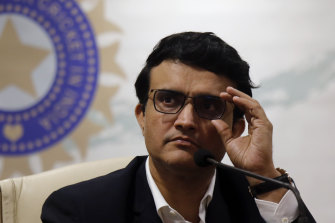 "So far it is ahead. The initial part will be in Sydney. We are still in discussions how to get the bio part and medical parts stronger because it's a long tour but I am told Australia is COVID free at the moment, there aren't many cases. Basically, we are trying to get everything in place and make sure it is safe. That's all," he said.

The majority of India's players, including skipper Virat Kohli, have been living in a hub for almost 12 weeks as they prepared for, and continue to take part in, the Indian Premier League in the United Arab Emirates. Many are without their families, ensuring there is greater importance on the need for approval to be given for their families to travel to Australia.

"We have requested that because they have been in the IPL for a long time and then they go straight from the IPL to Australia because there is a 14-day quarantine. It will be solved," he said.

"They [players] have already been living in a bubble for the last 80 days."

Asked if the tour would be in doubt if families were rejected, Ganguly replied: "I don't see a reason why the families won't be allowed to come. The Australian cricket board is trying to accommodate the families. It should be okay."

This series will be a battle for supremacy, for the Australians are No.1 ranked but are only two points ahead of third-placed India, who had a breakthrough series win on Australian shores two years ago when David Warner and Steve Smith were suspended.

The first Test under lights in Adelaide is set to begin on December 17, with Melbourne, Sydney and Brisbane to follow in a series that will extend into mid-January. This could potentially have ramifications for the tourists, for Kohli and wife Anushka Sharma are expecting their first child in January and the superstar batsman could return home for the birth.

Ganguly, also a former Indian captain, did not wish to speculate on what Kohli would do.

"This is a personal question. I don't like to comment and I have not asked him," he said. 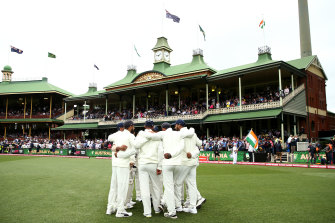 The NSW government has approved Cricket Australia’s proposal for India to quarantine in Sydney.Credit:Getty Images

CA had originally planned to have the white-ball series of three Twenty20 internationals and three one-day internationals held after the four-Test series. But the BCCI asked for this to be flipped, delaying the final release of the schedule which was further delayed when Queensland Health failed to allow the tourists to quarantine in Brisbane.

As the Indian selectors prepared to pick an expanded touring squad on Monday night, Ganguly said the BCCI had sought the change so his team had time to prepare for a home series against England.

"It's just about the timing to get everything accommodated. There is the Boxing Day Test, the New Year's Day Test, all these remain on schedule. Then India come back and play against England straightaway for the Test series and one-day series," he said.

"The T20s were supposed to be before the [T20] World Cup but that has not gone through because of the COVID. We are trying to get the best possible schedule and finish the one-dayers and T20s so the players can get back."

Ganguly said he still hoped his "Super Series" plan for an annual one-day series tournament between India, Australia and England would go ahead once COVID-19 issues were resolved.

"It hasn't gone anywhere because of COVID. We don't know what is going to happen in the next six, seven months. A lot of tournaments and series have been cancelled so that needs to be rescheduled," he said.