India held their nerve in the final over to win the final one-day international against England by seven runs and clinch the series 2-1.

Sam Curran, batting at No.8, hit an unbeaten 95 off 83 balls which threatened to snatch a dramatic victory for England in Pune on Monday (AEDT). 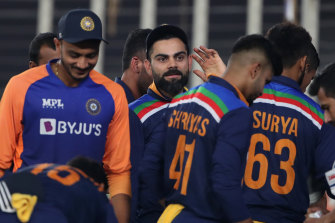 India have completed a hat-trick of series victories over England in the three forms of the game.Credit:Getty

Shardul Thakur claimed 4-67 but it was two early wickets from Bhuvneshwar Kumar (3-42) that put India ahead before Curran’s brilliant fightback.

“We didn’t win the game, but happy with the way I played,” Curran said after being named man of the match. “I haven’t done something like that for a while, especially for England. Fair play to Natarajan, he had six deliveries there and showed why he’s a good bowler.”

England won the toss for the third time in the series and Mark Wood’s 3-34 helped avert an even larger score for India. Rishabh Pant (78), Shikhar Dhawan (67) and Hardik Pandya (64) all scored half-centuries but India lost their way in the latter half of the innings. 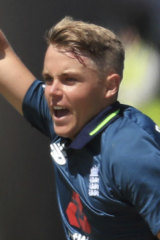 Sam Curran’s heroics weren’t enough to get England over the line.Credit:PA

“England will not throw in the towel at any stage, Sam played well, but we kept taking wickets to put enough pressure on them,” India captain Virat Kohli said. “The mindset shifted in the last couple of overs [but] Hardik [Pandya] and Nattu were brilliant to finish it off.”

Wood took all his wickets in his last seven deliveries as India folded quickly, losing four wickets for eight runs.

The hosts appeared well set to go beyond the 350-run mark when Pandya and Pant were together. They helped India recover from a middle-order collapse with a 99-run fifth-wicket stand off 70 balls.

Dhawan and Rohit Sharma (37) had provided India with a whirlwind opening stand of 103 runs but spinners Adil Rashid (2-81), Liam Livingstone (1-20) and Moeen Ali (1-39) grabbed four wickets between them to reduce India to 157-4 before Pandya and Pant revived the innings.

Pant and Pandya both hit four sixes each and five boundaries apiece before England struck through their seamers.

Stand-in captain Jos Buttler plucked a brilliant left-handed catch off Pant behind the wicket off Curran’s full-pitched delivery and Pandya had shuffled too far across allowing Ben Stokes to clean bowl him round the legs.

Thakur (30) and Krunal Pandya (25) did damage before Wood returned and ended India’s hopes of crossing the 350-run mark with three quick wickets. Reece Topley ensured all seven England bowlers were among the wickets when he picked up the last one of Bhuvneshwar Kumar.

Curran, who hit nine fours and three sixes, kept England in the hunt by farming the strike with Wood after England looked all but out of the game at 257-8 in the 40th over.

Curran nearly turned the tables with a 60-run ninth-wicket stand with Wood (14) before Wood was run out off the first ball in the last over.

India had their chances but dropped four catches as Curran was twice let off the hook on 22 and 87 before Natarajan was left with enough runs in the bag in the 50th over to complete India’s treble at home against England.

“Unbelievable innings from Sam Curran,” Buttler said. “We’re disappointed, we came here and we wanted to win, but there have been great learnings throughout the process.”

India also won the Test series 3-1 to qualify for the World Test Championship final and prevailed 3-2 in the Twenty20 series.