It happened at 4:49pm. An eruption of noise unlike any other we have heard in this series. A usually raucous Kia Oval crowd had been frustrated for the previous 64 overs, tamed into their a murmur by a masterful showing from India’s top three. Then, with the first six deliveries of the second new ball, they were shaken out of their own conversations, pumped full of adrenaline and pointed towards the middle, where they remained transfixed to the close.

They weren’t particularly good balls. The first short and only just making it to waist level. The last – the best – straight and fuller, but not enough to trouble the stumps. But when Rohit Sharma got under the latter to find Chris Woakes at deep square leg, and a review showed Cheteshwar Pujara had inside edged onto his hip for a catch to Moeen Ali in the slip cordon, Ollie Robinson had two wickets. And England, out of nowhere, had been handed a lifeline.

Up until then, India had turned an overnight deficit of 56 to a lead of 137, for the loss of just KL Rahul for 46. Sharma had strutted calmly to an eighth Test hundred and, with 127 by his name, threatened to break into a gallop. Pujara, on 61, prepared to continue offering company, as he had done during the previous 153 runs of their partnership. And just like that, as England swayed wearily in the Saturday afternoon dank, two key breakthroughs brought two new men and a welcome sense that this match is still within their grasp.

There would only be another 11 overs with the hard, new ball and no further inroads despite greater willing than at any point during day three. More pertinently for Virat Kohli, who will beginning on 22 tomorrow alongside Ravi Jadeja (nine), an extra 33 runs were found before stumps were drawn early to leave India boasting a 171-run lead on 270 for three.

They’ll tell you “that’s Test cricket”: when the team doing most of the running get run-up on. And to be fair, they are right. But there would have been nothing to flip, even momentarily, had the day not even bossed by the man who needed Test cricket the least.

That is the underlying glory to Sharma. By the start of October 2019, when he was handed this latest recall, he was already a superstar: name in lights for his exploits with the white ball that were so profound, so vast that even the red ball sneering could not prick his bubble. He had 218 ODIs to his name, and had come off an English summer where he became the first batter to peel off five centuries in a single World Cup. Then there were the three 50-over double centuries and the four international T20 hundreds. No one else has as many of either. And while Test cricket commands heritage respect, did he actually need the hassle of dipping back into it? Meryl Streep’s probably not sat around her Hollywood pad wondering if she should do more theatre.

Well it turns out, he does and, more over, he’s pretty damn good at it. Twin hundreds against South Africa in that first Test back and then a 212 later in that same series allowed him to indulge the run lust. Earlier this year, there was a 161 against England in Chennai that went just under a strike rate of 70.

But being white ball made meant the challenges of seam and swing – both the ability and desire to deal with it – have been doubted immensely. The nerve and patience required at odds with the cheeky snarl and paunch that suggests he was a man built for comfort and all about style. And yet here he is, four Tests in and one to go, averaging 52.57 this series with 368 runs an opener, in a country where few outsiders – and insiders for that matter – do both.

It was fitting that he brought up three figures with a skipping six down the ground and into the Micky Stewart Pavilion. It was one of the few times he took the silencers off, no need to suppress his urges as he had done so expertly for the previous 203 deliveries. All told, he left 13 per cent of what was sent down to him – the highest rate in any previous innings – during what was his slowest hundred to date. It was also his first in a Test outside of India and has now taken him past 3,000 career runs.

You would be stretching the truth to say it was chanceless, even if it was clean given how gracefully he struck down the ground, as he did to the last ball of James Anderson’s opening over for the first four of the 107 runs he would score on Saturday. Rory Burns failed to react to an edge that scuttled by shin height when Sharma had six, and Burns was similarly at fault when Sharma was on 31. This, also off Anderson, was tougher, with a right-hand stung after a sharp dive.

Rohit Sharma of India walks off after losing his wicket

There was a touch of contention for the dismissal of Rahul, felled after an opening stand of 83 that looked more than capable of wiping out England’s first innings lead of 99. Anderson’s lift and movement looked to have snared an edge, though not according to the umpire. A DRS review was called and UltraEdge confirmed a noise past the bat. Rahul’s issue was that he felt he had hit his pad. Which he had done. It’s just that he also hit the ball.

He left the middle reluctantly after exchanging a few words to the umpire who before the replays had called it his way. Nevertheless, what boost for Joe Root’s side was nullified by Pujara’s insistence on not letting England’s quicks get away with anything short or full.

The century stand with Sharma came in 28.4 overs, and the frustration led to the hosts instigating their usual short-ball tricks at the beginning of the evening session. A tactic that rarely seems to work and always speaks of the frustration bubbling lose to the surface. Without any great pace, Craig Overton was asked to do the role, with three men on the hook and another three inside the ring on the leg side. Pujara did not flinch, stepping away just once to guide a ball through third man to bring up a 31st half-century with his eighth boundary, from 103 deliveries. 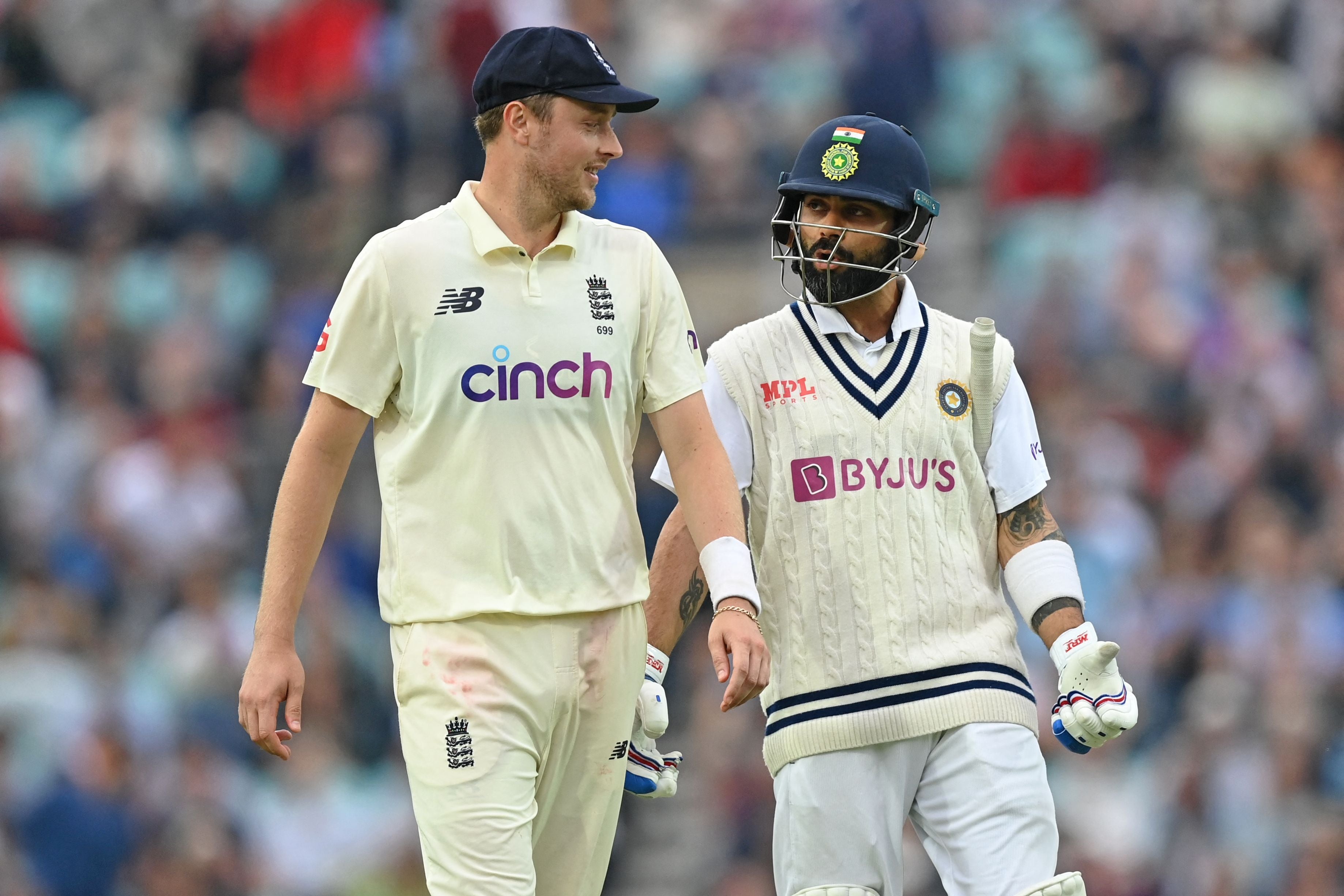 The most peculiar aspect was that, actually, England did not bowl all that badly, especially Chris Woakes, who is wicketless in 19 overs of this second innings after four for 55 in the first. Conditions looked grand for bowling, yet very little beat the bat or challenged through the air.

Perhaps the flatness of the pitch has been exaggerated by the classiness of the batting. But after 13 wickets on day one and seven on day two, the three on day three at least gives the hosts a sniff of saving this game at the very least, whether they end up bowling India out or not. The issue, however, will be how much these 76 overs of chasing leather has taken out of them.