Come back Test cricket, this white-ball business is desperately disappointing in comparison.

Certainly, the first one-day international here was a throwback to the bad old days when England were playing a different, more old-fashioned limited-overs game to the rest of the world.

First England were caught by surprise, in the words of new coach Matthew Mott, by the ‘ferocity’ of India and batted with too much timidity in a Twenty20 series won 2-1 by the visiting side. 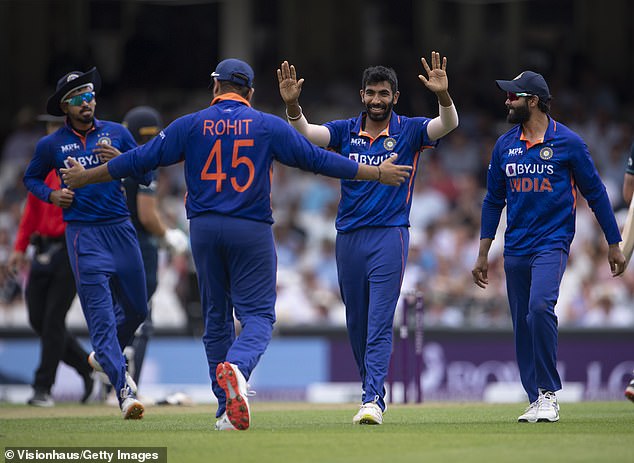 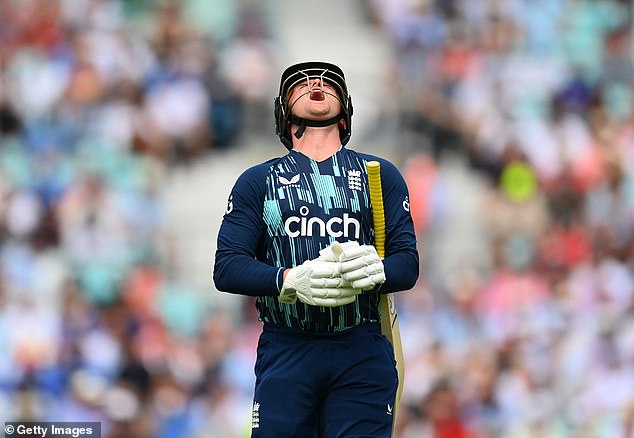 Now they were blown away by India in the first of three 50-over games, collapsing to 26 for five and then 110 all out in just 25.2 overs in the face of a world-class display of seam and swing bowling from Jasprit Bumrah.

It was never going to be anywhere near enough, India utterly outclassing England by romping home without loss in just 18.4 overs, captain Rohit Sharma dominating the reply with an unbeaten 76. Advantage, emphatically, to India with two games to play.

It is as if England’s world has been turned upside down. Just as the Test team have been re-invented as a dynamic force now the all-conquering white-ball side are struggling in the aftermath of the retirement of the man who transformed them in Eoin Morgan.

In fairness, they were exposed here after Jos Buttler lost an important toss on an unusually green Oval pitch full not only of lavish movement but also plenty of bounce and ill-suited to provide a run-laden one-day contest for a capacity crowd. 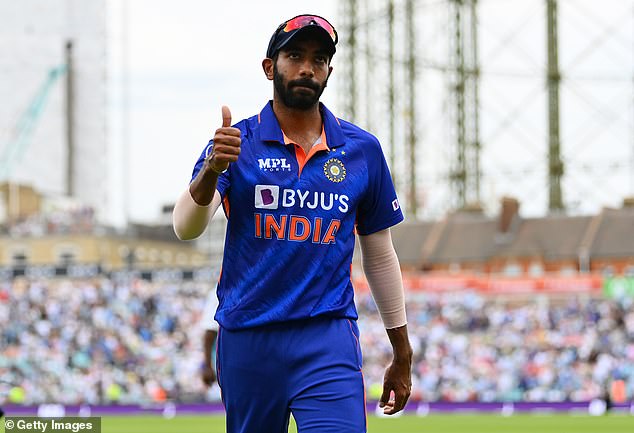 That should take nothing away from the performance of Bumrah who was near unplayable in taking two wickets in his first over, had figures of four for six by the end of his fourth and ended up with the magnificent tally of six for 19.

England simply had no answer. They had hoped the return of the big three from their Test revival in Jonny Bairstow, Joe Root and Ben Stokes would provide a welcome boost but all had been dismissed, along with Jason Roy, by the middle of the sixth over.

It was as if the switch from white clothing and a red ball to blue colours and a white one had stripped them of their super powers, Bazball replaced by a Mottley crew.

Root, sublime in the Test victories over New Zealand and India, was out to his second ball and Stokes to his first, a beauty from Mohammed Shami that almost cut the Test captain in two while taking an inside edge that was superbly caught by Rishabh Pant. 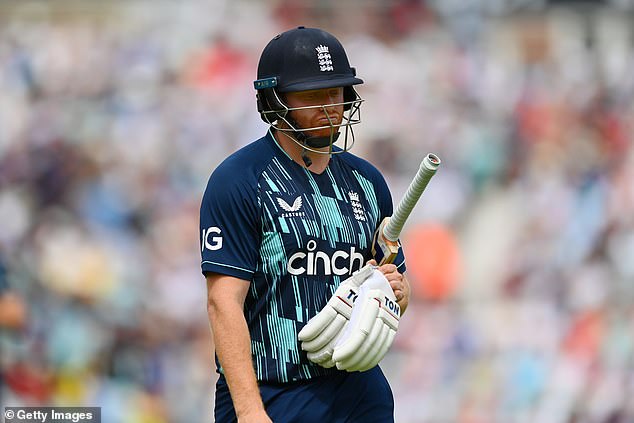 At that stage three wickets had fallen in seven balls, Roy dragging on a rare wide one from Bumrah to begin the slide, and when Bairstow fell to another good grab from Pant, and Liam Livingstone was bowled by a big in-swinger from Bumrah England were five down in the power-play. Game, effectively, over.

While all were crumbling around him Buttler stood firm, hitting his first two balls to the boundary and trying to hold together his side while wondering how he could re-discover the golden touch that was a constant companion of his predecessor.

Meanwhile Mott, the Australian who probably felt he had been handed the cushiest gig in world cricket when asked to coach England’s white-ball sides, sat on the Oval balcony busily scribbling down notes and perhaps pining for his old job with Australia women.

Any hopes of an England recovery went when Moeen Ali offered Prasidh Khrishna a return catch and Buttler was caught on the boundary, David Willey and Brydon Carse at least lifting them above their all-time one-day low of 86 all out against Australia at Old Trafford 21 years ago. 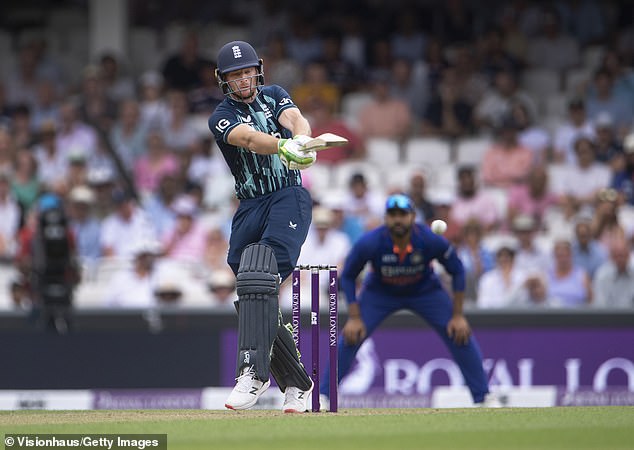 England could at least have had a wicket from the very first ball of the Indian reply, Shikhar Dhawan calling Sharma for a suicidal single off Willey to short mid-wicket.

But it summed up their fortunes that Bairstow missed the stumps with his under-arm throw from close range with Dhawan so short of his ground the England fielder could have run in and taken the bails off.

Dhawan could also have been run out backing up by Willey but that was as close as England came to making a breakthrough as Sharma eased into his task for an India side without Virat Kohli, apparently with a mild groin strain.

England made it far easier than it should have been for the India captain by feeding his strength – time and again they pitched it short and time and again Sharma hit them out of the ground, smashing five sixes in all, the first hurting a young spectator. 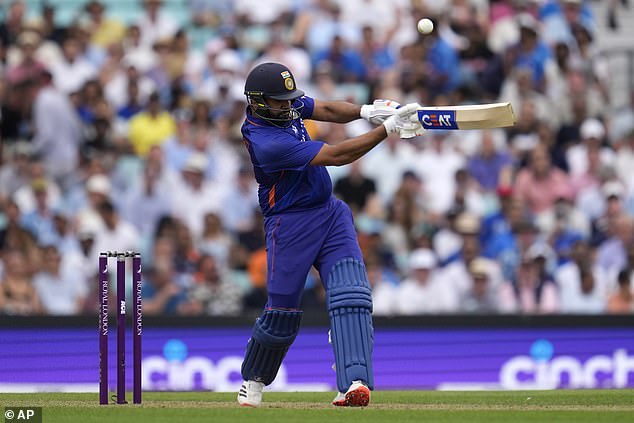 Rohit Sharma led the way for India with the bat, moving 76 not out with five sixes in total

Reece Topley, so impressive in the T20 series, could not get his radar working here while Craig Overton was not fast enough to trouble Sharma with the short ball. Carse had extra pace but disappeared for 38 runs in 3.4 overs and conceded three of the sixes.

England’s plight was summed up by the sight of Stokes, who was originally scheduled to miss the whole summer of white-ball cricket, hobbling as he delivered his one over before retiring to the outfield.

A sobering day for England, then, and a disappointing one even for the large contingent of Indian fans at the Oval who must have hoped for a better spectacle than this.

It is too early to panic about England’s white-ball cricket just yet but Buttler could do with one of the commanding performances so common under Morgan – starting in the second game at Lord’s on Thursday.