Fresh from winning the $200,000 feature Wyong Classic with Soaring Ambition, jockey Tommy Berry will look to keep the two-year-old winners coming at Randwick on Saturday.

Berry will steer Ciaron Maher’s Melbourne visitor Jamarra in the opening race, and while he has not been on the colt’s back, he has already received plenty of positive reports from the stable. 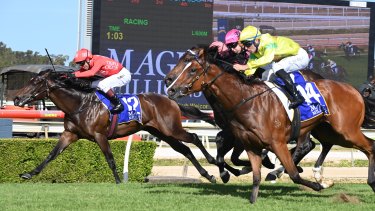 Tommy Berry lands the cash during the week on Soaring Ambition (outside).

While the top hoop rated the resuming Bottega one of his best hopes of the day, Berry said it was impossible not to get excited about the Generation Next horses at this time of year.

Soaring Ambition rattled home late to win at Wyong, Bright Blue Star for Jamie Richards likely awaits him on Boxing Day in Queensland, while punters should keep an eye out for Team Snowden’s Russian Conquest.

Even Man In The Mirror, which is listed to race against Jamarra on Saturday, is also entered for the races next Wednesday with Berry to ride.

Berry was happy to rate Man In The Mirror as good as Soaring Ambition, which is the $8 second favourite behind Coolangatta ($2.25) for next month’s Magic Millions.

“I thought the gate with Soaring Ambition would have made it tough for her, but she was able to overcome that and put them away,” Berry said.

“Man In The Mirror is her stablemate and I also have a high opinion of him. He’s a bit more of a laid-back horse with his share of ability. I like what he has done all the way through from his trackwork to jumpouts to his trials. They will have some fun with him.

“I’m actually booked to ride that horse next Wednesday.

“I’ve also ridden [Saturday rival] Hyde. He travelled up well and looked the winner on the turn, but he got a bit lost. The winkers will help him. He’s a horse who cost a bit [$600,000] and he’s a beautiful horse to look at. He just needs to iron out a few of his kinks.

“Jamarra won at Bendigo last start. Ciaron had two two-year-olds come to Sydney last week [El Padrino and Boldinho] and they both ran [first and fourth in the Inglis Nursery].”

Berry said two-year-olds having their first race start the Sydney clockwise way of going was never an issue now most tracks allowed trainers to work their horses the opposite way when possible.

Bottega resumes from a lengthy spell in the 1400m with Berry seen not moving a muscle when guiding the five-year-old entire to an effortless trial win behind the equally impressive – and weekend rival – Oscar Zulu.

Berry wore the famous Altomonte family colours on Golden Slipper winner Overreach and Expressway Stakes winner Standout, and knows Bottega has rubbed shoulders with much better company than what awaits him late in the day at Sydney’s headquarters.

“He’s always shown good ability – he’s lost his way a few times – but he gave me a good feel the other day when I trialled him,” said Berry, whose past 50 rides prior to him heading out to Thursday’s Hawkesbury meeting featured seven winners and a frustrating but consistent 18 minor placings.

Trainer Gerald Ryan said Bottega had always raced well fresh and, despite being a five-year-old entire, he maintained a healthy appetite for racing.

“He’s a bit like Standout, they’re both as quiet as lambs,” Ryan said.

Despite contesting some decent races in the past, Bottega will be given his chance to get back into the winner’s circle, something Ryan wants to see for the first time with this horse in 19 months before nailing down a summer and early autumn campaign.