John Sargent always knew he had a good one in Brandenburg, and he might be the forgotten horse of the golden generation of three-year-olds.

A decision not to rush in the spring paid its first dividend when Brandenburg was a surprise winner in the group 2 Hobartville Stakes (1400m) at Rosehill on Saturday. 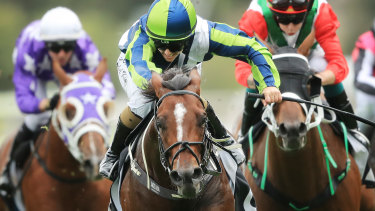 ‘He’s only going to get better’: Rachel King drives Brandenburg to the line in the Hobartville Stakes.Credit:Getty

Unfancied in the market at $41, Brandenburg eye-balled favourite Microphone ($2.25) and was simply too strong holding off Reloaded ($12), which grabbed second with late surge. Brandenburg was moved from $15 into $9 for the Randwick Guineas in couple of weeks.

“We looked after him in the spring and just took him down for the Carbine Club. He had to front up today and show he was up to these serious horses,” Sargent said. 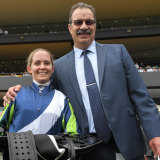 “It has been a bit of an on-speed bias today but I was very impressed with the way he did that. That was D-Day.  We had to see him around the big boys, and he showed us he is up to them.

"He was always a bit immature, but he come back bigger and stronger and has really grown up now.”

Hugh Bowman had controlled the tempo to suit himself early on Microphone, but when he needed to sprint he couldn't match Brandenburg, which had been to his outside.

Rachel King had gained some confidence from riding Brandenburg, which was runner-up in the Stan Fox Stakes and Carbine Club in the spring, in his morning workouts.

“He hadn’t performed at the top level yet, he was a bit of a forgotten horse,” King said.

“He has done nothing wrong his whole career. He has never finished out of the first three.

“He only going to be better. He hit the front today and didn’t know how to put them away.

“He was going a bit sideways, so when he matures that way there will be improvement.”

James McDonald made a late surge on Reloaded and believes he will improve into the Guineas, as does trainer Chris Waller.

“He has never run a bad race and he will be spot on for the Guineas,” Waller said.

He also had Pancho, which ran fourth but just couldn’t match the sprint of the other three.

There was a gap to the stayers, and they were all hitting the line hard in a race of their own. The sit-and-sprint nature was never going to suit group 1 winners Shadow Hero, Castelvecchio and Warning.

Shadow Hero and Castelvecchio  charged to the line three lengths from the winner, with Warning another 1½ lengths away in seventh.

Josh Parr was smiling about Shadow Hero saying “he continues to impress me with everything he does this preparation".

Castelvecchio ran the fastest final 200m of the race, and Kerrin McEvoy can’t wait to step up in trip.

“He just found then a bit too sharp short of his best distances, but I loved the way he got balanced up and powered through the last two furlongs,” McEvoy said.