They’ve written plenty of songs about having fun on the border, and Tuesday’s feature Albury meeting is set to be music to the ears of leading home trainer Donna Scott.

Her Royal Highness of Hazel Park in east Albury is gearing up for an early double strike in a meeting that’s attracted huge fields on a likely Soft 6 surface. 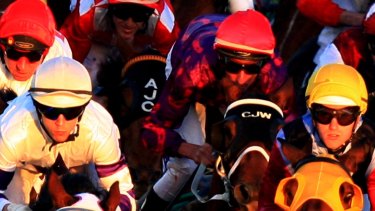 Early on the card, the stable will be confident with resuming and smart filly Rapid Ruby in a Class 1 Hcp over 1000m.

A three-year-old daughter of prolific sire Rubick, Rapid Ruby hasn’t started since tackling much tougher BM 64 grade at Flemington in January, only 17 days after she had blitzed a maiden field at Stony Creek.

And she races at home for only the second time, seven months after roaring home to miss narrowly as a hot favourite.

Then, among a string of longer-priced chances, the Scott yard saddles up promising Nicconi filly Clever Art in a modest Fillies & Mares’ Maiden Plate at set weights over 1175m.

On a 10-day back-up, Clever Art almost pulled off a huge-priced upset on debut when she motored home late to miss by a long head at Wangaratta after drifting to $41.00 in betting.

Meanwhile, not only is he a serious chance in a Maiden Plate (1175m) for the boys, but Jerilderie’s Gobbo’s Mate surely has a mortgage on the most clever name across the meeting.

By good wet track sire Star Witness and out of the mare Bad Romance, the three-year-old is quite obviously named after the controversial former defence barrister and police informant Nicola Gobbo.

The woman who became infamously known as “Lawyer X,” was a long-time informant, especially in the four-year period during Melbourne’s sinister gangland wars.

All these years on, Gobbo’s Mate testifies on the track for only the fifth time for veteran trainer Phil Sweeney, having beaten all bar the winner three times at Corowa since debuting back in mid-December.