Home » Sports News » Healy hoping for a change of fortune

Australia and Sydney Sixers star Alyssa Healy will need to fight her way through a sudden batting slump after a day when the Melbourne Renegades confirmed their WBBL title credentials.

The two Sydney-based clubs faced their Melbourne counterparts on opposite sides of the country on Saturday, and it was the Melbourne Renegades and Sydney Thunder who prevailed.

At Perth’s picturesque Lilac Hill, Sixers and Australian figureheads Healy, Ellyse Perry and Ash Gardner were unable to will their side (9-130) home, the Renegades completing a 12-run win, their third straight. 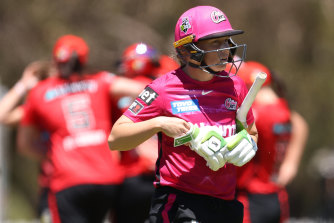 Alyssa Healy walks from the field after being dismissed. Credit:Getty Images

In Launceston, the Thunder finally had reason to celebrate, posting their first win of the season thanks to a 19-run victory over the Melbourne Stars. The defending champions had been winless in their opening five matches.

There were stars aplenty in Perth, where Renegades skipper Sophie Molineux (1-17) claimed Healy (1 off four balls) for the sixth time, the latest after the dashing opener stepped down the pitch, only to be bowled by the left-arm finger spinner.

Having begun the tournament with a half century, Healy has only 23 runs in her past four innings, and she will be hoping for a change of fortune against the Perth Scorchers on Sunday.

When Gardner (4 off 4 balls) was run out and Perry (28 off 28) was unable to deliver a match-turning knock, the Renegades were well on their way to their fourth win of the season and top spot on the ladder.

“It was a really gutsy effort,” Molineux said, whose attention now turns to facing the Adelaide Strikers on Sunday.

The Renegades have yet to win a WBBL title, but this team has rich talent.

For the Sixers, they have only two wins, sit second bottom, and will again contemplate shuffling their batting order, having on Saturday seen Perry rejoin Healy at the top of the order.

Earlier, Indian star Harmanpreet Kaur (43 off 42) and Jess Duffin (41 not out off 32) were the backbone of the Renegades’ 7-142. Kaur was player of the match when the teams last met, and she was again in fine touch.

Perry opted to not bowl herself against the Renegades last weekend, but this time took the new ball and was rewarded when she had Eve Jones caught. However, the champion all-rounder was only seen for two overs, as the Renegades put on 45 in the opening six overs – their best power play of the tournament.

Gardner was drafted in surprisingly late but was rewarded when the off-spinner had Molineux caught slashing. Josie Dooley then fell attempting to sweep, leaving Gardner on a hat-trick. There was only one problem, it was the end of the 19th over, meaning Gardner would not have another bowl.

In Launceston, Tahlia Wilson (53 off 53) and Phoebe Litchfield (49 off 42) provided the platform for the Thunder’s 5-133. The Stars struggled to have an impact with the ball, for two wickets came from run-outs.

In reply, the Thunder made two early inroads when Stars skipper Meg Lanning (2 off 6) and emerging star Annabel Sutherland (4 off 6) were bowled, leaving the Melbourne side at 2-10.

Elyse Villani (38 off 31) steadied her team, but her dismissal turned the contest the Thunder’s way. Left-arm finger spinner Sam Bates (4-14), including 2-8 from her opening three overs, was a stand-out, while Deepti Sharma (3-25) destroyed the Stars’ middle order.