Galaxy Raider had earned a reputation as an honest trier but a non-winner, with just three victories in 31 starts to his name.

But if the Grahame Begg-trained seven-year-old can score an upset win in the group 2 Blamey Stakes at Flemington on Saturday he will not only land his third race in a row in the space of seven weeks, bringing his career tally to six wins, but also a place in the star-studded field for the $5 million All-Star Mile at Caulfield a fortnight later.

It's been quite a turnaround for a galloper whose career had been plagued with injury and ill fortune over the past couple of years, and credit goes to Begg and connections who had the skill and patience to nurse him back to health.

The Blamey is a step up in class for the son of Hard Spun, but his two most recent runs suggest he can measure up. 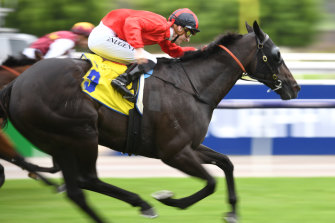 At his penultimate start he beat Vaucluse Bay, who won his two subsequent races. And last time out he got the better of Streets Of Avalon, who franked the form in spectacular style by winning the group 1 Futurity Stakes at Caulfield last Saturday.

Begg will stick with claiming apprentice Teo Nugent in the $200,000, 1600-metre Blamey, and if he does get into the All-Star Mile the young rider could keep the ride.

''It's taken a while to get him back to form after the injuries he had and this is a tougher race, but it's worth having a go,'' says Begg.

''He fell in a sprint race down the straight at Flemington on Cup day in 2018 and got a stress fracture to his face and that then infected his sinus.

''He got over that and had one run and then got a virus, which set him back. We got him ready to race again and he popped a splint bone and that took more recovery time.

''We put blinkers on him the day he beat Vaucluse Bay and that seemed to help him.

''It's been a frustrating time for the owners and he's always been a bit misjudged but he needs things to go right in the run – he needs a fast-run race so he can finish over the top. My only fear for Saturday is that we won't get a genuine pace.''