Mark Wood insists he can bowl even FASTER after recording the quickest ever World Cup spell ever against Afghanistan as he clocked an average delivery speed of 92.6mph… but rules himself out of joining the 100mph club

Mark Wood cut an unlikely figure as he stood in the bowels of the Perth Stadium and talked of bowling even quicker than the fastest spell yet seen at a Twenty20 World Cup.

Wood is too slight to look like the fastest bowler in the world. He is certainly far too amiable to fit the stereotype of a ‘fast and nasty’ sensing the batter’s fear.

But when his body allows, and thankfully he is over the elbow injury that blighted his summer, Wood is as quick as most who have ever played the game, as he showed in England’s near perfect display in the field in their opening victory over Afghanistan. 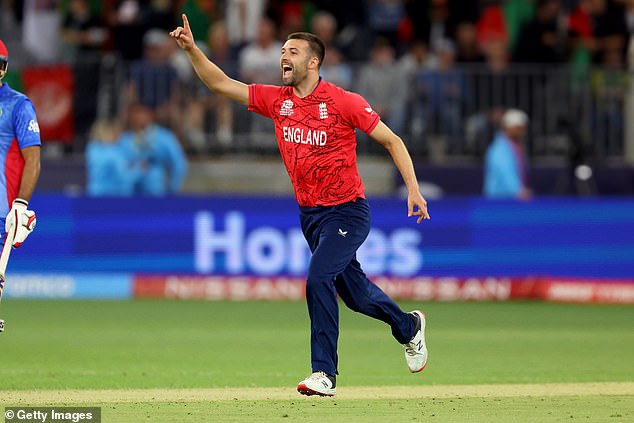 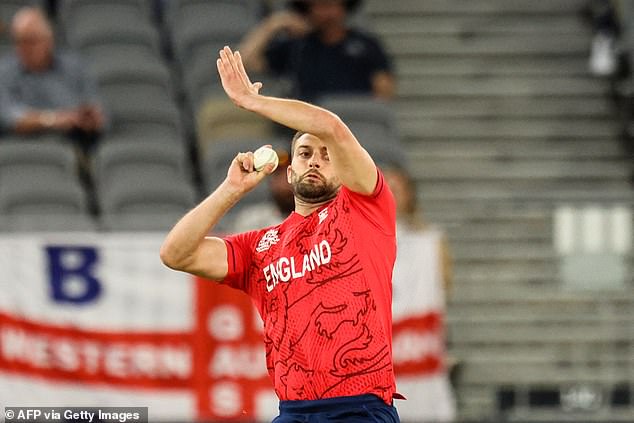 The Durham seamer recorded an average pace of 92.6mph against Afghanistan on Saturday

His first ball, timed at 91mph, took the edge of Rahman Gurbaz’s bat, his second was recorded at 96 and he went on to surpass Fidel Edwards in 2009 as the deliverer of the fastest spell in any short-form World Cup.

Every delivery was above 87mph and the average was 92.6 but Wood, England’s most potent weapon in their pursuit of uniting the 50-over and T20 World Cup titles, believes there is more to come.

‘I wasn’t really aware of how quickly I was bowling,’ he said. ‘I feel I have more in the tank than that. I struggled in my first couple of overs because I was slipping quite a bit.

‘Maybe I’ll have to get those long Aussie spikes or something like that. It’s great to hear what speeds I was reaching but I want to keep pushing the boundaries to get quicker and quicker.’ 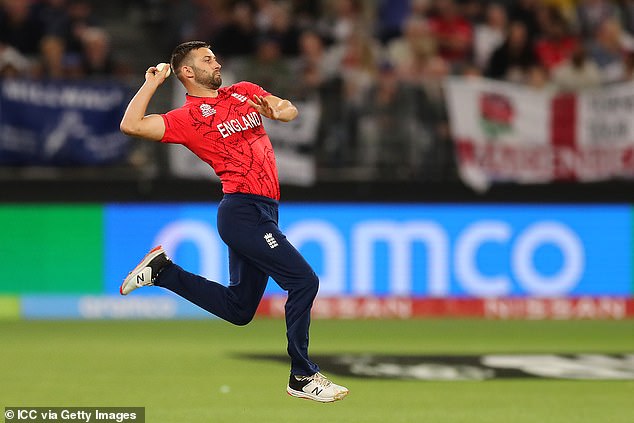 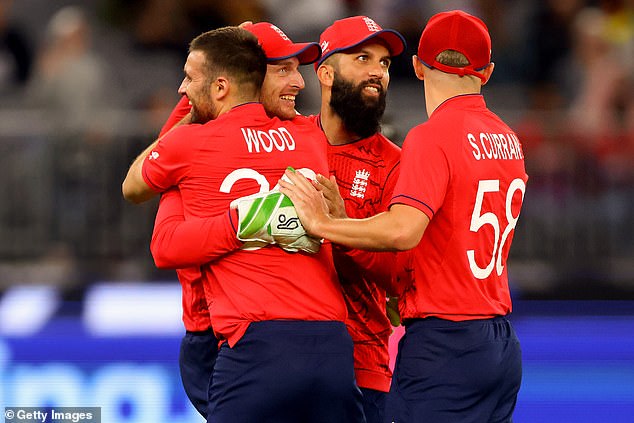 Shoaib Akhtar has the six fastest recorded deliveries since the introduction of speed guns while the ex-Pakistan fast bowler and Australia’s Shaun Tait are the only two ever recorded at more than 100mph, although another Australian in Jeff Thomson might have something to say about who the quickest of all-time might be.

But Wood’s modesty took over when asked if he could join the 100mph club, starting with England’s next assignment against Ireland here on Wednesday.

‘No, I don’t think so. When you look at the lads who are getting there I don’t think I’m in their bracket. I do think I’ve got more consistently higher pace than others around at the moment and I feel in a great place. Hopefully I can keep that going.’ 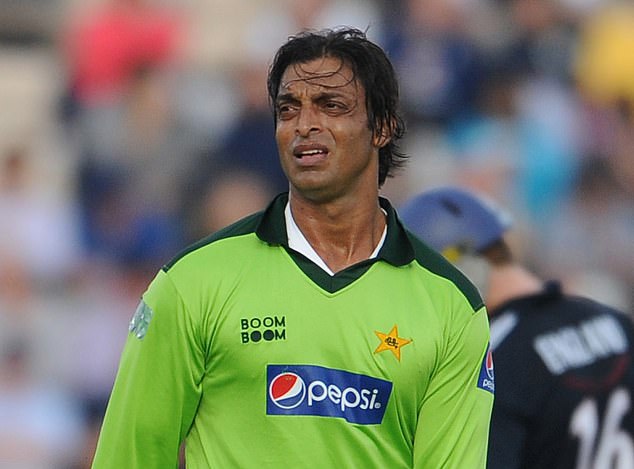 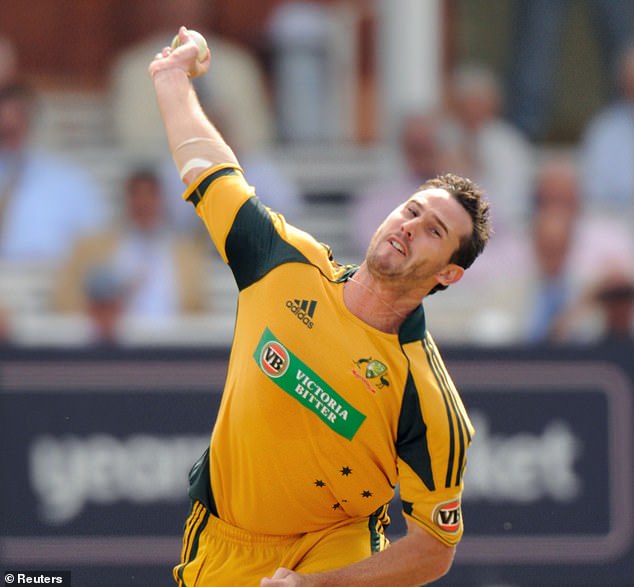 Wood’s speed, a five-wicket haul for Sam Curran plus outstanding catching from Liam Livingstone, Adil Rashid and Jos Buttler, were highlights of an impressive display on the huge outfield of the Perth Stadium on Saturday as Afghanistan were bowled out for 112.

But England will be a little concerned about their batting. Alex Hales may have made 84 in England’s first warm-up victory over Australia here but he has done little since and provided the only fielding blemish on Saturday when he spilled a diving chance at point. Hales, finally forgiven by England after a three-year exile, could do with a score against Ireland.

Dawid Malan was back to being the ball-chewing figure at No 3 that has sometimes concerned the doubters, taking 30 deliveries over his 18, Ben Stokes was bowled on the charge as England sought a rapid victory to boost their net run-rate while Harry Brook showed his inexperience when holing out. 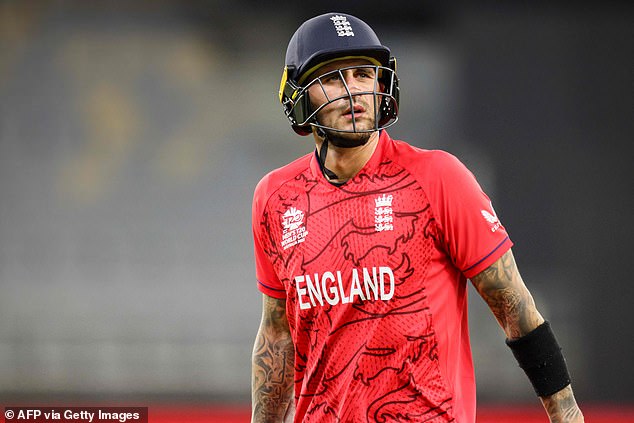 But Livingstone returned from a ‘12-week injury’ in seven weeks to calm any nerves by guiding England home with 11 balls in hand. All in all, with Australia’s net run-rate taking a pasting at the SCG, it was a good opening day.

England’s Super 12 showdown with Australia looms large here on Friday, but first come an Ireland team who defeated England at the 2011 World Cup in India. Then at the MCG it’s the game where England may just ruin Australia’s party by knocking them out of their own tournament.

‘It’s a big motivation to knock them out,’ said Wood, who hopes to play in both Melbourne games.

Meanwhile, Richard Gould has been named as the new chief executive of the ECB. Former England women’s captain Clare Connor has filled the position on an interim basis after Tom Harrison quit in June.