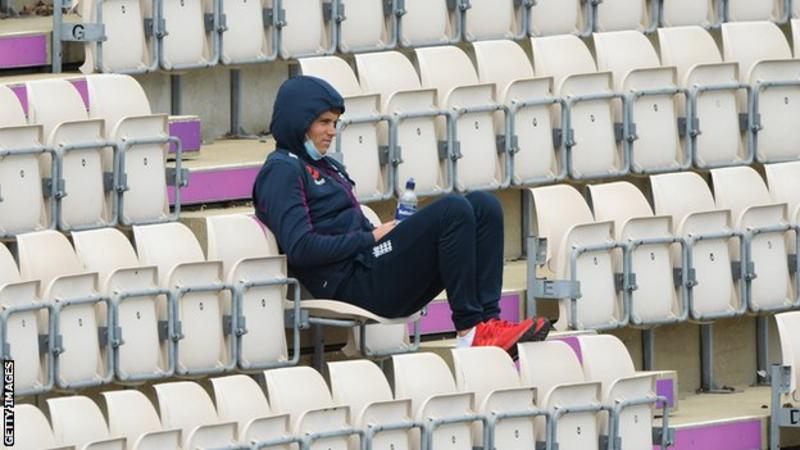 Surrey batsman Pope made an unbeaten 55 as Team Buttler set Team Stokes a nominal 255 for victory.

All-rounder Stokes, who will captain England in the first Test against West Indies, was 37 not out as his side reached 157-4.

The first Test of the three-match series begins on 8 July in Southampton and will be held behind closed doors.

A 22-man squad will be named on Saturday.

Opener James Bracey, who scored 85 on the first day, further impressed in a 61-run stand with Rory Burns for Team Buttler.

Joe Denly batted at three for Team Buttler but fell to his second ball, trapped lbw by Jack Leach, before Burns was bowled by Moeen Ali.

However, Leach was expensive in taking 3-82 from his 13.4 overs, and was hit for five sixes as Team Buttler accelerated.

Dom Bess seems the most likely to be England’s leading spin bowler in the first Test, bowling economically across the three days.

Stokes reached 37 from just 17 deliveries and Zak Crawley made 34 in quick time before falling lbw to Mark Wood.

In the absence of any fans, Wood serenaded the teams onto the pitch with a rendition of Jerusalem.

“It has been quiet, especially at a ground like this where there is nothing going on outside, but that doesn’t change the quality of the cricket,” Pope said.

“Whether we are going to play a bit of music out of the speakers I’m not sure, but we can find ways of creating our own atmosphere I’m sure.

“We’ve got to find a way to do that when we get on top or when we need a bit of energy.”