Alphonse de Neuville’s oil on canvas, The defence of Rorke’s Drift 1879, hangs in the Art Gallery of New South Wales, about 40 minutes’ walk from the Sydney Cricket Ground.

Its depiction of an obstinate English rearguard is synonymous with what is now a much more contested view of the British Empire than when de Neuville was commissioned to paint it. But the fourth Test draw eked out by Joe Root’s men in Sydney was drawn from similarly stubborn stuff.

On a desperately poor tour, England will celebrate the fact that their venerable last pair of James Anderson and Stuart Broad survived the final 12 balls of the match to avoid a 5-0 whitewash. 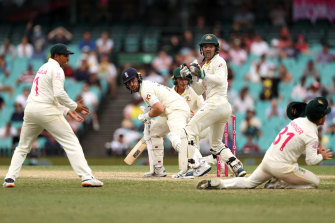 No one should be left in doubt, however, that they were helped by sloppy catching, a modicum of Sydney rain, and Antipodean weakness in the fourth innings of games that seems connected to the lack of a specialist wrist spinner in their XI.

When fading light forced Pat Cummins to call upon spin for the final four overs, it was Steve Smith’s seldom-seen leg breaks that took the ninth wicket by flinging the ball into the rough outside a left-hander’s off stump. It’s a question that Nathan Lyon, no matter how good he has been, is unable to pose.

In truth, Australian smiles looked more likely to end up rueful rather than joyful for most of the day. It seems no coincidence that two of England’s most noteworthy efforts of the series have arrived in the fourth innings and the fifth day — so too did India’s last summer.

There is undeniably a blind spot for the Australian combination when asked to bowl out an opponent in the final innings, one that has persisted through the three years of Tim Paine’s captaincy into the first series led by Cummins.

Headingley 2019 and Sydney and Brisbane 2021 all eluded what looked like a solid grasp, and even Old Trafford 2019 was closer than it might have been.

As with Paine at the SCG a year ago, Alex Carey lapsed behind the stumps, this time shelling Haseeb Hameed and later missing a run-out chance to see off Jonny Bairstow. Australia’s match tally of six dropped catches, the missed run out and a wicket off a no-ball meant that many more than 20 chances had to be created. 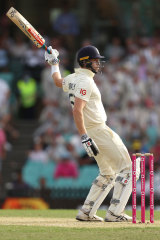 Zac Crawley evades a delivery at the SCG. Credit:Getty Images

Where Jos Buttler had got close to retrieving an otherwise hopeless scenario with the deadest of bats in Adelaide, at the SCG the match-saving rhythm found by Zak Crawley and Ben Stokes was of a more positive kind.

Crawley stood tall to pull deliveries that the similarly tall Cameron Green also excelled at dispatching on day four, adding to the sense that he posed more of a threat to Australia than Hameed and may also have complemented Rory Burns. It took a ripping yorker from Green, fading into middle stump, to defeat Crawley.

Scott Boland, chosen in place of the side-strained Josh Hazlewood, turned out to be Australia’s most consistent threat all day, defeating Joe Root once again to send England’s captain straight back into the SCG nets. After eight dismissals in the cordon out of eight, it was questionable how much this latest venture would help.

Stokes always made sure to hit the loose ball, and was helped by the curiously flat trajectory and high pace preferred by Lyon.

Troublingly for Australia ahead of three Asian tours in a row, Lyon again seemed reticent to take on the lead role, or at least to experiment with speeds and loops to find the best velocity at which the ball would spin. He was encouraged in this, perhaps, by the quicker delivery that zipped through a fatigued-looking Dawid Malan early on.

Mitchell Swepson, of course, has sat in reserve for three years, consistently improving his accuracy and economy while also offering the ability to turn the ball sharply out of footmarks that Lyon, trying to spin the ball the other way, does not touch. Tanveer Sangha, of NSW, is also emerging.

As Stokes and Bairstow took England deeper into the final session, Cummins began to look for wrist spin options, such as Marnus Labuschagne, that may have prompted Lyon to slow his tempo.

Moving his mid-off in, Lyon lured Stokes down the wicket for an unconvincing boundary, and then next ball found bite and spin at 84km/h for a catch at slip. Steve Smith, twirling down his leg breaks at a Warnesque 80km/h, found the most purchase of all. The second new ball loomed.

Usually so relentless on a shorter length and just moving away, Cummins found sharp inswing for Buttler, who somewhat unluckily hit his boot with the bat to open a clear path into the back pad. Mark Wood may have known what was coming two balls later, but was powerless to prevent a sandshoe crusher that arrowed in unerringly at leg stump.

Bairstow, who followed his splendid counter-attacking hundred with a wonderfully dogged stay, got to within 11 overs of the finish. Left with 64 balls for the final two wickets, Cummins tried Starc, himself, Boland, Lyon and Smith, fielders crouched around the bat in hope.

It’s unlikely in those moments that Cummins would have wished for extra overs on account of an earlier declaration the night before. But in an otherwise exceptional start to his tenure, a fourth innings trouble spot remains. England’s supporters, for once on this tour, woke up to good news.