Haseeb Hameed hits out for England

It is not just that England are still in this Test match going into day five. But after their openers Rory Burns and Haseeb Hameed opened up in late afternoon and closed up in the late evening, undisturbed on 77 for no loss after India set them a target of 368, they might be ahead – certainly ahead of where India felt they should be at the end of a Sunday where they did everything right with the bat to finish their second innings on 466.

They were bowled out if not got out, putting on 196 to their overnight 270 for three and for all the world looked to have taken the hosts out of the game. The body language alone suggested England were defeated men, chasing leather as Indian batters from top to bottom contributed to their cause. But a sedate conclusion to day four, the night’s sleep and a pitch is not showing any of the usual signs of irregular bounce usually seen at this point in a match. The 291 left to get is vast, but the task looks very manageable.

For the most part, Sunday at the Oval felt like the kind of day England usually experience in Australia, at one of their many vast stadiums that can feel like Roman death pits to a bowler.

You know, one of those on an Ashes tour that hammers them into the dust when they can seemingly be hammered into the dust no more. Sun baking everything underneath it, three right-arm seamers sending down in excess of 30 overs each. Boundaries flayed on the regular and a growing fourth innings target casting an ominous shadow like a spaceship above the White House.

The punishment came to an end after 148.2 overs of graft, of which 33 were bowled by James Anderson. England’s leading wicket-taker has always been their most willing grafter, but not since the Sydney Cricket Ground in the New Year’s Test of the 2017/18 Ashes had he sent down as many (34 overs, one for 56). The solitary success – KL Rahul, no. 632 on Saturday afternoon – remained his only success of the innings as India were eventually bowled out for 368.

However, there was not the crash and burn that usually follows. Instead, a weird peace – you might call it serenity – as Burns (31 not out) and Hameed (43*) blocked, tucked and even drove their way to stumps in the face of this never-been-done-before chase. Australia at Headingley in 2019. Pakistan at Emirates Old Trafford in 2020. Why not India at The Oval in 2021 to continue this new tradition of outlandish fourth innings victories?

Sunday began with news of a Covid-19 outbreak among India’s group, with head coach Ravi Shastri returning a positive lateral flow test and, in turn, taking out three other coaching staff. Of some consolation was that the plan for the day did not require a meeting of the brain’s trust. Picking up with a lead of 171, more runs were very much the sole order of the day.

And thus it was to England’s credit they kept a lid of proceedings for those first 26 overs. Even amid the odd lapse, such as not starting the session with Chris Woakes and burning their final review on a speculative bad-pad shout, bowling plans were consistent and pressure unrelenting. Only 59 were scored, in part because of the three top-end wickets.

Two of those came from Woakes when he was eventually introduced from the Pavilion End after nine overs of play. He immediately trapped Ravi Jadeja (17) in front, after the left-hander misjudged a defensive shot having left 17 of 58 previous balls faced.

There might have been a second in his first over when Ajinkya Rahane padded up to a delivery and was given out on misjudgement. A DRS review saved him from a three-ball duck, before a greater misjudgement bagged him an eight-ball one – and Woakes’ second of the innings – as Rahane swished across the line. In 14 deliveries, 296 for three had become 296 for five.

And when Moeen Ali picked up Virat Kohli for the sixth time – beating the India captain on the outside edge for a catch to Craig Overton – suddenly India were being pushed back, not just held up. A lead of just 213 with four wickets remaining and the prime cuts off the table brought optimism with the glorious afternoon sun. 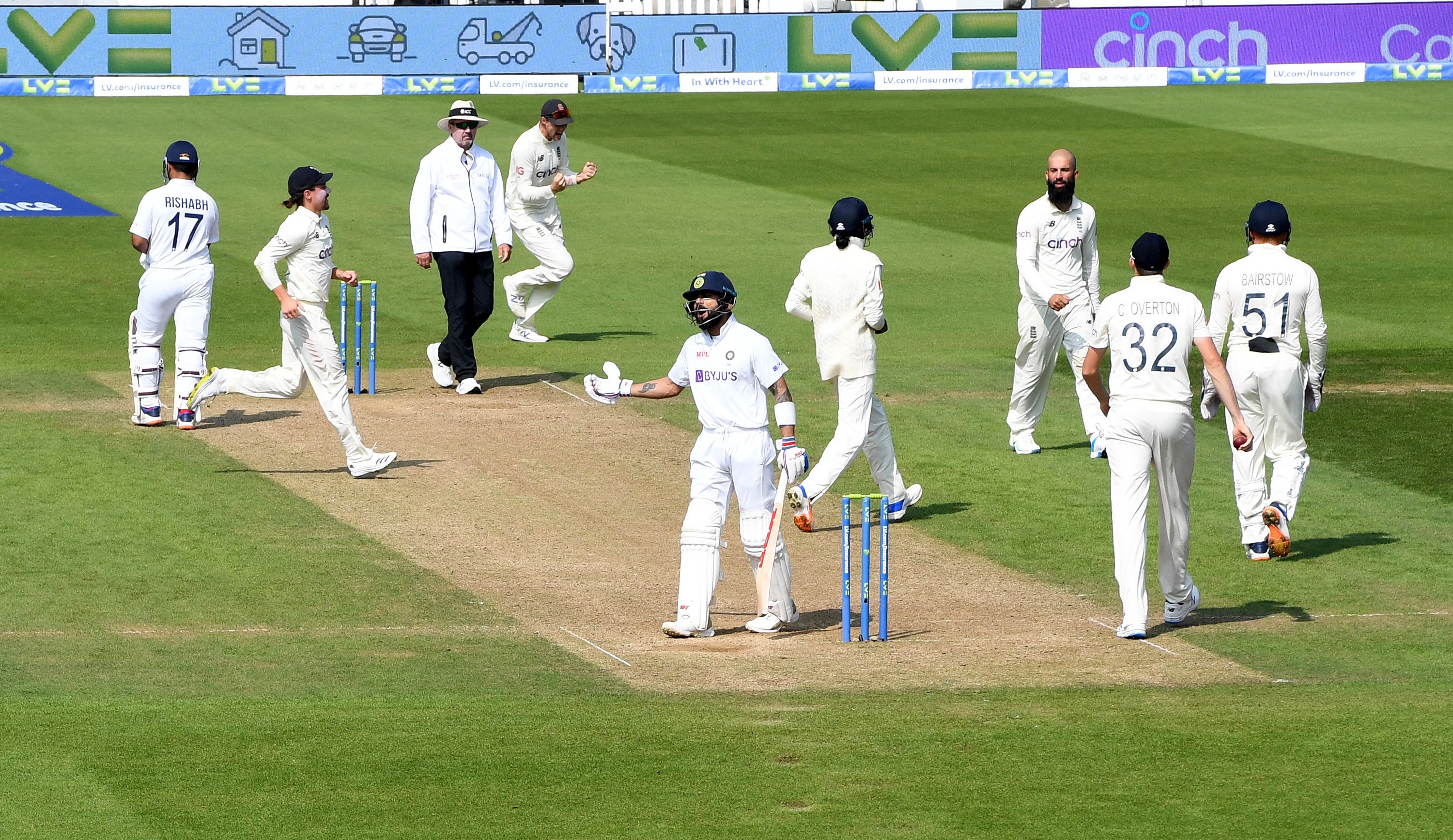 Virat Kholi is caught out by Craig Overton

Alas, the hope of a quick-ish kill after lunch, when the lead was 230, was forgotten as Rishabh Pant and Shardul Thakur cracked on with their respective left-and-right abandon.

It didn’t matter that India’s last recognised batting pair failed to make it through the session, with both back in the hutch 20 minutes before tea. By the time they were parted – Thakur edging Joe Root to Craig Overton at slip, five balls before Pant joined him after striking a return catch to Moeen Ali – they had put on a crisp 100 runs, taking the match comfortably into “un-loseable” territory with a lead of 313.

Their dismissals to spinners compounded the misery experienced by England during their 155 balls in tandem. Root persisted with Anderson, Robinson and Woakes for the hottest part of the day, even though Thakur was more than happy for pace on the ball to drive with and Pant finally able to suppress his urges for the greater good. The former’s 60 – his second half-century of the match, from 65 deliveries – included six boundaries, including sending a Robinson slower ball into the Pavilion to move from 43 to 49. The latter’s half-century – a first of the tour – came from a subdued 105, and just four boundaries. He was dismissed off number 106 trying to strike a fifth.

Compounding the misery of the seventh wicket stand was that it should have been ended on 64: Pant dropping into the leg side and running without checking if Thakur was agreed with the single. He didn’t, and Pant was so far down that Moeen could have continued his run in from square leg and taken the bails off by or waited for Jonny Bairstow to make it to the stumps and do that for him. Instead the vice captain missed with a throw at the stumps. Haseeb Hameed following up could not conjure a second chance.

Umesh Yadav (25) and Jasprit Bumrah (24) instigated a late flurry of 48 runs before becoming Woakes’ third (three for 83) and Moeen’s second (two for 118). With India’s second innings finally done, 368 ahead, Burns and Hameed strapped them on and headed back out to the middle focussed on the final 36 overs remaining.

Proactive with their rotation of the strike and clear with what they could leave, there was not much Burns or Hameed could not negotiate. The rough created by England’s right-armers over the wicket from the Pavilion End gave Jadeja’s left-arm spin some joy, but was wide enough for the right-handed Hameed to kick away and the left-handed Burns to set-up his pad as a last line of defence outside off stump, behind any pushes or sweeps he tried.

There were the occasional skittish moments: the odd bit of bounce or movement off the straight. India squeezed out an umpire review for a bat-pad catch that was hit into the ground, before using one of their own for an LBW shout also against Hameed that was almost as desperate. The biggest alarm came three balls before stumps, when Burns dabbed into the ground to short leg, set off but aborted just in time to get back before the reflex shy at the stumps came. The two overthrows that followed were the last runs of the day.

More good weather on Monday and a full complement of overs on this first pitch has perhaps moved England into the position of favourites. If such a tag can be placed on one more than the other, that is, given how often both teams have defaulted their winning positions to the other.

All four results are still in play, though with Root in the form of his life still to come, Virat Kohli will be the most restless of the two captains. A remarkable state of affairs given where this game started on Sunday morning.