Perry has been nursing a sore shoulder since injuring herself in the field in the WBBL but her latest issue is with her hip. 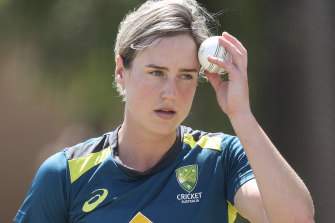 The injury forced her from the field during Australia’s comfortable win over Bangladesh on Thursday night in Canberra.

The Australians are hopeful Perry will play in the do-or-die game at the Junction Oval but will not know her availability until the team trains on Sunday at the earliest.

“Any time you get a niggle, I suppose, there’s doubt but I’ve seen her push through what seems to be worse than that and be able to perform,“ Mott said.

“We’ll have to assess her over the next 24-48 hours and make sure she’s right.

“I won’t know much until we train in two days’ time. From my point of view it’s business as usual and we’ll wait on the medical opinion.”

Like many champions, Perry has a proven record of not only playing under considerable duress but also playing well. Australian are banking on that to be the case again in one of their most important matches on home soil.

“You ask Kate Beerworth, our physio, she’s up there with the best she’s worked with. She’s incredibly resilient.

“The day before the Ashes we thought she was a 50-50, she came out and took wickets and scored runs. We’re not that concerned. She’s proven over her whole career she doesn’t miss too many games.

“She’s had a lot of niggles over the last couple of years and still manages to get through," Mott said.

“We’re really confident, especially having the day off tomorrow, she’ll have plenty of time to get ready for a huge game against NZ.”