Seven jockeys escaped a ban at Fontwell on Sunday after missing out a hurdle in the final race, an incident which resulted in seventh passed the post Dharma Rain being awarded victory.

All the other runners still going in the From The Horses Mouth Podcast Mares’ Handicap Hurdle were disqualified, including Neil Mulholland-trained 11-1 winner Just Henry, after they by-passed the third-last hurdle in the back straight.

Jockeys reacted to officials on the track carrying a chequered hazard flag and directional markers who were in place a short distance after the hurdle. They were trying to guide the field around Bluebell Sally who had been pulled up on the first circuit after sustaining an injury. 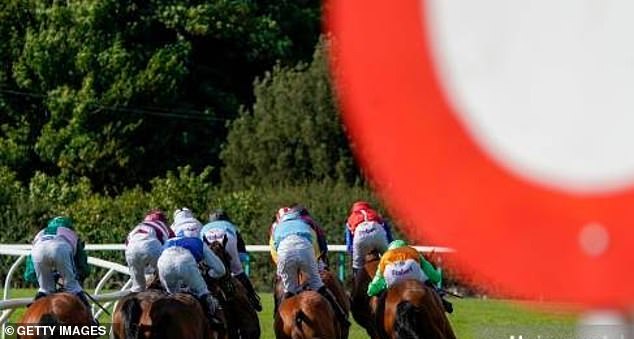 Wrongly they thought that officials were trying to make them miss out the obstacle.

Jack Tudor, who initially looked like he was going to follow his fellow jockeys around the obstacle, corrected his mount to then correctly jump it, a quick-thinking move that secured a victory his mount had never looked like securing.

After the stewards’ enquiry, Jerry McGrath, the most senior jockey in the race who passed post in fifth on 9-4 favourite Kentford Mallard, said: ‘Visibility was very bad and I had gone through two sets of goggles. Until we got close, it looked like the chevrons were in the hurdle. Thankfully common sense has prevailed.’

The incident gave Dharma Rain a first over jumps for his trainer Clare Hobson for 487 days,

The incident was the third mishap for the sport in four days following the disqualification and suspension of conditional jockey Alex Thorne after he failed to follow the correct weight procedure at a re-configured Taunton on Thursday after he had ridden a winner plus a dead-heat being called in the last race at Cheltenham on Saturday because fading light made the photo-finish image impossible to decipher for the Judge.

Whyte slams 'c***s' Dubois and Warren for ‘quitting’ against Joyce