A third Qatar Prix de l'Arc de Triomphe proved beyond even Enable and Frankie Dettori on Sunday when her turn of foot was blunted by the Longchamp mud in a slowly run race, and she could finish only sixth – unplaced for the first time in her career.

Superior armies, notably the French at Agincourt in 1415, have lost battles because they got stuck in the mud, so she is in good company. She is certainly not the first, and she will not be the last horse, to have been undone in the heavy.

Eventually, the great mare finished one place in front of her stable companion Stradivarius in the middle of the pack after a rough sprint up the home straight at the end of which Sottsass, a 13-2 shot and last year's French Derby winner, emerged victorious, beating In Swoop a neck. 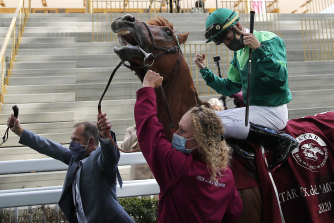 However, it was not quite over and after a lengthy inquiry into the scrimmaging a furlong-and-a-half out, Sottsass was finally confirmed a first winner in the Arc for trainer Jean-Claude Rouget and jockey Cristian Demuro, like Dettori, an Italian by birth.

At one stage, Enable became the meat in a sandwich, as can happen to horses not travelling well, but while it did not help her, it hardly hindered her either and so a great career concluded with a bit of a damp squib but, for racing and everyone involved with her, it has been a great ride.

On the face of it the withdrawal of Aidan O'Brien's four runners because of contaminated feed the night before might have opened up the goal a little for Enable.

But, one suspects, had Sovereign and Serpentine been involved, the pace might have been that much stronger than that set by the miler Persian King, enabling him to get home in third behind the soft-ground specialist In Swoop. 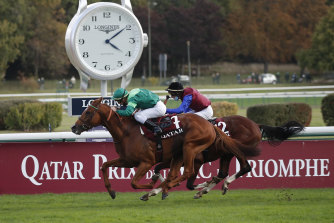 Jockey Cristian Demuro and Sottsass race to the win. Credit:AP

However, Dettori was quick to blame the heavy ground for "killing" Enable's action. He was level with Sottsass turning into the straight and if anything travelling better. It was just that Enable was unable to pick up in it.

"I went to make the running but for the first 200 metres she was out of her comfort zone," he explained. "She came good later and at the 500 I got a good spot, but there was nothing there. She couldn't pick her legs up, like the last furlong last year.

Trainer John Gosden, who watched from home, added: "The jockey said it was deep and holding and drying out. We could have done with a shower of rain. He never felt comfortable. I thought he might go on, but he chose not to. The one thing about Aidan's runners, it wouldn't have been a trot and a dash. Pace and the ground – it's as simple as that, it's not very complicated. That is horse racing. Pace and conditions are always key factors – sometimes they work in your favour, sometimes they don't. If you can't take the punches in this game you shouldn't be in it, but I'm very pleased to see Jean-Claude win it. 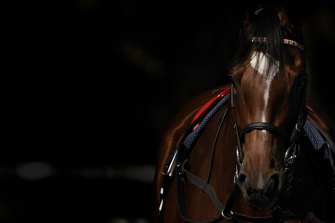 "She seems great after, she didn't blow hard, and we'll see what the owner wants to do. Stradivarius was the same. He likes a target and was three wide throughout and was having a play afterwards. They've both gone to France for a lovely piece of work in horrible ground!"

Lord Grimthorpe, Khalid Abdullah's racing manager, said there were no regrets at having tried again for a third Arc.

"Enable has given us so much, to Prince Khalid and the whole sport. She has been such an important part of our lives. We have no complaints, no excuses. She didn't handle the ground as well as we hoped," he said.

"She's happy, she retained her enthusiasm, she loves racing, her routine, the sport, and somewhere along the line she loves Frankie, that's been a fantastic relationship. It's been a huge bonus having her another season.

"Expectation was enormous but to win a third King George on its own is something fantastic. But three King Georges, two Arcs, A Breeders Cup, Eclipse, an Oaks, Yorkshire Oaks, Irish Oaks – it's an extraordinary CV."

Rouget, who learned his trade as an assistant to Ian Balding and Paul Cole in England and is based at Pau and Deauville, hatched his plan to win this year's Arc the moment Sottsass finished third behind Waldgeist and Enable a year ago.

"This year we had problems to build the best programme for him, but I was encouraged by his run in the Irish Champion Stakes," said the trainer.