We’re going to have to be on top of our game to win key matches’: Captain Heather Knight issues warning as England begin World T20 bid

England begin their bid for glory at the women’s T20 World Cup against South Africa with captain Heather Knight claiming the tournament is wide open.

England last won the World T20 in 2009, and have been runners-up in three of the last four tournaments.

But a 10-wicket hammering by Sri Lanka in their final warm-up game and India’s shock triumph over the Aussies in the tournament opener on Friday has convinced Knight that England are going to have to produce some outstanding cricket if they are going to rule the world. 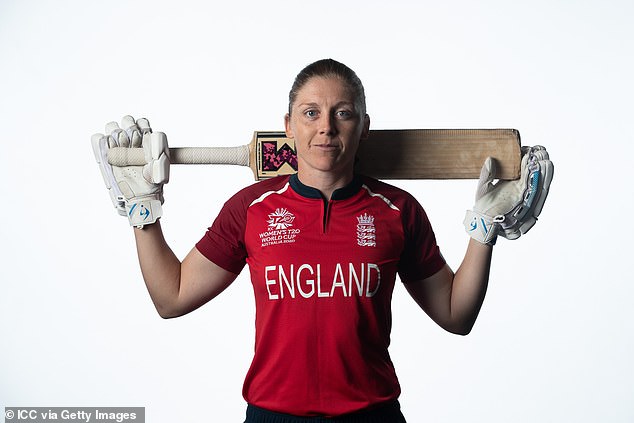 England boast a good record against South Africa, having won 15 of 18 T20 matches

‘We were watching that one from afar,’ Knight said of the Australia v India game. ‘I think it shows this tournament is going to be a very good one.

‘Anyone can beat anyone. We saw in our warm-up loss to Sri Lanka that if you’re not completely on it, you can get found out.

‘It was a little reminder for us that we’re really going to have to be on top of our game to win those key matches.’

That point was echoed by new head coach Lisa Keightley. She said: ‘With this World Cup there are more than four teams vying for the semis. Now if you have a bad day you’ll definitely lose. It’s going to be cut-throat.’

England boast a good record against South Africa, having won 15 of 18 T20 matches. However, South Africa have a strong batting line-up, while Shabnim Ismail is one of the quickest bowlers in women’s cricket. West Indies, Pakistan and Thailand are the others in the group, with the top two qualifying for the semi-finals.

Opener Danni Wyatt believes experience of Australian conditions will stand England in good stead. ‘Quite a lot of us have played in Perth and we’ve got good experience of playing at the WACA, so that will hold us in good stead,’ she said. ‘Obviously our coach has been in charge of Perth Scorchers for the last four years in the Women’s Big Bash, so she’s got great experience of the WACA as well.

‘Tammy Beaumont and myself have both managed to get a few runs in the Big Bash at the WACA, which is nice!’

West Indies enjoyed a seven-wicket win over Thailand in their first group game yesterday. Stefanie Taylor starred by taking three for 13 and hitting 26 not out after the Thais were restricted to 78-9.