The Sydney spring will have three more million-dollar races highlighted by the addition of The Invitation, a $2 million race for fillies and mares over 1400m at Randwick on October 23.

Places in the elite field of 12 will be by invitation only, decided by a Racing NSW panel of experts, and the race will be contested under set weights and penalties conditions. 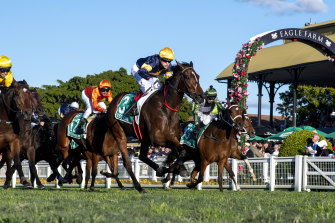 Tofane bursts clear to win the Stradbroke Handicap and would be an ideal candidate for The InvitationCredit:Michael McInally

“As we head towards The Everest and The Golden Eagle, The Invitation will provide a further highlight to spring racing in Sydney with a unique formulation of the field by invitation only,” Racing NSW chairman Russell Balding said.

“The Invitation also provides the Sydney Spring Carnival with a marquee race for fillies and mares.

“The addition of The Invitation and further targeted prizemoney increases consolidates and capitalises on the development and enhancement of spring racing in Sydney over the past five years.”

It would be an ideal target for Stradbroke and Tatts Tiara winner Tofane and give three-year-old fillies a target beyond the Princess Series. The Invitation will take the place of The Nivison, which will be moved to the Spring Champion Stakes card on October 9 and provide a lead up for the $2 million race.

The increases to feature prizemoney come on top of a $20 million boost to stakes across the state, which kicked on July 1.

There are also substantial prizemoney increases to the George Main Stakes and for the 100th running of the Hill Stakes, which will both carry $1 million purses in 2021 and beyond. The aim is to keep the best weight-for-age horses in Sydney and is a response to recent stakes increases by Victoria for its spring.

“The introduction of The Invitation and other strategic prizemoney increases to traditional races has significantly added to the Sydney spring racing program, which will now host an amazing eight straight weeks of $1 million-plus races,” Australian Turf Club chief executive Jamie Barkley said.

“These enhancements will take the Everest Carnival prizemoney to a record $50 million, again proving Sydney is among the leading racing jurisdictions in the world.

“ATC welcomes the increase to the George Main Stakes and the Hill Stakes, races which will attract the best horses in the country to Sydney.

“This maintains Sydney’s foremost position in delivering high value world-class races to our owners and participants.

“This period is Sydney’s time to shine in spring with a globally recognised racing carnival.

Racing NSW has also strengthened the Hunter and The Gong race days with the Newcastle meeting getting a $300,000 staying handicap over 2300m, while there will a $300,000 handicap run over 1000m added to Kembla Grange’s marquee day in November.