Contrary to his own personal predicament, Jack Brooks suggests Somerset’s mantra in pursuit of an elusive first County Championship title should be ‘if it ain’t broke, don’t fix it.’

Brooks, 36, has undergone three operations to get his body right for a 2021 season in which he hopes to inspire a club that has finished as first-class runners-up in each of the last three years.

A man who donned headbands yonks before Covid regulations made them fashionable, and twice a winner with Yorkshire, underwent a major service last autumn as surgery to both Achilles tendons followed a pin being inserted into a thumb fractured fielding in last year’s Bob Willis Trophy final. 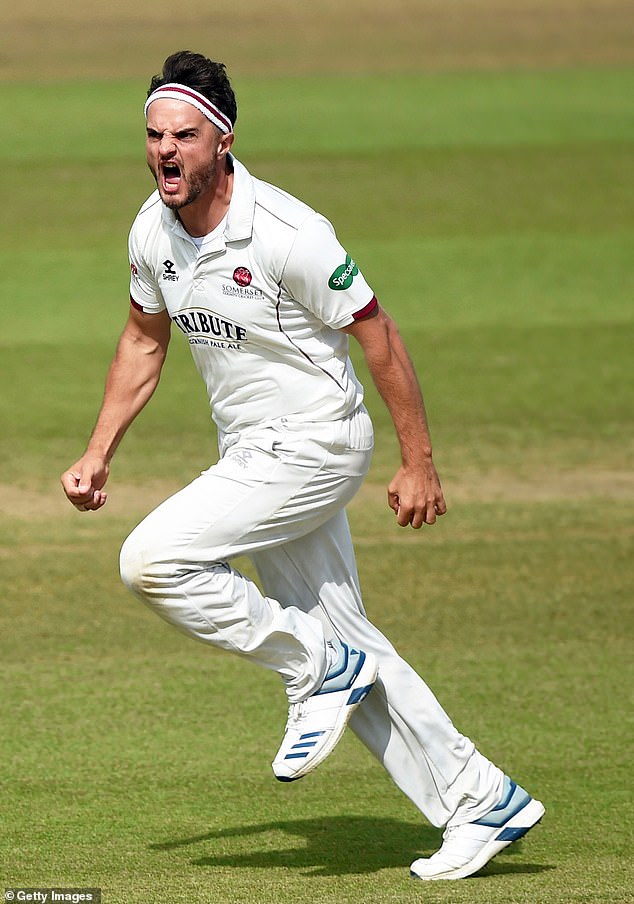 ‘Last year when we were up against it, we came out the other side and set a really good score when we had the worst of the conditions at Lord’s and just got out-played really,’ he said, of being pipped to the silverware by Essex.

‘We didn’t lose the game; we just didn’t do quite enough. It’s a very small margin so there’s no need to make wholesale changes, just be slightly better and tougher in testing situations.’

Brooks hopes to be in contention for a return to Lord’s next week when Somerset begin their campaign against Middlesex, after enduring both heartache and pain at the most famous of grounds last October.

‘Alastair Cook hit one at mid-on and I dived for the ball, it was pretty innocuous, to be honest, but I got my thumb stuck in the ground and the tendon snapped,’ he recalled. 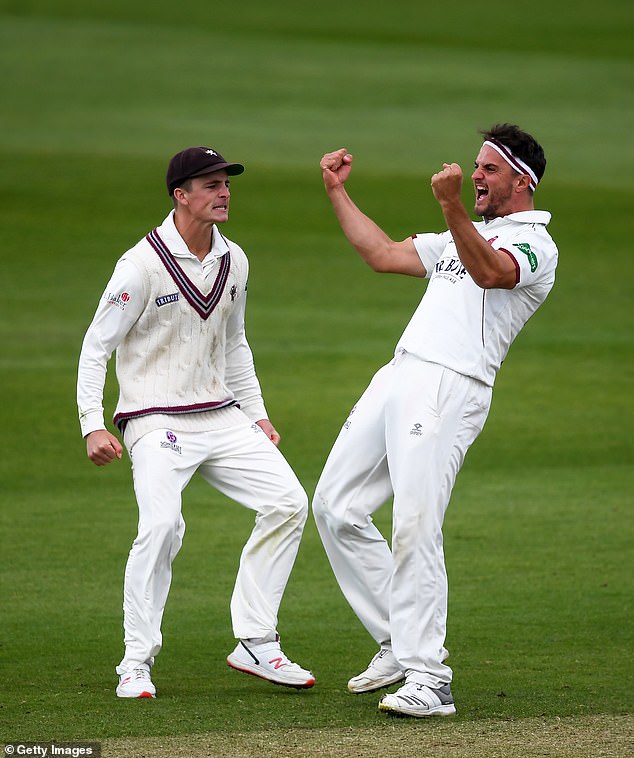 ‘I knew something bad had happened straight away, even though I could move it. I couldn’t physically force the ball into the thumb, so bowling was tough until I taped it up and took a lot of medication. I was buzzing my tits off for the last day.’

Two weeks after the digit was fixed, out came the knife again as world renowned surgeon James Calder, whose sporting client list also includes football royalty Neymar and Gareth Bale, got to work.

‘I had a bone spur taken out, a very badly damaged bursa removed and had a tear in the Achilles itself, all on the right one. The left one was luckily a bit of a clean-up job, replacing the oil, so to speak.

‘It was very challenging, especially when my right hand was in a cast, hobbling around with one working limb. I spent most of my time in bed and didn’t have a proper bath or shower for about eight weeks, so I was using a sit-down chair in the bathroom and wet-wipes, flannels, some old-school tekkers. It was challenging at times.

‘I learned to walk again just after Christmas and now I am back fully training I feel as excited for this season as I have been in my whole career, really. My passion for it is still strong as ever and there’s plenty of life left in me yet, I just need to get the body moving properly.’ 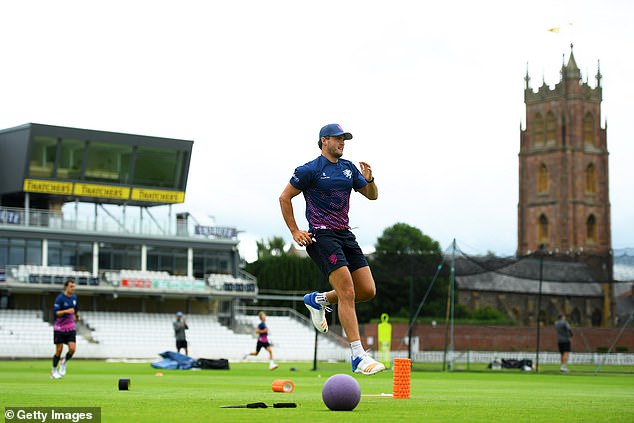 Brooks, 36, has undergone three operations to get his body right for a 2021 season

The close season has also incorporated a house move: having previously rented a room off England spinner Dom Bess prior to his move to Brooks’ former club Yorkshire. ‘Having a 22-year-old landlord is not something you really need in your mid-30s,’ he joked.

Another change has been the departure of assistant coach Marcus Trescothick to England after 30 years with the club: ‘You can’t replace that bloke, can you? Especially when he’s got two buildings and a stand named after him.’

However, according to Brooks, some of Trescothick’s best traits live on in Tom Abell, the Somerset club captain chasing the holy grail.

‘He’s a bit like Tres in that he’s so humble. He lives and breathes the game, especially Taunton and Somerset. He’s like the Lord Mayor walking around town when you go for a sandwich or a coffee with him, knows everybody, and he was in tears the last two years when we haven’t quite won it. It means such a lot to him personally.’

Since the last Championship was contested in 2019, a record eight points for a draw has been introduced, the traditional coin toss has returned and relegation removed via a Conference-style system, suggesting that the route to the pennant might be different this year. 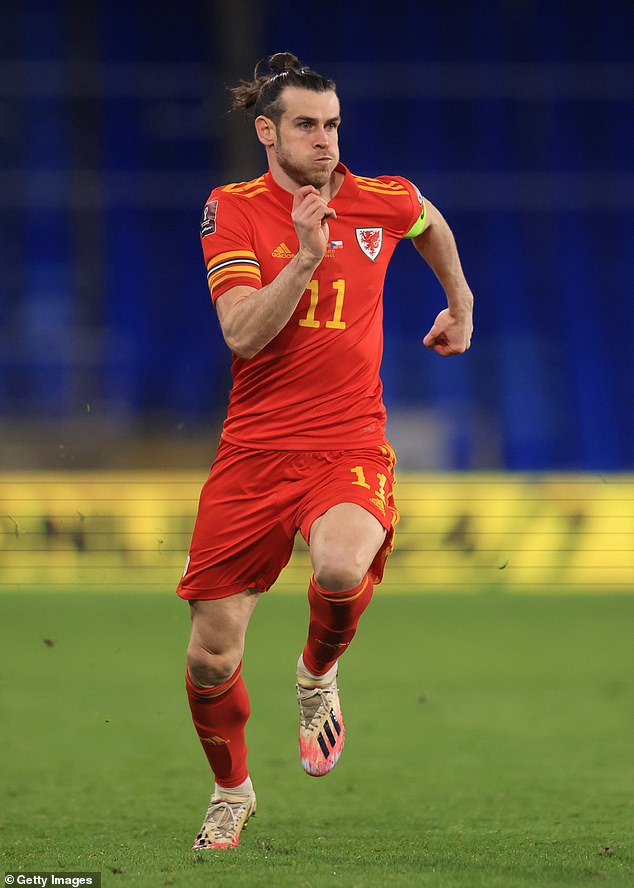 It is hoped that the alterations dictate that flatter pitches are prepared, crease occupation becomes priority again, spinners are given more airtime and the onus shifts between winning and not losing.

‘Even speaking as a bowler, while two- or three-day games can be action packed, there is pressure on you to get wickets and they’re probably not great for producing high-quality cricketers,’ Brooks continued.

‘There were a lot of nerves and disgruntled batters as well. Bowlers didn’t get much time to put their feet up either.

‘When I was at Yorkshire, we knew that we had to win a certain number of games, particularly the home games, to win the title and to stay up you had to get results. You were not going to stay up drawing games. This change looks exciting. There’s nothing wrong with a few high-scoring draws, as long as you don’t get that every game.

‘Certainly, in my time batting techniques have changed. Guys now are boundary-heavy players; there’s not an awful lot of players on the circuit who graft and take you apart bit by bit – a bit like Alastair Cook did to us at Lord’s.’

Until they scratch their Championship itch, it seems references to recent near misses will never be out of the conversation.