Bob Champion became the author of one of racing’s greatest fairytales when Aldaniti triumphed in the 1981 renewal – with both the horse and his jockey having overcome great adversity on their path to Aintree fame.

For Champion, that adversity was a testicular cancer diagnosis in 1979, after which it was discovered the disease was spreading throughout his body and chemotherapy was his only chance of survival.

Aldaniti’s life hung in the balance too, with two serious tendon injuries halting his racing career and causing vets to advise the gelding was euthanised rather than rehabilitated.

Nick Embiricos, the horse’s owner, knew the chestnut was essential to Champion’s recovery and would not allow it, thus leaving one of the most endearing partnerships in the sport intact when Champion was eventually given the all-clear.

What happened next captured the imagination of the world, a four-length victory in the most famous race of all – an emotive triumph over misfortune that was later immortalised both in print and on screen.

Aldaniti was a 10-1 chance for the race, his chief rival being the great hunter chaser Spartan Missile, ridden by John Thorne, but Champion retained complete faith in his horse and had not even considered the possibility of defeat.

“I was so confident of winning, it was unbelievable,” he said.

“You’ll think I must be mad for saying it, but going there I thought it was a formality.

“Then I made a mistake at the first and second fences, but things started to pan out really well after that. I couldn’t see myself getting beaten and I was right for once in my life!” 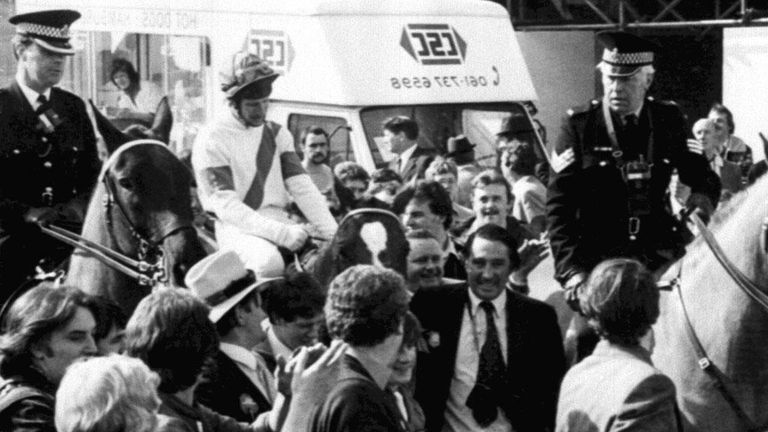 Aldaniti took up the lead over the 11th obstacle and was not passed from then onwards, jumping and travelling with complete fluency, but his passage through the race varied greatly from the one envisaged by trainer Josh Gifford.

“My orders were to hold him up until the last fence,” Champion explained.

“But I had the best run down the Canal Turn that anybody could have had in the race, ever, and everything went so smoothly.

“I went from 29th to jumping to the front in three fences, just round the Canal Turn, which is a very short distance.

“The only reason I made up that ground is because I just had a better run round, I didn’t go any quicker, and then when I hit the front jumping Valentine’s, all I can think about is the b******ing I’m getting in the stands from the guv’nor for getting there too early!

“I realised I was there and I was going at my pace, and I knew he stayed and if I could get him into a good rhythm, he’d jump for fun.

“He took me into a fence, it wasn’t me taking him – he loved every second.”

‘I didn’t have time to celebrate’

Champion knew the agreed tactics had been abandoned at that point and was already arming himself with examples of successful front-running rides to justify his departure from the game plan to Gifford.

“All I could think about then was excuses for why I’m there in front – I went through five Red Rum Nationals in my mind,” he said.

“Also Bob Davies, when he won on Lucius, he took it up too early and still won – I had all those excuses!

“I remember looking to one side and seeing Rubstic, who’d won a couple of years before, and on my other side was Sebastian V, who finished second the same year, so they were another two excuses.

“Eventually when I was two out, I thought ‘I’ve got to keep hold of his head’ because his legs were like glass and keeping him sound was the most important thing.

“So I thought, ‘I’m going to keep holding him together, just hold him together and don’t lose your cool’ – and it worked.” 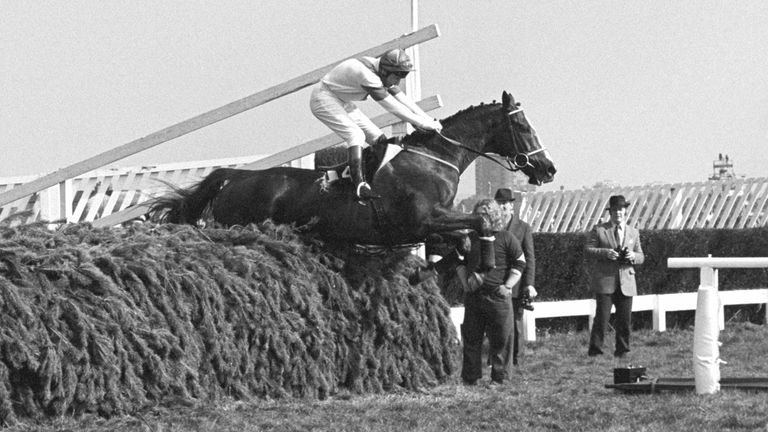 Despite the inevitable outpouring of admiration from all present, Champion’s mind had already turned to the next race and he therefore had little time to bask in what he and his mount had just achieved.

“When I pulled up my first thought was, ‘I did this for all the nurses and doctors in the Royal Marsden (hospital), and the patients, to give them hope’,” he said.

“That was it then, basically it was just back to business. I rode in another race an hour later, so I didn’t have time to really celebrate.”

It was only in the aftermath of victory that its impact became clear, with an influx of donations catalysing the creation of the Bob Champion Cancer Trust, a charity that has since raised more than £15m to fund further research into the two forms of the disease most liable to affect men – prostate and testicular cancer.

Champion’s philanthropy earned him a CBE in the 2021 New Year Honours, a consequence of the 1981 victory that was as unexpected as the success of the charity itself.

“But I didn’t go into the race thinking ‘this is going to lead to the Bob Champion Cancer Trust’ or anything like that. I just wanted to go into the race and win it, because it had really been my ambition for all of my life.

“Everything changed after that day, really.”

The Grand National is a race that moves the public like no other, with many of the sport’s best-known characters participants over the famous fences and the wide-open nature of the race appealing to seasoned punters and novice spectators alike.

“There always seems to be a story involved with it – you’ve got 40 runners, everybody in the country used to have their one bet a year on the Grand National.”

Champion cites the 1973 National as the most outstanding renewal of the race, with the future three-time winner Red Rum claiming the first of his successes from the valiant Australian chaser Crisp, who was carrying a top-weight of 12st.

“The first time I got round was the Crisp versus Red Rum National, and to me that was the greatest National ever,” he said.

“What a performance by Crisp – unbelievable from Richard Pitman – but sadly he got beaten.

“Red Rum had only 10st 5lb, nearly two stone less. It was tremendous.”

The 1973 race is often listed among the sport’s most memorable moments, creating the sort of front-page coverage that has most recently been achieved by the Cheltenham Festival success of Rachael Blackmore.

Champion watched with great admiration as Blackmore took the leading jockey title at the Festival, and is equally impressed by Hollie Doyle’s rise to prominence on the Flat.

“Look at Rachael Blackmore – she’s an absolutely fantastic advert for racing – and Hollie Doyle,” he said.

“They’re two women that have done a fantastic job for racing, and it’s great to see them doing so well. They deserve their success.

“There are plenty of other women too, not just those two – there’s Bryony Frost as well – but they do a fantastic job.

“They’re a great advert for racing and they ride equally as well as the men.”

Champion will no doubt be cheering home whichever horse Blackmore partners in this season’s big race, but he is also confident the favourite will come to the fore.

“The favourite’s the one they’ve got to beat, the Jonjo (O’Neill) horse – Cloth Cap,” he said.

“I was really impressed with him at Kelso, and then the time before that he absolutely bolted up.

“I think he’s the one they’ve all got to beat – he jumps for fun, which is the main thing.

“You keep jumping, you win Nationals.”

Cloth Cap’s jockey Tom Scudamore is part of a racing dynasty that has close ties with the Grand National, something Champion feels would make victory even sweeter for the family.

“What a story that would be with Tom Scudamore, because Tom’s grandfather rode the winner of the National – Michael Scudamore,” he said.

“Then his father (Peter) never won a National, but he and his partner (Lucinda Russell) trained a National winner, One For Arthur.

“Maybe it’s the Tote treble for them with Tom, which I’d love to see. It’d be a great story, with the three generations, and they are terrific people.”