Controversial Cox Plate omission Gold Trip will undergo a veterinary examination upon arriving in Sydney with connections adamant he is fit to race during the spring carnival.

The European import, who was scratched from Australasia’s $5 million weight-for-age championship last Friday on veterinary advice, could make his first southern hemisphere start in the Rosehill Gold Cup on Golden Eagle day.

But Racing NSW veterinarians will inspect the French group 1 placegetter when he arrives in Sydney on Thursday after days of headlines about his fitness for the Cox Plate. The race was subsequently won by the only other international, Ireland’s State Of Rest, who survived a protest from Anamoe.

“The stable have been in contact with us and we’ll go through our processes,” Racing NSW chief steward Marc Van Gestel said.

“As I understand it, the horse has passed the diagnostic tests performed in Victoria. We’ve requested RVL to provide us with that information.

“We’ve asked for a veterinary clearance from the stable and once that’s been provided, he will be trotted up by our veterinarians and we will form a view as to whether he’s suitable to race or not. We’ll do what’s right for the horse.” 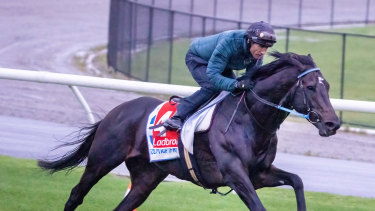 Gold Trip wasn’t passed fit for the Cox Plate, but he will now head to Sydney.Credit:Getty Images

Gold Trip’s co-trainers Ciaron Maher and David Eustace both expressed frustration the five-year-old entire wasn’t allowed to run in the Cox Plate, with Racing Victoria concerned with his lameness.

Racing Victoria said a total of six veterinarians inspected Gold Trip in the 48 hours before the Cox Plate and were unanimous in their position not to let him run.

But now a decision is likely to fall to Racing NSW, with Gold Trip immediately made a $3.30 second pick with Sportsbet for the Rosehill Gold Cup behind the flying Think It Over ($3).

“We’re going to nominate him for the Rosehill Gold Cup and he’ll campaign here in the autumn anyway,” said Gold Trip’s owner Jamie Lovett from Australian Bloodstock. “We thought he was suitable to race in the Cox Plate.”

Champion jockey Damien Oliver last week said he was mystified with the fact he wasn’t consulted about Gold Trip’s fitness before the Cox Plate.

“I find it unusual that no one has actually asked me how it felt, because I’m the one putting my neck on the line riding the horse,” he told Racing.com. “I’ve ridden internationals before, I haven’t felt comfortable on them before and actually volunteered that this horse isn’t right.”

Racing Victoria vets didn’t clear Peter Moody’s Nickajack Cave in the autumn, but he was allowed to race in Sydney in the group 1 Tancred Stakes, won by the ill-fated Sir Dragonet.

There were more Melbourne Cup casualties with Danny O’Brien’s Young Werther joining Bjorn Baker’s Harpo Marx in being taken out of contention on Monday having had CT scans which identified areas of concern.

Harpo Marx was a late scratching before the Moonee Valley Gold Cup when Racing Victoria vets received the results back of his diagnostic test, which was performed last Tuesday.