Australian all-rounder Daniel Sams is in isolation after testing positive for COVID-19 in India ahead of the Indian Premier League.

In a statement issued on Twitter on Wednesday afternoon (AEST), Royal Challengers Bangalore revealed that Sams, 28, had not displayed symptoms but had tested positive for the virus on Wednesday ahead of the start of the IPL season this weekend. 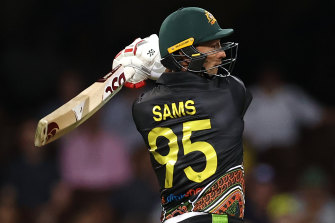 “Official Statement: Daniel Sams checked into the team hotel in Chennai on April 3rd, with a negative COVID report on arrival. His report from the 2nd test on 7th April came positive. Sams is currently asymptomatic and he is currently in isolation at a designated medical facility,” the Challengers tweeted.

“Royal Challengers Bangalore medical team is in constant touch with Daniel Sams and continue to monitor his health and abide by the BCCI protocols.”

Veteran Australian leg-spinner Fawad Ahmed contracted the coronavirus earlier this year during his stint in the Pakistan Super League. He recovered, although the virus killed his mother last year.

“But this virus, it’s bloody tough. I struggled, but I can’t imagine how older people and poor people are struggling with this virus,” Ahmed told cricket.com.au last month.

“[Mum] never watched me playing cricket [in Australia], I really wanted her to come to the beautiful MCG and see me play in the Big Bash, or club cricket at Melbourne Uni so she could watch me with her own eyes, not on the telly.

“She was one of my biggest supporters.

“It’s life, you can’t control those things unfortunately. But I think she’s in a better place and she’s watching down on me.”

Indian great Sachin Tendulkar was recently hospitalised in Mumbai as a precautionary measure in response to contracting COVID-19.

The 47-year-old had quarantined at home before that with mild symptoms.