Adelaide: Mitchell Starc has revealed how close Australia came to having their entire first-choice attack wiped out by a COVID scare, after he and Nathan Lyon kept the home side’s foot on England’s throat in the second Test.

Senior pair Starc and Nathan Lyon took matters into their own hands on Saturday, defying batting-friendly conditions to bowl Australia into a near impregnable position.

The pair claimed six of the eight remaining wickets on the third day before Marcus Harris, in potentially a make or break innings for his career, survived 17 overs under lights to steer Australia to 1-45 at stumps, a lead of 282.

This game could be in an entirely different shape if captain Pat Cummins had not brushed Starc and Lyon at dinner on Wednesday night.

“It was just fortunate we were sitting outside. It was almost a bit of a piss take because Pat didn’t reply to a message we thought we’d sit away from him and sit outside,” Starc said. “That’s pretty lucky.”

If Cummins had responded, Lyon and Starc may well have found themselves sidelined, leaving Australia with a second-string attack of third-gamer Jhye Richardson, debutant Michael Neser and one of the uncapped Scott Boland or Mark Steketee, with untried leggie Mitchell Swepson taking Lyon’s place.

Richardson was not as his best in his first Test in nearly three years while Neser was limited to just 11 overs, the pair combining for the figures of 1-111 from their 30 overs. They were bailed out by Starc and Lyon, as England crumbled for the third time in as many innings to be dismissed for 236.

This Ashes series is only seven days old but a remarkable turnaround is required in the next two days to stop Australia from taking a 2-0 lead to Melbourne, and in the next few weeks for the urn to fly back to Heathrow.

On available evidence, the Australians are a class above Joe Root’s England side, whose best is competitive but worst is barely Test level.

The absence of Cummins and Hazlewood was felt during a wicketless first session but once Cameron Green broke another considerable partnership between Root and Dawid Malan during an incisive spell after tea, Australia steamrolled the visitors’ hapless batters.

Playing the percentages, Steve Smith knocked back the opportunity to send England back in under lights to face the new pink ball, knowing that if Australia bat well on Sunday the chance will present itself on the fourth night with his bowlers having an extra 24 hours to rest. It also leaves open the prospect of a second new ball on the fifth evening to finish off the job in the unlikely occurrence the game gets that far.

Starc said the bowlers were not consulted in the decision-making process but endorsed the call to bat again.

“In terms of where it sits now we hold all the cards with when we want to bowl, how big a lead we want to have,” Starc said. “The night sessions are a big striking session with the ball. We’ve got a few options on the table now.“

There was an added bonus in the final hour when Harris, under the pump after a lean start to the series, gave himself a chance to play a potentially career-defining knock by seeing off James Anderson and Stuart Broad.

Encouragingly for Harris, he remained calm, at least outwardly, after a breakdown in communication led to David Warner being run out. That Warner gave up his wicket was a tacit admission by the veteran of his culpability.

Seldom will England’s top six get a more favourable scenario than the one presented to them under cloudless skies on a pitch, though offering encouragement to Lyon, that had flattened.

But they could not take advantage of an undermanned Australia attack. England’s total of 236 was only marginally better than the 223 an outclassed West Indies team managed in Hobart in 2015 – the last time Australia fielded an XI with just one of its big three quicks.

Starc performed in the manner an elder statesman should, demonstrating the control that was vital with his long-time pace cartel mates sidelined. 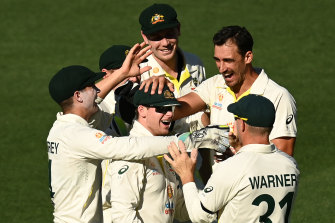 Mitchell Starc (right) celebrates one of his four wickets in England’s first innings.Credit:Getty

Supported by some sharp catching in the cordon, Starc pouched two important wickets during a productive seven-over spell in the middle session.

He outwitted Malan in his first over, enticing the No.3 to chase back-to-back square boundaries to a ball which was too close to his body to play with a horizontal bat.

Jos Buttler had no answer to Starc’s angle across him, playing and missing several times before eventually snicking his 15th ball in a classical left-armer’s dismissal. His duck was just as miserable as his display with the gloves.

“We saw that at the Gabba [with the ball] going across him, we thought the pink ball through the middle period was starting to fade a little bit,” Starc said. “It wasn’t reversing, but it seemed to fade away from the shiny side so I was trying to go across him.”

Green is yet to make an impact with the bat but is making invaluable contributions with the ball. The all-rounder set the tone after the main break, drying the runs before claiming the big wicket of Root.

Operating in the fourth-stump channel with a fuller line than the frontline quicks deployed in the first session, Green capitalised on Root’s desire to feel leather on willow, drawing a pointless prod on 62.

Root was furious at himself, not just because it was the eighth time he had failed to turn a 50 into a breakthrough ton in Australia but at the vulnerable position he had left his side in.

As captain Root, who passed Michael Clarke, Sachin Tendulkar and Sunil Gavaskar into fourth for most Test runs in a calendar year, will feel the need to carry his side but the reality is he can only do so much, and more should be following his lead.

Ben Stokes’s cameo drew brief comparisons to his miracles at Headingley but he chopped onto his stumps from Green in the hunt for boundaries.