Bowlers around the world watch out. David Warner is back – and Australia might be as well.

Australia’s Twenty20 World Cup campaign is building momentum after the veteran opener powered his team to an emphatic seven-wicket victory over Sri Lanka. 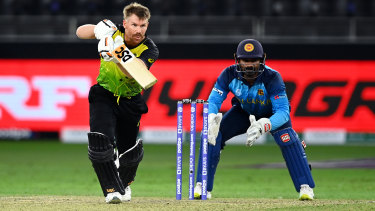 David Warner set up the run chase with a destructive 65 off 42 balls.Credit:Getty Images

After more than 12 months of indifferent performances in the shortest format, Aaron Finch’s men are finding form at the right time.

Unconvincing in their first-up win over South Africa, Australia overcame a slow start with the ball then turned in a clinical display with the bat to overhaul Sri Lanka’s target of 155 with three overs to spare.

Warner set up the run chase with a destructive 65 off 42 balls after player-of-the-match Adam Zampa turned the game with an excellent spell of 2/12 from four overs.

Victory over the world No.9 may not appear that impressive on paper, but Sri Lanka are match-hardened and accustomed to the local conditions after winning their way through to the Super 12s against the associate nations.

The litmus test for Australia will come in the early hours of Sunday morning (AEDT) when it takes on white-ball pacesetter England, and they will approach the assignment with a lot more confidence than they would have a week ago after veteran duo Finch and Warner turned the clock back.

The pair’s 70-run partnership was Australia’s highest opening stand since they put on 98 in game one of the series against England at Southampton, 22 matches ago. 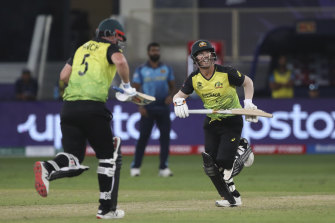 Finch and Warner’s opening stand was the highest in 22 matches.Credit:AP

Despite a lean run for franchise and country, the dynamic opener was confident he was not out of form – and he showed why with a typically brutal knock, ensuring there would be no repeat of the scratchy run chase against the Proteas.

Helped by some substandard fielding, Warner routinely found the gaps through a combination of power and placement.

He had a big slice of good fortune on 18 when wicketkeeper Kusal Perera put down a dolly which travelled to him so slowly the bowler, Dushmantha Chameera, launched into premature celebrations, and the umpire had begun raising his finger.

Finch’s return among the runs is another promising sign for the Australians. The skipper smacked 37 off 23 balls, capitalising on anything short and wide, and driving with confidence deliveries that were over pitched. 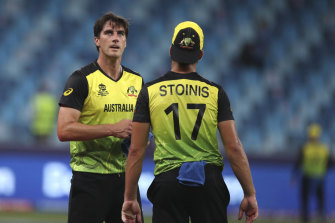 Steve Smith and Marcus Stoinis continued their impressive start to the tournament, finishing off the run chase with minimal fuss.

Zampa was Australia’s game changer with the ball, denting Sri Lanka’s innings with a brilliant spell during the middle overs. Bowlers are rarely given four consecutive overs to prevent batters from getting into a groove, but the Sri Lankans could not read the leg-spinner’s variations.

A total of about 180 appeared on the cards when Perera and Charith Asalanka were at the crease but their departures in successive overs, to Mitchell Starc and Zampa respectively, hobbled their run rate.

Starc, who has had limited match practice, overcame an injury scare to play, claiming 2/27 in a much improved performance, while Josh Hazlewood and Pat Cummins were also important.

The only concern with the ball was with their fifth and sixth bowlers, Glenn Maxwell and Marcus Stoinis, who conceded 51 runs from their overs.

Sports news, results and expert commentary. Sign up to our Sport newsletter.