Andrew Symonds thrilled millions as a supreme cricketing athlete during his short and turbulent career, but was happiest as a solitary figure in the great outdoors.

As the game came to terms with the untimely death of another star just two months after losing Rod Marsh and Shane Warne, Symonds was remembered as someone who never wanted to be far from his dogs or his fishing boat.

Symonds died following a single-vehicle crash in Hervey Range, around 50 kilometres from his home in Townsville, on Saturday night, police said in a statement.

Speaking in Townsville, Patrol Inspector Gavin Oates said the cause of the crash was still being investigated but at this stage there was nothing to suggest alcohol was a factor. A report will be prepared for the coroner.

“He couldn’t care less about money,” Simpson recalled on Tuesday. “He had three great passions in his life, his kids, the outdoors and cricket.” 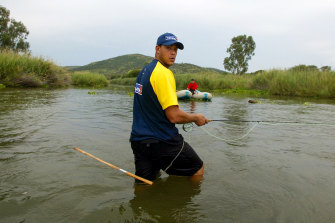 As another confidant said: “All he wanted was enough money to fill his boat with petrol and buy a carton of beer to throw in the back.”

Symonds lived a simple life with income from the investments he made during his playing days, particularly the IPL, when he was the highest-paid overseas player at the 2008 auction with a contract of almost $2 million.

But 2008 was also an unfortunate turning point in Symonds’ career, when Cricket Australia failed to back him over a racial vilification charge for fear that India would abandon its tour, which would have decimated Australian cricket financially.

Harbhajan Singh, the man at the centre of the Monkeygate saga, and Sachin Tendulkar, the batsman at the other end, reconciled with Symonds’ during his time in the IPL, as Tendulkar highlighted with a tweet on Sunday. 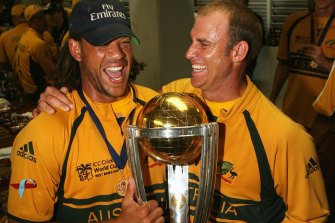 ”Andrew Symond’s demise is shocking news for all of us to absorb,” Tendulkar wrote. “Not only was he a brilliant all-rounder, but also a live-wire on the field. I have fond memories of the time we spent together in Mumbai Indians. May his soul rest in peace, condolences to his family & friends.”

Symonds reconnected with Australian cricket through his commentary on Fox, where he could maintain his cricket fix and showcase his self-deprecating humour.

His standing in the game is highlighted by the admiration and respect greats such as Ricky Ponting, Adam Gilchrist, Shane Warne and Mike Hussey had for him.

“If Roy shook your hand you had his word,” Ponting said from India, where he is coaching the Delhi Capitals in the IPL. “That’s the sort of bloke he was and that’s why I always wanted him on my team. An extraordinary player and even better human being. Can’t believe he’s gone. Thoughts are with his family at this time.”

Gilchrist described Symonds as “a heart and soul type of guy that just made you happy.”

“It was the most pure approach to sport from Symmo. It was simple: you play it because you enjoy it, you work hard, and then after it – win, lose or draw – you dust yourself off with your mates, and then you go again,” Gilchrist told radio SEN.

Longtime Queensland and Australian teammate Michael Kasprowicz remembers Symonds as the most popular player in the dressing room.

“All his mates, you’ll find, will speak so highly about what a great bloke he was, how loyal he was,” Kasprowicz said.

“In those team environments he was such an invaluable team member because he was a guy that was keeping things positive through humour. It’s just the way he was.”

His great fishing mate Matthew Hayden sent a message from India, where he is commentating.

“Symmo once said to me, ‘anything that can’t be said in three words or less is not worth listening to’. Well, ‘Bloody good bloke’ are my three words, the rest can be embellished over time and over a nice cold XXXX Bitter off the tap in heaven.”

Brian Lara and Shoaib Akhtar expressed their shock on Twitter.

“We exchanged messages just hours ago… what’s really going on?” Lara wrote. “Baffled and heartbroken! How could we lose another iconic figure in our sport so soon? RIP Roy, Condolences to Andrew’s family and close friends.

“Devastated to hear about Andrew Symonds passing away in a car crash in Australia,” Shoaib said. “We shared a great relationship on & off the field.“