Western Australia allrounder Nicole Bolton has admitted she came to Sydney to reignite her love for cricket after producing a stunning bowling spell to take the Sixers to a win over her old team last week.

The international star penned a two-year deal with the Sydney Sixers in August after realising she needed a “challenge” to reinvigorate her own game after six seasons in Perth.

And the move paid off immediately, with the 32-year-old taking 3-11 against the Scorchers – proving the 32-year-old still has what it takes to rip through opposition batting orders.

Bolton shocked WA when she announced her retirement from state cricket last month, bringing to an end a 15-year career with the WACA after debuting at 16.

As she enters the back end of her first WBBL season on the east coast, Bolton said she decided to leave after she came to feel she wasn’t contributing enough to her state cricket program.

“I saw that maybe towards the back into my career, there might a new opportunity and a different experience that would sort of make me enjoy my cricket again,” she said. “I felt that I probably wasn’t giving enough of myself and probably thought a change was probably best.” 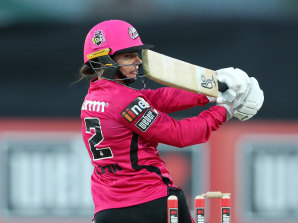 Sixers allrounder Nicole Bolton has starred in her first season with the club. Credit:Getty

Another factor in Bolton’s move was the number of international teammates in the Sixers. After years of playing with them for Australia, Bolton said she was eager to play more cricket with Elysse Perry, Alyssa Healy and Ash Gardner.

“It was really appealing to me because they are some of my good mates that I spend a lot of time with,” she said. “Being in the WA with both the Scorchers and the state team for so many years, I saw this as a really unique opportunity.”

Bolton is still based out of Perth, but she refused to stay at home when visiting Western Australia last week, remaining at the Sixers’ team hotel.

“There was no way I was going back home,” she said. “I just want to immerse myself in the whole [Sixers] experience.”

The Sixers are sitting fifth on the WBBL ladder after backing up their win over the Scorchers with a victory over the Hobart Hurricanes last Wednesday. It was the first time the Sixers had mustered back-to-back wins since the first two games of the season.

Perry celebrated her 31st birthday by steering her side to a 31-run win against Hobart.

Coach Ben Sawyer has reinstated the side’s original batting in recent weeks, having pushed Perry down to No.4. The move raised eyebrows for many Sixers fans and failed to pay off.

Sixers quick Maitlan Brown said the decision to put Perry back on top of the order had restored the side’s balance.

“I think it’s really nice the combo of Pez [Perry] and Heals [Healy],” she said. “It’s just a really nice balance. Then Shafali [Verma] can come on and have a big hit when the ball gets a bit older.”