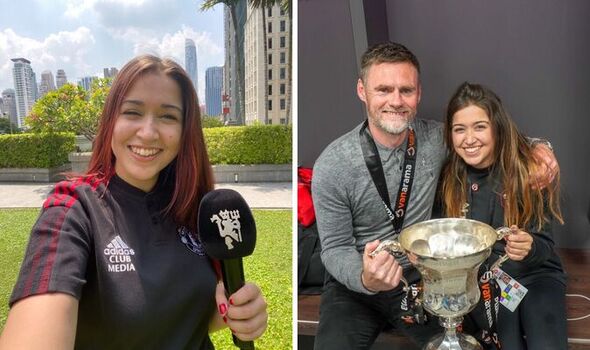 Zarah Connolly has burst onto the scene in recent years as a talented young presenter plying her trade at Class of 92-owned Salford City and Manchester United. Her infectious personality has earned widespread plaudits, publicly and behind the scenes, but so much more has contributed to landing a dream role at one of the world’s biggest football clubs.

Zarah, 26, started as a broadcast journalism student at Salford University with the ultimate career goal of becoming a full-time presenter. A work experience stint at United during her first year of University, looking after the club’s official app on matchdays, came as a surprise given it was only open to third-year students.

But Zarah impressed, and it soon turned into a presenting gig on the club’s popular social show Fan Forecast – raking in over a million views on Twitter and 800,000 on Facebook. From that opportunity came further opportunities, most notably a request from Sky Sports to travel to Anfield and team with Gary Neville against Jamie Carragher’s team of Liverpool fans.

Neville, United icon and Salford co-owner, was particularly impressed with Zarah shutting down Carragher during the debate and, to her surprise, emailed a meeting invite just days later. He had seen something in her and offered a full-time role as Salford’s presenter, creating content for their online channels.

It was Zarah’s first full-time gig in sports media and the initial boost for her rocket-launched career, but just two months later, in December 2017, an Ulcerative Colitis diagnosis prompted life-saving surgery. And, after being told her full-time working days were potentially over, she has emphasised just how significant a role Salford as a club played in her recovery.

She told Express Sport: “Salford were phenomenal with me, and they really supported me through a lot. In December 2017, I got diagnosed with Ulcerative Colitis and had major surgery in 2018-19 to save my life. With that illness, I got told that it was extremely unlikely I’d be able to carry on working within sport with the way I run around pitches and work seven days a week. But through the help of the club and the physio team, I’m able to be back to (near enough) myself!”

A few years later, Zarah moved on from a memorable stint at Salford, during which she was at the heart of their promotion to the Football League in 2019. She successfully applied for a full-time Assistant Producer and Presenter role at United and has flourished at Old Trafford since.

“My role at United is really fun,” Connolly explained. “I’m doing so much different stuff every day! One day I could be presenting pitchside, and the next, I could be pushing buttons on EVS in the gallery. It’s a great role to be in as I’m able to create a lot of different types of content and come up with ideas and pursue them.”

There remains a common enemy in football and other sports, though, and Zarah, despite her talent and success at such a young age, has experienced high levels of sexism on social media. There is little escape from such discriminatory abuse when performing in a media-based position. But she has hailed campaigns such as ‘HerGameToo’ that actively tackle the issue and make football a game for all.

She continued: “I think social media is a great tool as it gives everyone a voice, but I think it also can cause a lot of harm without the right vetting. I have had lots of hate online for working in football. You get told the usual comments to ‘get back in the kitchen’ or ‘why is she talking about football’? Then sometimes it gets quite personal, and there’ll be people you’ve never met asking for you to get sacked or, even worse, to be sending death threats.

“It gets really hurtful, and you’ve just got to report it and then try to move past it as you’d hope that with more exposure to these kinds of things, social media organisations like Twitter will put more security steps in place to tackle the abuse that people get online. It really helps that there are new campaigns around now, such as ‘HerGameToo’, which will tackle these kinds of issues as we’d hate for young female talent to be deterred away from sport due to the way people treat you online.”

And Zarah’s abuse has leaked into real-life situations away from Old Trafford. While simply doing her job among male-dominated crowds, she has been targeted with vile sexism and, on one occasion, was ‘grabbed’ by an abuser. In response, Zarah has urged anyone who suffers the same scenario in the workplace or at sporting events to report it.

“I haven’t experienced sexism at United. However, I have when I’ve been at other grounds,” Connolly admitted. “I remember specifically when I was filming an Instagram story on my phone, and there was a drunk male fan shouting abuse at me for the entire time I was working. I tried to ignore it, but then he literally came out of the stand to grab me to tell me to get out of the stadium as I was clearly there ‘just to get attention’.

“It really scared me, to be honest, but thankfully the stewards clocked him straight away, and he got kicked out. It made me realise, too, that anything that you hear that’s derogatory or abusive needs to be reported straight away as there’s no place for people in sports like that.”

Delving deeper into her position at United, Zarah explained there are plenty more males than females working in the media department. However, she has hailed the Red Devils’ attempts to encourage more female representation at the club, pushing the motive that it’s something to be proud of.

Female ‘role models’ at United help do precisely that, while the club also gets involved in different campaigns like ‘Change the Game’. And Zarah believes that such steps from United and other clubs will prompt a more balanced ratio of males and females in sports media in the coming years.

“I’d say, in general, there are a lot more males than females, which is what you would expect. But United are phenomenal at encouraging more females in the workplace. In the past couple of months alone, I’ve witnessed constant webinars, inspirational females in sports events and more so with their ‘Change the Game’ campaign. Throughout it all, they have shown that being a female in this industry is an asset and something to be proud of at United.

“There are incredible role models in my team. I work quite closely with a producer called Heidi, who has welcomed me in, and then you have role models like COO Collete Roche, who is phenomenal too. I honestly think if you give it five years, there will be a more equal balance of the ratio of males to females in the workplace for sure.”

Earlier this year, the Manchester United Foundation celebrated its 15th anniversary of helping the younger generation get into football in and around Manchester. And Zarah has lauded the Foundation’s attempts to encourage girls to enter the world of football.

“Manchester United Foundation is phenomenal at encouraging young girls to get into the sport as they have lots of opportunities, even offering football with education with their RTC course. The Foundation also really push female participation in sport by going into schools and letting girls take part in sports at a young age, so it’s normal to them, which links into the pathway up to the first team.”

And Zarah does her own bit for women’s football, maintaining her links with Neville and Salford by running the club’s ‘Lionesses’ team. The co-owners created the open-age team to boost female participation in the beautiful game, and she is partly the heart and soul of it.

“One thing I’m really proud of is that I run an open age women’s team, Salford City Lionesses. The team was built by the co-owners of Salford City to increase female participation in sport and be accessible to all, free-to-play for the community so talent will prevail and nothing else gets in the way.

“It’s so important for that! At Salford, we have some of the girls that are on that course, and they are so grateful for it as it’s opened a pathway up for them where they can play and learn their craft but also have a backup plan whilst learning courses, such as sports and nutrition!”

In a message to women aspiring to enter sports media, and sports in general, Zarah told Express Sport you must ‘be your biggest fan’ and ‘if you work hard, you’ll reap the rewards’.