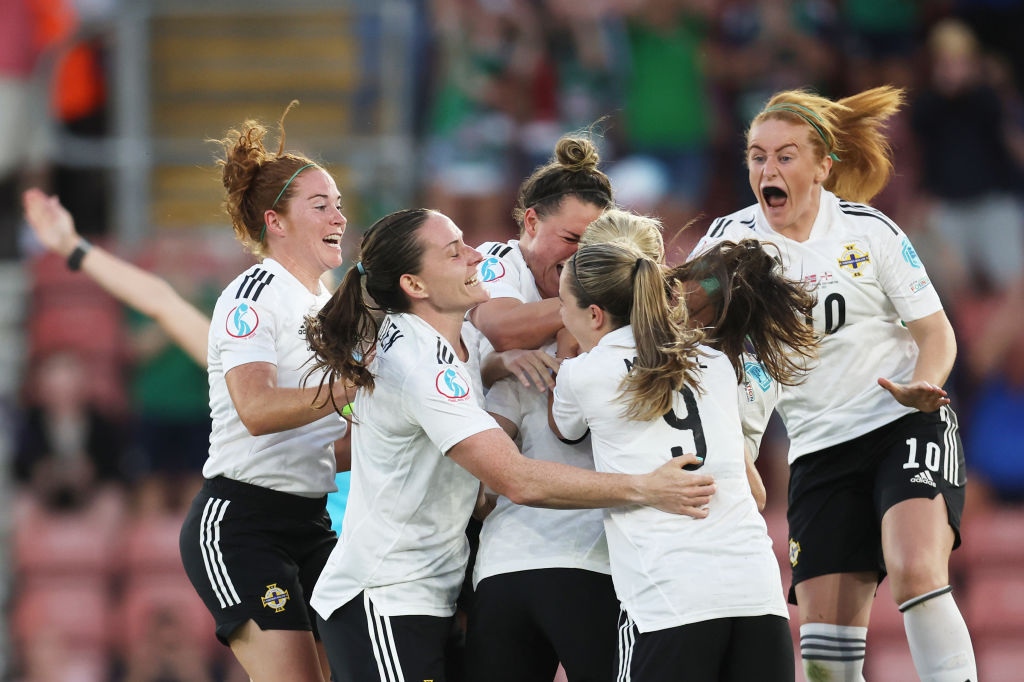 Nerves got the better of Northern Ireland Women in their 4-1 defeat to Norway on Thursday night, but they can still take pride from their major tournament debut.

That is the opinion of manager Kenny Shiels and defender Julie Nelson, who made history as her country’s first goal scorer at a major tournament.

Norway were always the favourites to win at St. Mary’s Stadium and they raced into an early lead, with goals from Julie Blakstad and Frida Maanum after just 13 minutes, before Caroline Graham Hansen’s penalty, awarded by VAR for handball, put them 3-0 up before the break.

However, as the game wore on, Northern Ireland grew in confidence and Nelson’s header just after the restart gave them hope of an improbable comeback.

But it was not to be, as just minutes later Guro Reiten’s low free-kick ensured a comfortable victory for Euro 2022’s dark horses.

‘We were a little nervy in the first 15-20 minutes, our first experience of a major tournament,’ Nelson told BBC Sport.

‘We knew it was going to be a difficult task. We restricted them to not many chances in the second half and made ourselves hard to beat. That is what we need to do.

‘It felt like a home game. We’re disappointed with the result and the manner in which we conceded. We can take heart from the performance after that.

‘I definitely did not think it would be me on the scoresheet, but it is an incredible feeling to score Northern Ireland’s first goal in a major tournament. As a defender, you don’t expect to score the first goal. I had to do a double-take to check it had gone in.’

Northern Ireland were not expected to get out of Group A, which also contains hosts England and Austria, but Shiels reiterated that this is all part of the process of improving the national team for the future.

‘The scoreline was hard to take, I thought we deserved better than that but we are three years into this programme and it will take 10 years to take us into the top 20 in Europe,’ the manager said.

‘You are not happy when you get beaten 4-1 but there are extenuating circumstances. They were nervous for the first 25-30 minutes.

‘If we can continue to progress then we can do it a bit quicker. We have to get real and understand this is an emerging game in Northern Ireland. We have created a monster because we have grown too quickly and are playing against teams of this ilk.

“We matched them for the last hour, they had more territory, but we got one v one and did a lot of good stuff. We created, got in behind for half an hour of the match and we pinned them back.

‘That gives us encouragement and the girls were superb, they gave everything for their country and the fans will be very proud of them. The experience is brilliant for them.’